Like most things the Morrison Government implements, recent sweeping changes to Medicare rebates affect our most vulnerable citizens and have been rushed through under cover of night, with scarcely a murmur from the Government or its media cheer squad.

Prior to the last Federal Election (and the one before that), then-Opposition Leader Bill Shorten warned of the Government’s intention to whittle away Medicare benefits – a long-held Coalition policy objective. As with most Labor Opposition criticisms of the Federal Government, however, this was weaponised by the mainstream media, turned against the messenger instead of the perpetrator and promptly labelled “Mediscare 2.0”.

'Cutting Medicare is in the Coalition’s DNA. Scott Morrison has launched the biggest attack on Medicare in decades with one in six rebate items changing.'

However, planned Medicare cuts were indeed on the Morrison Government’s agenda — they just weren’t communicated until they were done and dusted.

And on 1 July, some 900 items were reduced or removed altogether from the Medicare benefits schedule. Items with altered or deleted status affect orthopaedic, general and vascular surgeries and screening tests such as MRIs. The Government's speedy adoption of these changes means details are still being quantified by private health insurers and the AMA.

‘In the election campaign in 2016, the Coalition strenuously denied they would ever make any changes to Medicare and here, under the cover of a pandemic, they are sneaking in 900 changes to the basic safety net that people rely on more than ever.’ 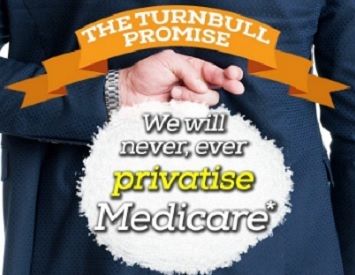 We should be scared about the Liberal Party's plans to privatise Medicare, because that is exactly what they want to do.

The changes are the result of a five-year review by the MBS Review Taskforce, which, according to the Health Department website:

‘…has considered how more than 5,700 Medicare services can be aligned with contemporary clinical evidence and practice and improve health outcomes for patients.’

It is hard to imagine how removing access to items required for surgical procedures and tests, virtually overnight and without allowing time for their proper implementation or planning by health professionals and patients dealing with their consequences, can be considered an improvement, however.

The AMA website published the following statement from President Dr Omar Khorshid, who did not mince words:

...Giving the sector just weeks instead of months to change over its entire system to support almost 1,000 changes leaves the health system and patients at risk.

The Government's reminder to doctors to consider patients' circumstances when charging fees misses the point. At the moment there's no way for doctors to know if they are charging a gap due to the chaos caused by the Department's poor implementation.

Not included in the 900-odd Medicare changes indicated above, wide-ranging changes to Pharmaceutical Benefits Scheme (PBS) listed medications are also coming into effect without warning. They include the alteration and deletion of a range of pharmaceuticals used primarily for cancer treatments and auto-immune diseases.

Many shared their experiences on social media of fronting up to the pharmacy pick up their usual prescription and, without warning, being charged $89 instead of $6.99, for example.

One high-profile deletion scheduled for 1 December, is sertraline, more commonly known as Zoloft — a widely prescribed anti-depressant. It is yet to be determined what this will mean for the cost of this product and IA has sought clarification from the PBS as well as the manufacturer.

Another inexplicable deletion involved the free shingles vaccine (Zostovax) for seniors over 70, which would require them to pay around $200 for the privilege.

However, Independent Australia understands access for over-70s was reinstated following an uproar on social media, after which Health Minister Greg Hunt promptly proclaimed the Government’s intention to extend the free vaccine for another two years. Or, perhaps, at least until its next planned deletion can go unnoticed.

When not intent on dismantling it, the Coalition’s relationship with Medicare has been characterised by constant sabotaging of the free basic health care system since Medicare was introduced by the Hawke Labor Government in 1984. 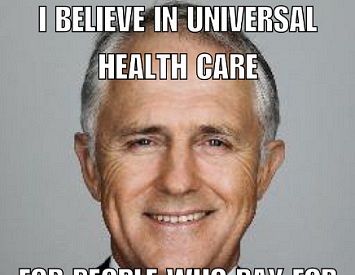 Liberal attacks on Medicare are anything but Christian

With so many vulnerable Australians relying on quality public health care, a government claiming to uphold Christian values would do well to contemplate the timeless question: what would Jesus do.

A brief history of the Coalition’s obsession with Medicare reveals vehement policy opposition at four elections, a series of significant cuts when in government and culminates with this latest quiet achievement of delisting or reducing 900 separate medical benefits and making many commonly prescribed medications unaffordable.

Current Minister for Health Greg Hunt announced his intention to do away with Medicare and opt for a U.S.-style health system in his maiden speech to parliament, back in 2002.

The whittling away of our health care system has always been the end game for Coalition governments, but they have faced much opposition and outrage over the years. It is hardly surprising, then, that these latest health service “changes” are delivered by stealth while we are distracted during a pandemic.

'Cutting Medicare is in the Coalition’s DNA. Scott Morrison has launched the biggest attack on Medicare in decades with one in six rebate items changing.

This is what we said they were going to do and the Government needs to tell the Australian public what is being cut and why.'