Margie Abbott has received saturation press by defending her husband, “sensitive” Tony, but Denise Allen is far from convinced about his “feminist” credentials.

SO, MRS ABBOTT – “Margie” – you seem to be a tad upset at the so-called “personal” attacks on your husband?

For the past two years, Labor and swinging voters (and no doubt many small “l” Liberals) both women and men, have had to put up with the relentless, nasty, vicious and very ugly attacks on our Prime Minister that your husband has ignited and angrily fanned because of the petulant, spoilt brat, born-to-rule dummy spit he has raged ferociously with the Australian public since 2010, because the Independents didn’t give him the nod to be PM.

Ever since your husband failed to convince the Independents he would be a man of his word and a decent Prime Minister, who would do everything they wanted – except of course ‘selling his arse’ (though he’d consider it) he has set about wrecking the place with his constant negativity; his talking down the economy; and his “No, no, no” to every forward thinking policy Labor has passed through the Parliament and implemented ― despite your husband’s schoolyard tantrums.

You, like us, must have seen him proudly stand in front of the ugliest, brutal placards ever displayed about any Prime Minister. As a fellow woman, you must have been disgusted. Then again, Browyn Bishop and Sophie Mirabella weren’t, given they stood in front of them as well — so maybe it’s a Liberal thing. 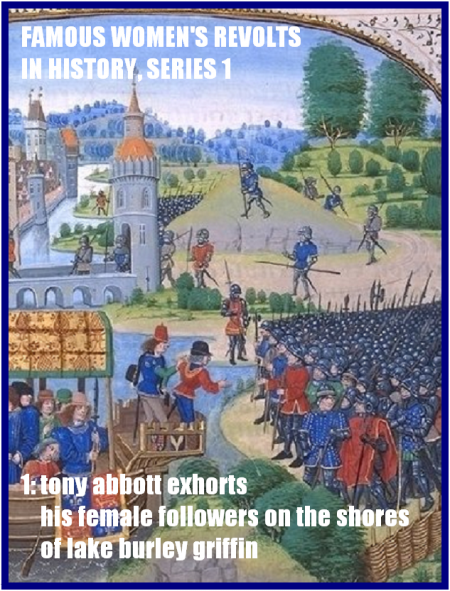 Anyway, I digress. Regardless, did we hear you publicly decry his stance in support of those placards? No, “Margie”, we didn’t. If you privately berated him – we’d like to know – as until such time as you tell us whether you did or not – we can only assume the obvious – that you must have wholeheartedly agreed with and supported his actions, just as Bishop and Mirabella did.

I am sure if he ever does get to be PM – which I very much doubt – he will be sure to bring his extreme rightwing Catholicism down on every woman in this country. And that’s a very frightening thought.

Your husband, along with his bunch of feral shadow ministers and many on his backbench, have turned the political discourse in this country into the obnoxious, wretched, ugliness it is today.

Are you proud of him? I’m sure you are. You must be, because you have now come out and said what a wonderful, loving, decent man he is! To say that — you must agree with everything he says and does! Otherwise you would have the courage to say there are some things you don’t agree with him on.

You just heaped praise on him as if he could do no wrong.

Quite frankly, it disgusts me.

If he were my husband (not that he ever would be — perish the thought!) I would most certainly tell him when he has gone too far. As a woman, I wouldn’t tolerate my man degrading any woman, let alone the Prime Minister. 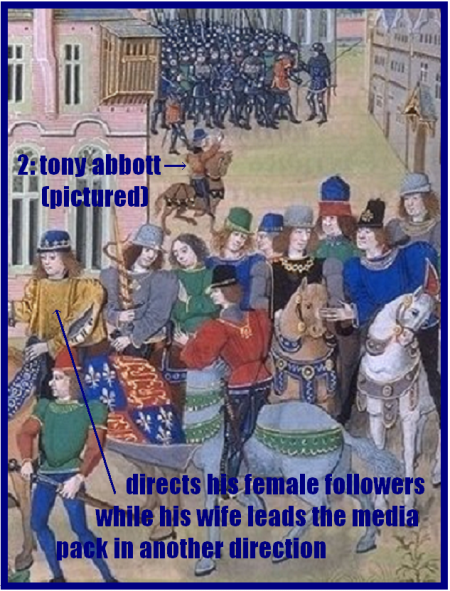 But then, I’m not subservient (not that I’m saying you are) to any man and I will put them in their place if I think they have over stepped the mark with grubby comments. But that’s just me (and no doubt millions of other Australian women).

Obviously, you don’t have that fortitude. If you do, I’d like to hear it.

Your husband thinks nothing of degrading, not only the office of the prime minister but the Prime Minister herself.

He just can’t handle a woman getting the better of him, can he?

His vicious verbal attacks on the PM and physical attacks on women like Barbara Ramjan prove it — he hasn’t changed in all these years no matter how you try to convince us.

He may love you and the girls and his mother – and Peta Credlin – but that’s where his affinity with women ends.

So get over yourself, Margie Abbott.

Your husband is one of the most vicious Opposition leaders in this country’s history — and as he would say:

It’s about time the decent women and men of this nation fought back against your husband’s ugly persona.

So … if you can’t take the heat, get out of the kitchen!

If your husband will let you, that is. 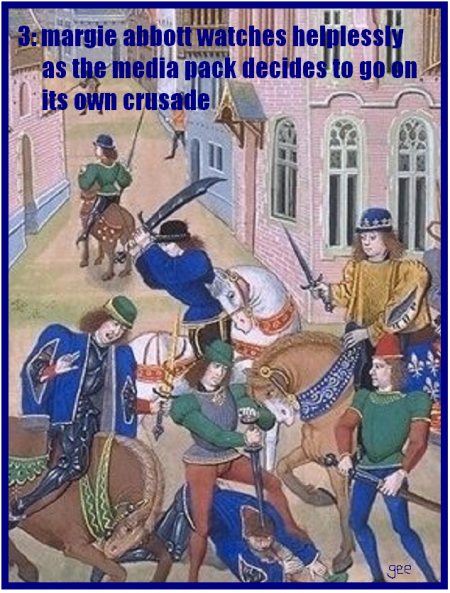