March in March Australia: A national protest against the Abbott Government

What was originally developed as a single protest to be held outside of Parliament House has since become a series of both city and regional marches – 28 in total – all across Australia. March in March organiser Leesa Little explains why this show of unity is so important for Australia.

[We acknowledge the traditional owners and custodians — the first people of this land.]

WHILE IT FEELS LIKE A LIFETIME AGO, the election of the Abbott Government was only as recent as September 2013. Since that time, we have been torn limb-from-limb by a group of ravenous and vicious vultures from the Government and big-business alike, hurriedly feeding on what they're treating as an already discounted carcass full of previously unobtained meat.

What they have yet to realise is that Australia is still alive and breathing — we simply need to find the strength to shoo these buzzards away from what remains of our country. We lift an arm, it is pushed back down to the ground. We lift a leg, it is kicked aside. We dare lift our head and attempt to speak, we are attacked by the right-wing supporters who are waiting in the wings. We need a collective strength — a unity like never before. We need to rise up as a nation, push the greedy scavengers aside and stand again, back on our own two feet.

March in March is that unity; we now have the chance to be heard as one and to unite for a better Australian Government.

Australians from every background ‒ of every age and from near to every socio-economic status ‒ are disgruntled towards the Government for the decisions they are making on our behalf. Those from all political persuasions ‒ including many who voted for the LNP ‒ feel betrayed and dismayed as these decisions come at our very own detriment.

The blatant attitude displayed by the Abbott Government is overwhelmingly condescending — they simply do not believe that Australians are intelligent or aware enough to understand exactly what is going on and why. In a reverse Robin Hood fashion, they've gone to extreme lengths to take from the 'poor' to give to the rich. There has been an obvious shift in order to benefit only big-business, which has been made a reality by making cuts to every possible area of public sector, including health, education and vital welfare benefits. All of this has been done to make the axing of the mining and carbon taxes achievable and to save the wrong people a whole lot of money. 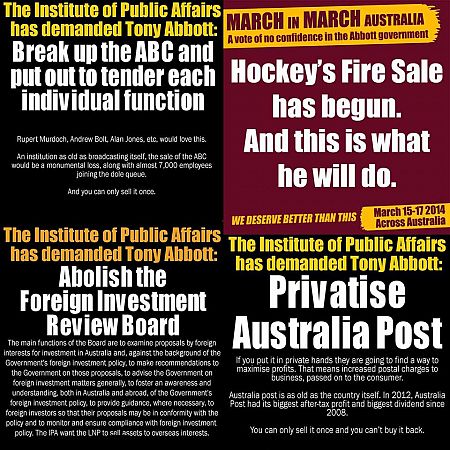 We have stood witness to our precious environment being destroyed right before our eyes and have sobbed at story after story via independent channels about the Government's disregard for basic human rights and treatment of asylum seekers. We all have a voice but it is being stifled by the powers that be. As a loud and united front, we can ensure that we will be heard.

We will be clear and, finally, they will have to acknowledge us.

As early as the beginning of January, it became obvious that Australia needed a collective strength. It was then, through a series of online discussions, that March in March was born. What was originally developed as a single protest to be held outside of Parliament House has since become a series of both city and regional marches – 28 in total – all across Australia.

March in March is conducted under the mutual sentiment of

‘Australians united for a better Government.’

This is a unified call for decency, accountability and transparency from and within the Australian Government.

The result of the disrespectful attitude and heavy-handed approach by the Abbott Government has been that this call has become imperative; we cannot afford to wait silently as our country is systematically torn apart or while our Government continuously disregards human rights.

It has become increasingly obvious that Australians are no longer willing to simply wait until the next election to be heard. As the movement has grown, the number of issues of concern to people has also drastically expanded — in fact, the list of wrong-doings by the Abbott Government increases weekly at the very least.

That is why March in March will not restrict our common goal to a limited list or set of concerns, but instead encourages supporters to march for the issues that they regard as most important to them under our aforementioned mission statement. 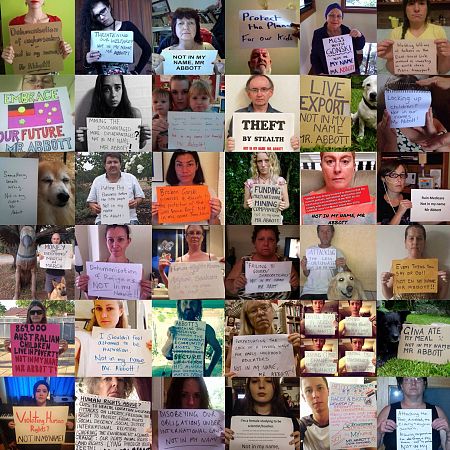 Uniting for a better Government has justly called for around 100 volunteers to unite to pull this together.

Organisation of individual marches has been a mammoth task for all of the volunteers involved, but the public support has been uplifting, spurring each organiser on to greater heights every single day. From all areas of the country, new volunteers made themselves known to the national team and with gentle guidance, a ridiculous amount of hard work and endless passion, they have taken the concept and gone on to create fully-fledged local protests.

On a national level, there is a unique team of individuals from various backgrounds and experience who are working together for the very first time. The national administrators pride themselves as having never been associated with any political party, which enables each one of us to be totally non-partisan. While the accusation has been levelled at March in March that we are a front for a particular party and are being funded as such, the truth is that we are merely volunteers who are desperately seeking real change for our country and its people. Each national administrator is entirely transparent about exactly who we are, as we are a proudly eclectic mix of average Aussies who have come together for this greater cause. 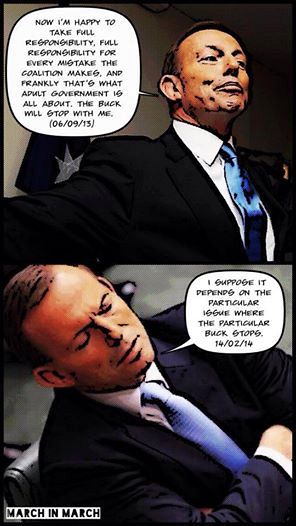 Tim Jones and Craig Batty have been national administrators from the very birth of the concept and have kept this running internally from day one. The rest of the national admin team joined at different stages throughout the growth of March in March and we have each eagerly offered our assistance. Chessy Collins, Margaret McMillan, Candace Wirth and myself, Leesa Little, all handle all things from administrative tasks and writing, down to idea development and publicity. Shaun Minahan is our resident graphic designer and Loz Lawrey is the lead organiser for the national march to be held in Canberra on the 17th. These are, however, loosely defined tasks as every one of us has a hand in the overall planning and execution on a national level.

As a collective of around 100 volunteers and organisers, we’re quite possibly the first protest of this magnitude in Australia that has been propelled via social media alone. It is now time we spread the word to anyone and everyone that we can ‒ the vultures will not have their way ‒ but we need your help. March in March with us on the weekend of the 15th/16th March and, if you can, unite with us at the national march in Canberra on the 17th as well. We’ll be making a statement while Parliament is in session, so while it may be slightly inconvenient to take the Monday off from work, it is much more of an inconvenience to endure this sort of treatment from our own Government any longer.

The purest of campaigns are grown from grassroots and that is exactly what this has been — built from the ground up. Throughout history there has been little room for everyday people to begin such a national movement but that is what will make all the difference. We are marching as one from all walks of life in hopes of giving Australia a voice beyond the ballot-box, therefore participation by any and all peaceful supporters of the cause is welcomed and highly encouraged.

Three days, 28 locations, tens of thousands of Australians — we are marching for a better Australian Government.

Will YOU be there to march with us?

March in March events will be held around Australia on the weekend of the 15th and 16th of March, culminating in a march in Canberra on the 17th.

To find out where the nearest march is in your area, visit the March in March website marchinmarchaustralia.org or Facebook page. You can also follow March in March on Twitter @MarchinMarchAus, as well as Leesa Little herself @Leesa_Little.

March in March Australia: A national protest against the Abbott Government

21 February 2014, 12:00pm What was originally developed as a single protest to be held outside of Parliament ...
Join the conversation
comments powered by Disqus
News updates