After a week of winning, Prime Minister and chief winner, Malcolm Turnbull must be looking forward to next week with barely concealed nervous excitement. Political editor Dr Martin Hirst reviews the Fizza’s record-breaking first week back at work.

FEDERAL PARLIAMENT resumed this week, marking the official start of the political year in Australia. Ah yes, those hardworking MPs and senators. Most of us have been back at work for a month now, but these upstanding public figures need their beauty sleep, or at least to spend more time in bed.

At the end of 2017, Prime Minister Turnbull promised that 2018 would be the “year of rewards” and that all of us would prosper from the trickledown impacts of cutting company taxes.

The only person who seems to have been rewarded so far in 2018 is George “Bookshelves” Brandis who has been promoted to the plum and coveted role of Australia’s official representative at the Court of St James.

Brandis spent $15,000 of tax payers' money on bookshelves, which were too big to fit in a new office he moved into not long afterhttps://t.co/GfmbYOlKaw

Brandis left the Senate on Wednesday after delivering the traditional valedictory speech afforded to retiring members. But Brandis did not follow the script. He appeared to issue a veiled warning to his Coalition colleagues about the rise of creepy rightwing politics – and creepy rightwingers – in the Liberal Party.

Was this Brandis having a dig at his colleague, Unter Führer Peter Dutton? Many commentators seemed to think so. And perhaps it was more than a coincidence that the valedictory coincided with the parachuting of alleged racist and alleged war criminal, General Jim Molan into the Senate. Molan replaced former Nationals deputy, Fiona Nash who fell foul of section 44 last year.

According to credible research, backed up by his own sanitized memoir, Jim Molan was allegedly responsible for a series of potential war crimes, while serving in Iraq and a high-ranking Coalition general. While this is shocking enough, Molan’s entry to the Senate was marred by another scandal, this one much closer to home.

Molan shared the racist Britain First videos infamously circulated by Donald Trump last year. Of course, this potential disaster was turned into an opportunity by the agile and nimble Prime Minister.

Fizza took the opportunity to defend Molan loudly and in his most patrician shouty voice.

According to Turnbull’s logic, Molan can’t possibly be a racist because he once wore a uniform. In other words, being a soldier means you either a) are not a racist ipso facto; or b) your racism can be excused. Fizza had to ignore a whole lot of history of racism in the Australian Army and by Australian soldiers to come up with that fairy tale.

"The Leader of the Opposition wants to describe [Molan] as a racist. That is deplorable. It is disgusting. Jim Molan is a great Australian soldier. We are lucky to have him in the Senate. He doesn't have a racist bone in his body."

Yes, lucky indeed. Molan will no doubt bolster the ranks of the nasty faction around Dutton, Tony Abbott and their troglodyte henchmen (and women, but mostly men). Molan is a good fit with Dutton and co. As a leading exponent of “Sovereign Borders” he has experience in not being a racist, but…

In his own mind and words, Jim Molan is a champion of multiculturalism — a set of skills he learned well in the battlefields of Iraq where he led an equal opportunity policy of slaughtering men, women and children, regardless of race or religion. Too bad most of them were unarmed civilians and probably Muslims.

From the Sydney Morning Herald, 8 February 2018:

Asked if he apologised for his actions, Senator Molan said: "No I don't. No, because I didn't know it was an appalling organisation a year ago.

"Anyone who thinks I am anti-Islamic or racist, as the allegations were made yesterday in The Sydney Morning Herald, is stark-raving mad. I have worked effectively cross culturally for years," the former military major general said, referring to his role on missions in Muslim nations such as Iraq.

Senator Molan also denied he had shared articles about banning Muslim migration to Australia. However, his Facebook page still shows he shared two news articles about the issue in September 2016.

Jungle Jim is just another example of Australia’s seemingly willing and blind slide into open Trumpism in our politics. Malcolm Turnbull is also willing to let this happen on his watch.

We also learned this week that the Turnbull Government has learned nothing from Australia’s disastrous military adventurism in Iraq and Afghanistan on behalf of our American cousins. It’s a pity General Molan can’t share some of his no doubt deep expertise on the issue.

The Jobs and Growth government – which is presiding over one of the worst declines in real wages in a generation – has decided to propel Australia into the already crowded global weapons industry.

Yep, manufacturing armaments – you know, ordnance that kills people – is to be the new highway to economic nirvana and a bright new future for Australian industry. It’s a joke, but the punchline is you get blown to bits.

Yep, Malcolm is winning and winning this week. However, perhaps his greatest victory – the sweetest victor of all – was his sterling and spirited defence of embattled Deputy PM Barnaby #BeetRooter Joyce.

The week began well for Bananaby, the Daily Telegraph splashed his happy baby news on the front page. Oh how delierously delighted the nation was at that point. A true champion of family values had finally been blessed with a family.

Oh what? Really? He already had a family and the babymama was a former staff member, and she was married and….

Well, that quickly turned into a shit sandwich for everyone concerned.

And, of course, it is under these arduous and adverse conditions that Malcolm truly knows how to win. He gallantly dived in and took a great big bite of the sandwich, declaring through gritted teeth, and with an unpleasant look on his face, that Barnaby would make a good father and at least he hadn’t left his babymama to bring up the love child on her own.

He added that he really didn’t want to talk about it:

I’m very conscious of the distress this causes to others, in particular Natalie Joyce and her and Barnaby’s daughters, so he it is a private matter, a tough matter, and I don’t have any more to say about it.

Lucy and I are very conscious of the hurt occasioned to Natalie and their daughters in and particular. So that’s why I don’t want to add to the discussion about it.

And, no wonder Fizza didn’t really want to talk about the BeetRooter’s baby. It seems that – despite self-serving media bleating about no real public interest in the matter – there may be more to come about the Deputy PM’s trysting with a former staff member.

A lot of people have been asking why the Daily Telegraph would publish this story now. And it’s a good question. I think I have at least part of the answer.

As regular readers of Independent Australia would know, the rumours about Bananaby’s extramarital nookie have been around for a while. We covered the story back in November last year, but back then the mainstream ignored it.

The real target of the NewsCorpse machete attack on Joyce was not the Deputy PM. He and his family are just collateral damage.

The real target is Turnbull himself.

Now it has been revealed that Turnbull’s office – and therefore the PM himself – helped move Mr Joyce’s girlfriend into a well-paying job in Matt Canavan’s office, he is firmly in the firing line.

Well, there we go.
Your taxes at work. https://t.co/ZtD5o1BrFB

Both Joyce and Turnbull will be under increasing pressure to either come clean about this – which could lead to one or both of them resigning – or they will have to double down and keep trying to put out a raging dumpster fire with methylated spirits.

I don’t put it past either of them to make a last-ditch effort to cling on to their jobs. After all, we now know for sure that it cost Fizza $1.75 million to buy his bed in the Lodge and the BeetRooter has paid the ultimate prize for his position — he’s earned the probably permanent hatred of a woman scorned, times by five.

My gut feeling is that NewsCorpse support for Peter Dutton is behind the stories coming out now. Somebody is certainly drip feeding the Daily Telegraph with juicy updates on the affair, the money trail and the inside goss on who knew what and when. Dutton is certainly the front-running challenger to replace Turnbull and the Libspill rumours just won’t go away.

We know from the Joyce story that if the rumours are swirling then there’s something lurking just below the surface.

It might be only the start of politics for 2018, but I’m willing to bet that Turnbull won’t be prime minister at the end of the year.

He won’t be beaten in an election, because the Coalition will want to cling on to the bitter end. Fizza will be replaced — sooner rather than later.

Dutton will become Prime Minister and the "Butcher of Fallujah" will get a cabinet post.

Here’s a bit of advice. If you get into trouble and Malcolm Turnbull offers to come to your defence, best you politely decline. He doesn’t have a good track record. 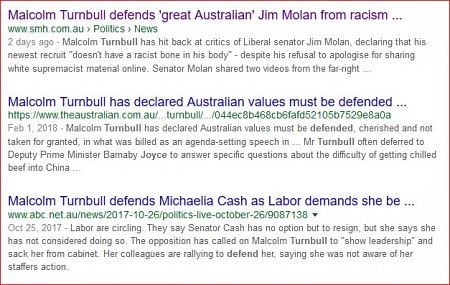 PS: I haven’t had the space to mention the Banking Royal Commission, which starts next week, but it doesn’t take a stable genius to know that, unless there is some dramatic whistleblowing, it will be a whitewash.

Also, and finally, the Closing the Gap report this week underlines just how good Turnbull is at winning. The gap in health, education, opportunity, wealth, life expectancy and incarceration rates between white Australia and Indigenous Australians is getting bigger. That is a win of Trumpian proportions.