In Australian recessions, recent immigrants and temporary visa holders tend to be amongst the first to be laid off.

All other long-term temporary entrants and possibly also provisional visa holders who cannot get a job, likely to number well in excess of a million people, will have to either depart if they can afford to or become destitute.

The global economy is shutting down because of the coronavirus.

So what will it take to recover? #AJStartHere explains. pic.twitter.com/fs3G34idCh

If only 30 per cent of long-term temporary entrants depart, net migration in 2020 would be even lower than during the Great Depression when it fell to negative 12,117 in 1931.

Not even during the Great Depression did Australia experience negative population growth.

Chart 1 shows that during the Great Depression, the fall in net migration was very closely correlated with the rise in unemployment which peaked at near 20% in 1931: 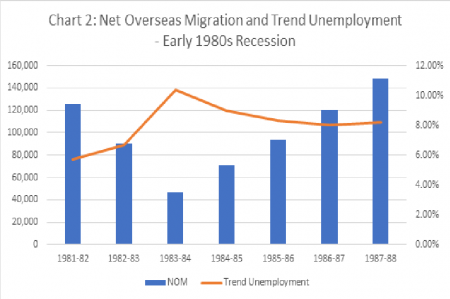 By contrast, after the Global Financial Crisis (GFC) unemployment in Australia increased from 4.2% in June 2008 to only 5.8% in June 2009 before beginning to decline.

JobKeeper Payment a gun to the heads of over one million temporary entrants https://t.co/lnDgWeGfsf @IndependentAus

The other extraordinary feature of Australia’s economic performance after the GFC was that, unlike most other developed nations, Australia did not experience an actual recession (two-quarters of negative GDP growth).

Unemployment increased by only 1.6 percentage points from top to bottom with a net migration decline of only 45.5% compared to:

Another significant feature of Australia’s economic performance after the GFC was that actual hours worked per month per adult aged 15+ fell from 108.1 prior to the GFC to only 103.6 before recovering.

So what can we expect in terms of the depth of the coronavirus recession and the speed of recovery?

Three issues to consider are:

Firstly, the length and depth of the recession, and in particular the extent to which unemployment rises and average hours worked per month per adult falls, will depend not just on the length of time it takes before we overcome the virus but also on the effectiveness of the Government’s support measures to keep the maximum number of people connected to their employers.

Secondly, if net migration does move significantly into negative territory, history tells us that correlates with much higher levels of unemployment, as well as larger numbers of people who become destitute. Thus a policy to force net migration down faster will make recovery all the more difficult.

Finally, the developed world will need to emerge from the coronavirus recession at a time its population is ageing rapidly (see Chart 5).

The working-age to population ratio of the developed world (including China) peaked soon after the GFC. This ratio has declined significantly since that time and will steadily decline much further.

Population ageing since the GFC has contributed to slowing global economic growth and to Australia’s slow growth of the last decade.

This is highlighted in the steady decline in the average hours worked per month per adult in Chart 4.

Research on population ageing confirms everything Peter Costello told us in his first two Intergenerational Reports about its impact on economic growth.

Population ageing in the developed world and in Australia will add to the challenge the Government faces in designing its recovery from the coronavirus recession.

The key will be to stop the curve in Chart 4 from falling too sharply.

Recovery from that decline can be assisted if the Government does not insist on forcing Australia to experience negative net migration and possibly negative population growth, combined with a massive increase in the number of destitute people in Australia.

The Ruby Princess: How could this have happened? https://t.co/eeyaNyDuAH @IndependentAus