What conditions are necessary to discriminate a married couple from other couples? Matthew Mitchell discusses a question society is grappling with right now. 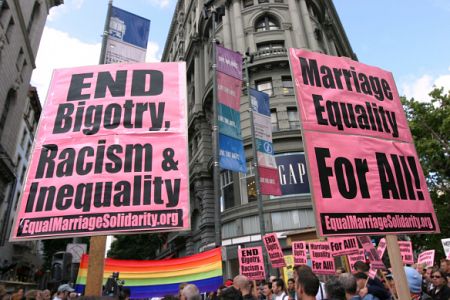 There has been discussion around the world in relation to the topic of marriage and what it means, particularly in relation to same-sex marriages. Two aspects of this conversation tend to hinge on the cultural and legal significance of marriage.  This essay aims to explore some of the understandings of marriage and the cases put forward from various perspectives.

Two basic aspects of the case for same-sex marriage are reflected in the following extracts from the website of Australian Marriage Equality. First from a legal perspective:


'In recent years, most state and territory governments, have extended to same sex couples many, though not all, of the legal and economic rights and responsibilities available to opposite sex couples. Yet we remain excluded from the institution of marriage itself, a distinction that undermines our human dignity, diminishes our families and discriminates against us in violation of our basic right to equal legal treatment.'

An analysis of these arguments may reveal some weaknesses.

Specifically, the 'lack of an inferential claim' in the first paragraph. Here, it is not clear that exclusion from marriage diminishes families or undermines human dignities (this may be true, but the argument and evidence is not provided).

Also, there appears to be an inconsistency in that the first paragraph seems to be suggesting that legal and economic rights are possible for same-sex couples without marriage, but then the last line conflates these rights with the institution of marriage itself. Without this evidence the statement about discrimination is void of significance.

Of course marriage discriminates ― that is what gives it its meaning; it has conditions which must be met before it can be entered into. These conditions typically include the agreement to commit to each other in a monogamous relationship. What society is now engaged in is a debate on what basis the discrimination should apply, not whether or not it discriminates. Thus, the key phrase here is “in violation of our basic legal right to equal treatment”. Whether or not there is such a legal right in relation to marriage is a question I do not attempt to answer here.

The second paragraph begins by arguing that religious institutions will not be harmed by same-sex marriage in any way.  'Any way' is a strong claim, it means 'not at all'. The remainder of that paragraph is not sufficient to support this statement, as it explains only one way in which religions may be unaffected.  In fact, is likely that any religion that does not accept same-sex marriage will be affected in important and profound ways.  Not least in regard to how it deals with members who proceed to engage in same-sex marriage and the conflicts that may arise between members of that religion and friends and family who support or participate in same-sex marriages.  Consider the position of a friend whose religion does not support same-sex marriage when asked to respond to the invitation to your same-sex wedding.

In any case, the above is a criticism of just this one argument, and not the case in general. However, I would suggest that the basic form of the argument given above by Australian Marriage Equality is not unusual.  The discrimination issue is raised again by Rodney Croome in his article on the ABC's The Drum. However, Rodney adds to this a concern about the meaning of the different unions with the statement 'no-one writes love songs about civil unions'.

To Westerners, love is seen as a key to entering into marriage, but -this is not the case in all cultures, arranged marriages are common in India, and with multi-culturalism, across the world - including Australia.  Nevertheless, Australian Marriage Equality makes a similar claim to Rodney's:


'For many Australians, marriage uniquely conveys the nature and legitimacy of a committed romantic relationship. Gays and lesbians should not be denied this form of expression.'

The argument appears to be that marriage is necessary for deep and committed forms of love (the motto on Australian Marriage Equality's website is:  'Marriage is about love and commitment, not your partner's gender'). However, there are deep and committed forms of love endemic in our society without the institution of marriage. For example, the love of a parent to a child (and vice-versa), the love between brothers and sisters, and taking the example of Plato, the love between men who have no other relationship than an intimate and close friendship.  The ancient Greek attitude to such a same-sex relationship is described in Plato's Republic as a pure, and apparently high, form of love.  Here is an extract of the conversation between Glaucon and Socrates from The Republic (Plato pp 164 – 165):


"And what is very beautiful will also be very attractive will it not?"

"It is then, with people of this sort that the educated man will fall in love; where the harmony is imperfect he will not be attracted."

"Not if the defect is one of character," he replied; "if it's a physical defect, he will not let it be a bar to his affection."

"I know," I said; "you've got, or once had, a boy friend like that. And I agree with you. But tell me: does excessive pleasure go with self-control and moderation?"

"Certainly not; excessive pleasure breaks down one's control just as much as excessive pain."

"Does it go with other kinds of goodness?"

"Then does it go with violence and indiscipline?"

"And is there any greater or keener pleasure than that of sex?"

"No: nor any more frenzied."

"But to love rightly is to love what is orderly and beautiful in an educated and disciplined way."

"Then can true love have any contact with frenzy or excess of any kind?"

"It can therefore have no contact with this sexual pleasure and lovers whose mutual love is true must neither of them indulge in it."

"They certainly must not, Socrates," he replied emphatically.

"And so I suppose that you will lay down laws in the state we are founding which will allow a lover to associate with his boyfriend and kiss him and touch him, if he permits it, as a father does his son, if his motives are good; but require that his association with anyone he's fond of must never give rise to suspicion of anything beyond this, otherwise he will be thought a man of no taste or education."

"That is how I should legislate."

"And that, I think" said I, "concludes what we have to say about this stage of education, and a very appropriate conclusion too – for the object of education is to teach us to love what is beautiful."

The famous author C.S Lewis (very publicly a Christian) says the following in relation to the argument on the role of love in marriage:


“The idea that 'being in love' is the only reason for remaining married really leaves no room for marriage as a contract or promise at all. If love is the whole thing, then the promise can add nothing; and if it adds nothing, then it should not be made." (Lewis, 1952, pg107)

Lewis (1952) does go on to recognise that those who are in love (in a romantic sense) have a natural inclination to bind themselves by promises, but by this he is identifying that marriage is not dependent upon love, although the two often coincide. In the Christian concept of marriage, which  Lewis is describing, marriage ideally continues even if the partners stop loving each other.

Whether this is, or should be true, for marriages outside the Christian church is a question that requires a careful consideration of what marriage really is and means. If it is not about love, and love, as pointed out by Plato, can exist without marriage; then what is marriage? And why would one enter into it? What conditions are necessary to discriminate a married couple from other couples? This seems to be the question society is grappling with right now. It is one that must be made collectively, with the knowledge that such a democratic approach to marriage can only apply to manmade laws, as the notion of democratic religious laws is preposterous.