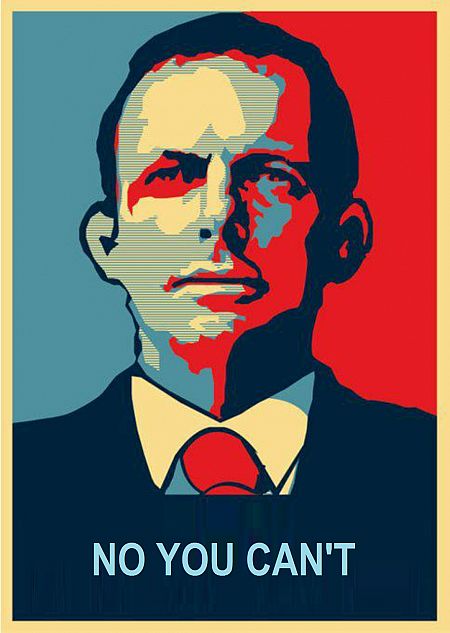 “We have no choice,” a prominent Coalition powerbroker told journalists in a private backgrounder. “We must act now. Going to an election with Tony would be suicide.”

Newspoll today shows Abbott’s personal approval still only 39 per cent, despite having risen 11 points since December.

This continues the run of negative poll results since Abbott narrowly beat Malcolm Turnbull for the Liberal Party leadership in 2009. That vote was 42 - 41.

Turnbull’s approval remains above 60 per cent.

“Tony’s numbers are disastrous,” a senior Liberal Party strategist admitted. “Never been above 40 per cent. And that’s with all the media constantly pumping him and bagging Julia.”

The strategist concedes that on current polling the Government would win the September election if Abbott remains Opposition leader. “Keating won in 1993 from a worse position than Gillard’s now,” he said. “And the little lying rodent won in 2001 from even further behind.”

“Abbo is a nice bloke,” said a Coalition frontbencher who declined to be named. “He got Fairfax in lockstep with Murdoch by promising whatever media laws they want. And the ABC is giving us an incredible run. God knows what he promised them. So kudos to Abbo for that. But we can’t expect the media to conceal the fact forever — the guy has no policy clue.

“Sooner or later, someone’s going to read his book,” the frontbencher said. “Talk about falsehoods and fantasy! I don’t know who wrote it. But he didn’t get a fact right.”

“If Laurie Oakes or Paul Syvret found it, they’d rip it to shreds. We’ve begged him to take it off the website.”

A source close to the Shadow Treasurer agrees. “If you think Joe Hockey is an economics moron (don’t quote me on that, will you?) just look at what Abbott says. I mean, everything about tax is wrong, everything on growth and productivity is wrong. It’s like he’s never read a briefing paper in his life.”

“Eventually someone’s going to notice the economy,” the source said. “We can only lie about that for so long. Reality will dawn — Australia’s books are the best in the world. By a street. The media all keep trying to credit Costello. But the punters won’t buy that forever.”

A National Party shadow minister in a marginal country seat confirmed the move is on. “Gotta face it,” he said. “We can’t win with Tony. He’s not just a policy buffoon but a compulsive liar. Switch now and we have a chance.”

The frontbencher said the continual falsehoods were a central problem to conservative rural voters. “Like when he denied meeting George Pell. Stone the crows! And denying he organised the anti-Pauline Hanson slush fund. Geez, that’s going to bite us on the bum. His crazy claim he won’t do deals to gain office. Strewth! His lies about the carbon tax. His insane idea that China’s CO2 emissions would increase 500 per cent. His stupid porkies about why he didn’t visit the troops in Afghanistan with Julia. The ridiculous claim that BHP deferred Olympic Dam due to taxes. His absurd insult to all our allies that ‘the rest of the world was not going anywhere near emission trading schemes.’ Calling asylum seekers ‘illegals’. And his lies about Government spending. Fair dinkum! They just keep on coming.”

“Tony’s a good mate,” the shadow minister said. “Just no integrity. This is all off the record, by the way.”

According to another Coalition insider, the move could come as early as next week. “We are just waiting for Tony to go overseas. Like the Country Libs in the Northern Territory.”

Asked if he believed the switch to Malcolm Turnbull would be a positive, the insider said, “Anyone but Abbott. But you didn’t hear it from me.

“Look, we gave him a go. Got in front in the polls for a while. But let’s face it. There’s only one reason for that — the media continually concocting stories about the Gillard Government with fabricated quotes attributed to anonymous sources.”