It has been a bad month for Australia’s defence minister and the armed forces he is charged with directing. Alan Austin reports.

FEBRUARY HAS DELIVERED several reminders of an insidious force at work in Australia’s political life — Coalition governments and military chiefs conspiring to lie and deceive.

Monday this week was the 50th anniversary of the tragic loss of 82 sailors when two Australian warships – the destroyer HMAS Voyager and the aircraft carrier HMAS Melbourne – collided during naval exercises. Thus began the longest and costliest military exercise in denial of the truth and obstruction of justice in Australia’s history.

After an ineffectual internal inquiry, the then Menzies Coalition Government convened an expensive royal commission. When sworn testimony from many officers was later discredited, the findings of that first commission were set aside and a second, even more expensive, one initiated.

Determining the truth and ensuring justice for the victims was a long and tortuous process, frequently obstructed by conservative governments and the military.

This followed the ABC broadcasting allegations by asylum seekers that naval personnel had caused injuries to their hands and eyes.

“... extremely angry and have required some period of time to cool off.”

Another explanation, of course, could be humiliation at finding himself having to shield sailors involved in “defence” against destitute refugees. Johnston in Opposition had assured an assembly of arms suppliers in July that to

“... inject defence into this border protection … would be the wrong thing to do.”

Indeed, it is. But having to defend the sailors, Johnston did so with high dudgeon:

“The good men and women of the Royal Australia navy have been maliciously maligned by the ABC … I am absolutely sick to the stomach that this Australian iconic news agency would attack the navy in the way that it has.”

Unfortunately for the minister, the journalists found his fulmination foolish.

One asked about a confirmatory Fairfax report with eye-witness accounts of some misbehaviours. So why not investigate?

“I have discussed this matter with senior command. And they assure me … that there is no substance to these allegations.”

Well, that settles it.

The interview then descended into farce, despite the minister’s grimness.

“Minister, how about this one? There have twice been allegations that the navy turned off its lights when it was in Indonesian waters allegedly to avoid detection. Can you shed any light on that?”

“Oh, why would you view the glass half empty at every turn of every corner. Please. Please.”

Well, the problem for the minister – and for most ministers for defence since Bob Menzies’ day – is that senior officers almost always automatically deny allegations of wrongdoing — which almost all are later validated.

This followed a denial of any such possibility just two days earlier.

The chief of military operations against refugees Angus Campbell then explained:

“I should stress that this occurred unintentionally and without knowledge or sanction by the Australian government.”

“... a lie so readily refuted by commonsense logic and seamanship as to be grossly insulting to Indonesia.”

Then on Wednesday this week, Attorney-General George Brandis continued the Abbott Government’s attacks on perceived security threats with no regard for the truth.

“... man who, through his criminal dishonesty and his treachery to his country, has put lives, including Australian lives, at risk.”

Really? Evidence for those claims?

According to Crikey, Snowden has not been charged with treason anywhere:

“Brandis failed to produce evidence to support the allegation, with the Attorney-General’s office failing to answer Crikey’s repeated requests for further detail.”

This month’s most astonishing reminder of a Liberal defence minister blatantly lying, however, was ex-minister Peter Reith on Tuesday in the Sydney Morning Herald:

“I believed the [2001] children overboard story to be true at the time, although it was later found to be untrue by a Senate Select Committee."

Why on earth did Reith raise this again?

In Australia’s recent history, this must be the set of deliberate lies most destructive of the nation’s moral character.

The falsehoods by Reith and others, including PM John Howard, vilified innocent people – among the poorest and most vulnerable families on the planet – and manipulated public sentiment in a racist direction for political gain.

Fortunately Reith was promptly slapped down by David Marr at The Guardian.

So is this a Liberal Party phenomenon — or do all defence ministers lie and cheat in concert with military chiefs?

The Rudd/Gillard period provided one answer to that, when several damaging allegations emerged. These included claims of assaults and bastardisation of recruits, sexual misconduct at the Australian Defence Force Academy (ADFA) in Canberra and drug-trafficking in Sydney.

Then Defence Minister Stephen Smith refused to offer a knee-jerk denial of wrongdoing and was immediately roundly criticised.

He went further in April 2011, when he condemned the way the military was dealing with the victim of the Skype sex broadcast at ADFA.

Smith described it as

“... somewhere between being completely insensitive and completely stupid.”

The executive director of the Australian Defence Association, Neil James, was furious at Smith's failure automatically to defend the ADFA commandant:

“Surely he could have dismissed such factually ignorant questioning by noting that there was no evidence to suggest that anyone in the ADF chain of command had acted inappropriately.”

As soon became clear, there was plenty of evidence of widespread serious failures at the ADFA.

There are ongoing embarrassments over getting helicopters to fly and submarines to sink. Last month the navy began an investigation into defence personnel operating an online anti-Muslim forum. And just last week, a young woman entered the fortified Richmond RAAF base and held up the bank.

For the defence forces to regain the respect of the community and Australia’s allies a strategic manoeuvre would be to retreat immediately from conniving with the Abbott Government in lies and deception. 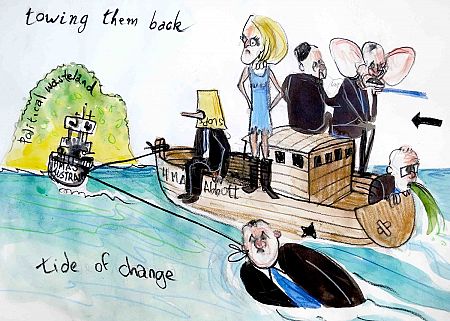