Leyonhjelm on 18C: Never been a better time for two white men to duke it out

There’s never been a better time to watch two white men duke it out in the racial discrimination ring as Leyonhjelm tests 18C against Fairfax's Mark Kenny. Bring on the popcorn, says Jennifer Wilson.

OH, THAT David Leyonhjelm! What a scamp he is!

As you probably know, he’s making a complaint to the Human Rights Commission under Section 18C of the Racial Discrimination Act, after Fairfax journalist Mark Kenny called him an “angry white man".

I don’t think Leyonhjelm, a staunch opponent of 18C, is being hypocritical: he’s perfectly open about this being an opportunity to “test” the law, rather than a genuine case of offence inflicted or taken.

And it will be most interesting to watch the arguments for and against unfold. Will Kenny’s comment fall into one of the many exemptions provided by 18D? Did Kenny intend to racially insult Leyonhjelm, or was he making a contextual point by mentioning the man’s colour? How can Leyonhjelm make a complaint at all, ethically speaking, if he’s not insulted or offended?

I remain astounded that white people continue to fight for the right to offend and insult people of colour. I understand that these white people believe they are fighting for free speech and of course they are, if you are of the belief that free speech equals unrestrained speech.

It’s inarguable that Section 18C curbs free speech. Of course it does. So do the laws that make it an offence to use foul language in public places, or to call police officers cunts when they’re attempting to restrain you or move you on. Why isn’t anybody complaining about these restrictions on free speech?

Insult and offence are subjective concepts, as Leyonhjelm repeatedly points out. However, Section 18C specifies that the insult and offence must relate to race, ethnicity and religion before it is considered insulting and offensive.

Its ambit doesn’t cover insults such as you’re an arsehat dickwad, and offensive statements such as all your family are loser thieving pisspots and always will be so fuck off you sad cunt. 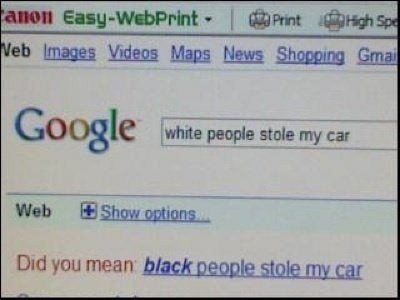 I’m still struggling to come up with a pejorative comment about someone’s race, religion and/or ethnicity that isn’t offensive or insulting. Can anyone help me? Please use asterisks.

There’s never been a better time to watch two white men duke it out in the racial discrimination ring. Popcorn.

Leyonhjelm's hypocrisy on #18C. Threatened to sue 4 defamation when I Tweeted Cash for Candidacy article in Fairfax https://t.co/Z04hGQbgfs