Labor's path must pass on Murdoch

The price of wool was falling in 1891.
The men who owned the acres saw something must be done.
“We’ll break the shearer’s union and show we’re masters still.
And they’ll take the terms we give them, or we’ll find the men who will.

From Clermont to Barcaldine the shearer’s camps were full.
When through the west by thunder rang out the union’s call.
“The sheds’ll be shore by union or they won’t be shorn at all.”

O Billy Lane was with them, his words were like a flame.
The flag of blue above them, it spoke Eureka’s name.
“Tomorrow,” said the squatters, “they may not be so keen.”

“We can mount three thousand horsemen to show them what we mean.
We’ll pack the west with troopers from Burke to Charters Towers,
You can have your fill of speeches but the final strength is ours.”

To the trial at Rockhampton fourteen men were brought.
“We’ll find a law,” the squatters said, “that’s made for times like these.”
The judge had got his orders. The squatters owned the court.
When they gaol a man for striking, it’s a rich man’s country yet.

~ From The Ballad of 1891, by Helen Palmer and Doreen Jacobs.

A NEILSEN POLL taken half-way through May revealed a sharp drop in Tony Abbott’s approval rating: a two-party preferred result that followed the LNP’s horror budget with Labor showing 56 and a sudden drop to 44 for the government.  Newspoll shows similar numbers and this week's Morgan Poll was even worse for the Government.

Great news for the Opposition, but it doesn’t herald an early election. When there is one, will Labor be ready? In politics things can change very quickly.

Media commentators constantly have to find new things to say and one writer has suggested that Opposition Leader Bill Shorten needs to reform his party to lift its rating.

Lots of people have tried to reform political parties.

One who did was Gough Whitlam, back in the 1970s. First he had to see out dear old Arthur Augustus Calwell, a man with the rasping voice of a bull calf looking for its mother, but still capable of almost defeating the hated RG Menzies in 1961. In Opposition, Calwell made Whitlam his deputy. “The faceless men” of the ALP ultimately did replace Arthur.

'Faceless men', by the way, was a phrase used by Whitlam in his clash with Calwell and frequently used by the Coalition and News Corp press to berate Labor. The “faceless men” refers to the party’s National Executive, which can influence leadership changes, but does not always have the final say.

Photographs from the Daily Telegraph, 1963. (Images via brucehawker.com)

Arthur Calwell was a lunchtime regular at a restaurant in Melbourne just across the road from the old Truth building, where I was working at the time. I often enjoyed lunch and a beer with him. He was an amusing companion with a great sense of humour.

One day, he saw Keith Murdoch, Rupert’s father, entering King’s Hall at the old Parliament House and screeched at the top of his bellowing high-pitched voice:

“There’s that bastard Murdoch, don’t let him in.”

Arthur was traditional Labor, born just five years after the great Shearers' Strike that birthed the Labor Party. It was Whitlam who brought Labor back to power, with the help of Rupert Murdoch, who in one of the great twists of political change, then brought Whitlam and Labor down by the simple means of bullying a drunken governor-general and ensured the appointment of the Malcolm Fraser Liberal-Country Party coalition.

Bill Shorten’s task today is no less than Whitlam’s, but today’s Australia has also changed. Politics has entered a completely new era.

Kevin Rudd’s Labor was of his own creation. But Kevin was a control freak in a situation where it wasn’t physically possible, nor even desirable to do so. Whitlam simply appointed his ministers and left them to get on with their work, sometimes with dire results. Whitlam lost Murdoch’s support simply because he was not taking Rupert’s phone calls, nor inviting him for lunch nor wanting his advice or accepting Rupert’s other invitations.

Labor must give up all connections with Rupert Murdoch.

Hawke and Keating made a tragic mistake in their "princes of print" decision, and paid a heavy price giving him the power he has used in every subsequent election to bring Labor down. There is no freedom of the press when one proprietor owns a majority of the papers in a country, and even less of any kind of freedom when the same individual owns a majority of leading book publishers and a majority of television services.

The limit of any advice I would offer to Bill Shorten would be to not cosy to Murdoch. The power of the Murdoch press is failing in Australia and it must fail if we are to maintain a strong and rich country.

There are plenty of people around who want to tell Bill Shorten what to do. One recent headline offered him advice on how to develop a Labor policy program and reform the party. That advice is almost facetious. To reform the party now is neither necessary or desirable. The Labor Party does not need reform, in my view. Certainly it needs more members and a greater balance of non-union members. And the party needs Anthony Albanese, the favourite of the public, to take on more of a leading role in the party’s day to day activities.

Labor came out of the last election with a generally popular set of admirable and totally workable policies ready to be installed. Tony Abbott thought so highly of them that he promised not to change anything. Everybody knows now what he did after the election, astoundingly under the influence of Joe Hockey — whose views, anyway, are simply based on the discredited and outmoded economic theories of a past age.

The world has changed dramatically. We have seen many countries sink into serious poverty as a result of the concentration of enormous wealth in a few powerful hands. Do we need to be reminded again that it was the Labor Party under Kevin Rudd who was, for all his personal faults and his obsessive over-management, intelligent enough to recognise the emergence of a global disaster and save Australia from the worst effects of avarice and mismanagement carried out within some of the world’s most powerful banks.

A writer in the Saturday Paper has offered the view that Labor was challenged intellectually. Sorry sir, but Labor is far ahead of the coalition already in intellectual brainpower. That was on show in the Opposition benches between 2007 and 2013. Could anybody see anything resembling even slightly intellectual in the performances before and after the election of any on the front bench of the LNP?

This time, the Australian public is more alert. Their anger at Labor is dissipating rapidly. Labor has heard the cries from what the Murdoch papers called “Struggle Street”.

Labor's last term was destroyed by the results of its own internal machinations. Now it can show that those days are over and the team spirit in the party will overcome the inevitable few who allow their personal ego to unbalance the party. This is what Bill Shorten and the reliable and steady hands of Anthony Albanese need to do.

In the meantime, the Coalition will carry on in its chaotic way. No double dissolution, please. In 2016, we will surely have a return to sanity. Australians will have been robbed of three years of urgently needed progress by a Coalition Government prepared to engage in doubling-dealing duplicity. The country is not going broke, but it may well do so if we do not heed the message of Naom Chomsky.

At the age of 85, Avram Noam Chomsky is an American linguist, philosopher, cognitive scientist, logician, political commentator and activist. He is professor emeritus at the Massachusetts Institute of Technology.

He is also a severe critic of American foreign policies and of the mainstream news media. He has proudly admitted to being a political activist, a revolutionary and a libertarian socialist.

Many years ago I read one of his books and mentioned part of it to Rupert Murdoch, who doesn’t read books even though he intends to become the world’s biggest book publisher.

In the last few weeks, Noam Chomsky became a favourite topic in Australia with his YouTube video, which is all about how to wreck a nation’s economy:

It has attracted a huge number of hits in Australia via Twitter, for the obvious reason that the Australian Government under the leadership of Tony Abbott and Joe Hockey is engaging in exactly the form of economic vandalism that Chomsky has derided. 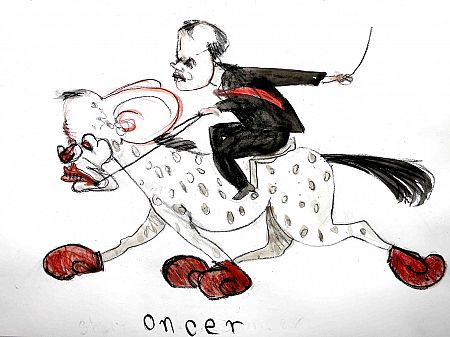