The historic election of Jeremy Corbyn as British Labour Party leader is part of a new kind of politics rising throughout Europe to challenge the establishment and the status quo. Lauren McCauley reports for Common Dreams. 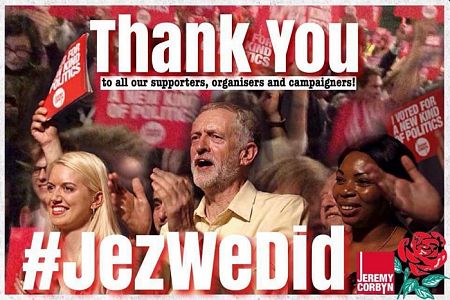 IN WHAT HAS BEEN CALLED a resounding "victory for the people", anti-war, anti-austerity socialist Jeremy Corbyn on Friday was elected leader of the British Labour party.

Taking 59.5% of first-preference votes, the long-shot win is seen as a clear renunciation of the policies currently dominating UK and European politics. According to reports, Corbyn sailed past rivals Andy Burnham, who trailed with 19%; Yvette Cooper, who won 17%; and Liz Kendall, the "Blairite" candidate, came in last with 4.5%.

Supporters say the triumph marks a sea-change within the established order.

'British politics will never be the same', said Salman Shaheen of Britain's progressive Left Unity party in a statement.

'... shatters the main parties’ consensus on austerity, war and many other issues. This victory is part of a new kind of politics that is rising across Europe, as people reclaim hope and mass movements grow for real alternatives.'

In a speech following the win, Corbyn thanked those who, catalysed by his candidacy, flocked to the Labour party. The number of people who paid £3 to take part in the vote nearly tripled the party's size, as it grew to roughly 550,000 people.

Speaking to his supporters, Corbyn vowed to return the party to its founding principles of "justice" and "democracy" and work to better the whole of the country.

His policies include increased public spending and nuclear disarmament. During his speech, Corbyn called for Prime Minister David Cameron to show more "compassion" in dealing with the Syrian refugee crisis, adding that he would attend a demonstration planned in London later on Saturday.

His victory, he said, confirms to everyone

"... that the objectives of our party are intact, our passion is intact, our demand for humanity is intact, and we as a party are going to reach out to everyone in this country to take us on that journey together so no one is left on the side, everyone has a decent chance in life and a decent place in society."

"Thank you in advance to us all working together to achieve great victories," not just electorally, he added, but

During his campaign, the north London MP promised that, under his leadership, the Labour party would apologise

"...to the British people for taking them into the Iraq war on the basis of deception and to the Iraqi people for the suffering we have helped cause."

Jeremy's article " Above all, it has shown that millions of people want a real alternative, not business as usual" http://t.co/8XJW7zzdad

Greece's leftist Syriza party issued a statement congratulating Corbyn, saying his leadership will significantly strengthen the 'pan-European front against austerity', adding that the win 'sends a message of hope to the people of Europe'.

On Monday, Corbyn is expected to join former Greek finance minister Yanis Varoufakis at an event in London to discuss 'alternative[s] to austerity, humanitarian disaster and market meltdown.'

This story was originally published in Common Dreams on 12/9/15 under the title 'Challenging War and Austerity, Corbyn Sails to Victory in UK' and has been republished under a Creative Commons licence.

People are sharing images of what Corbyn and Cameron were up to in the 80s http://t.co/mC0h0Ya89v pic.twitter.com/l5sONdhmjF

Challenge the status quo. Subscribe to IA for just $5.