With all of the talk of rorting lately, Peter Wicks takes a look at the hypocrisy of some of those facing the tough questions and how it relates the allegations against Craig Thomson.

A LOT OF INFORMATION has been published lately in the nation’s press and online about entitlements, particularly travel rorts.

We have seen MP’s from both sides drawn into the scandal, that seems to be growing more with each passing hour.

It seems Tony Abbott thinks the taxpayer should fund his attendance at weddings, fund the marketing promotion of his book and fund travel, meals and accommodation for fun runs, cycling trips and triathlons.

Bill Shorten, who totally flogged Tony Abbott by ten minutes in one fun run, doesn't seem to have billed the taxpayer for the pleasure.

These taxpayer funded costs of Abbott’s are rapidly closing in on the $100,000 mark.

In the Coalition’s eyes, that is apparently perfectly legitimate, but when Craig Thomson watches an in-house movie worth $15 in a hotel on a business trip for the Health Service Union paid for by a HSU credit card, that somehow warrants two police charges and becomes a national scandal.

Tony Abbott’s dodgy travel claims total more than three times the figure of all the complete brought against Craig Thomson.

What is really interesting is that one of the destinations two of these MP’s travelled to was the NSW Central Coast ‒ that is, Craig Thomson’s former electorate ‒ for the wedding of Michael Smith. Those who attended the Smith wedding on our dime were Barnaby Joyce and George Brandis.

I haven’t dragged out the pot and kettle for a while, but it seems more than called for in this instance:

George Brandis should know better than to charge the taxpayer for flights, accommodation and even a government car to attend the wedding of a former shock-jock — after all, he was the one leading the witch-hunt against Thomson and Slipper.

Brandis used the lame excuse that there would be journalists at the wedding, and that as Michael Smith was involved in beating up both the Thomson HSU saga and the Gillard AWU allegations, he should be there to participate in the plotting. However, this sounds much more like being in the Liberal Party’s interests than those of the poor Australian taxpayer.

Brandis is either making up crap excuses on the fly, or he truly thinks that the only place that journalists congregate is at a former shock-jocks wedding, and he expected new revelations to surface on the HSU or AWU matters during the wedding. Personally, I think he may be reaching just a tad there...

Brandis clearly has a different set of standards for himself and his colleagues to those he expects everybody else to live by.

So what does Michael Smith think of the taxpayer funding two Coalition MP’s attendance at his wedding?

Surely he would frown heavily on it, based on his comments on-air over a similar situation in the not too distant past.

In September last year Jeff Jackson, former Secretary HSU Number 1 Branch and ex-husband of Kathy Jackson, and Shaun Hudson ‒ the former Assistant Secretary of the HSU #1 Branch ‒ did not contest charges of using Union funds to fly from Melbourne to Sydney  so they could attend the wedding of a HSU NSW Organiser.

On hearing of these allegations, Michael Smith ripped into Jackson, Hudson and the HSU over the issue, claiming that it was a misuse of members’ funds. Rightly so, I might add.

Tony Abbott and George Brandis have both spoken very highly of the HSU turncoat Kathy Jackson, so I wonder what they think of Kathy Jackson spending over $22,000 on ski holidays in 2005 on the Union’s credit card. Perhaps she is also allowed to be measured by the same hypocritical standards Brandis usually saves for himself and his Coalition colleagues?

There are some work entitlements that we all are entitled to, such as superannuation, accrued leave, and sick days. However, if someone is absent without leave they should not be accruing leave, or superannuation, or even being paid.

Below is a picture of a page from the 2009 Auditors report of the HSU Number 3 Branch, of which Kathy Jackson was secretary at the time. The page shows three staff who took leave without authorisation or filling in a leave form.

I have hidden the names of the first two employees for their privacy, but you will see that one had over 15 hours of unauthorised leave and the other over 44 hours; however, it is the third name that is of interest, as are the hours listed as absent without leave. 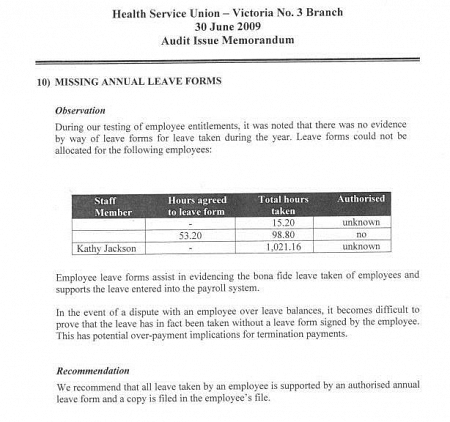 Kathy Jackson had taken over 1,021 hours off — that is 127 standard working days. Given that there are about 240 working days in a year, Jackson had more than half the year off without authorisation according to the auditor.

Yet despite this, Jackson still received her wage.

I hope that this matter will be looked into further so that members can reclaim the money back, along with any superannuation payments or other entitlements paid out.

As for the time off, I assume it must have been the first six months of the year, as according the HSU Number 3 Branch cheque account statements available on the Wixxyleaks page Jackson appears to have been working flat-out spending close to $60,000 on credit cards and cashing over $22,500 in union cheques in the last six months of 2009.

As I have written about before, Senator Eric Abetz is planning to launch an attack on union corruption as a major priority. We are as yet unsure what form this will take — a royal commission, a judicial inquiry, a Senate inquiry, or just a good old-fashioned Liberal Party witch-hunt.

Any inquiry into union corruption that does not look fully investigate the allegations and mountains of evidence against Kathy Jackson is clearly only being launched for political purposes.

However, inquiries and investigations for political purposes are nothing new — one only has to look at the crumbling case against Craig Thomson or the absolute farce of a case against Peter Slipper.

Rorting the system is not just about travel allowances, it is also about manipulating and abusing the legal system to suit a personal or political agenda.

When it comes to that kind of rorting, as the last few years have shown us, the Coalition are in a league of their own.