Craig Thomson faced court yesterday and 19 new charges. Peter Wicks fills in the gaping gaps in the mainstream media's coverage of these events. 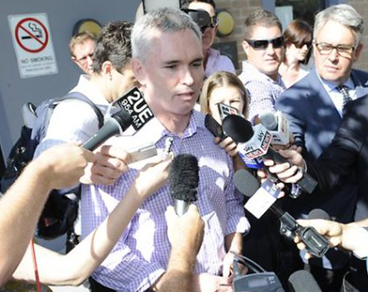 BY NOW, you have probably heard that Craig Thomson was in court in Melbourne yesterday.

You have probably read how there were 19 new charges laid against him and that this time his wife Zoe was not there to support him.

All of these things are true, but there is more that you probably haven't read in the mainstream media.

I'll try to fill in the gaps.

For starters, the 19 new charges — you probably don't know what they are.

The new charges are all fraud related and pertain to spending during Thomson's time at the Health Services Union. A complete list of the new charges is linked below.

In fact, I am of the belief that if Thomson were driving down a street and a five-year old girl in a wheelchair rolled out in front of him and he crashed into a telegraph pole to avoid her, the headline would read "Thomson damages council property" and would not even mention the girl.

In other news, since my last article was posted, I have received a few queries regarding my mentioning of how close Kathy Jackson was to the Williamson's, particularly regarding the $3,000 Bulgari earrings.

I should just clarify this relationship a bit better than I did.

The Williamson’s were not, in any way, friends of Kathy Jackson. I am of the impression that Jackson wanted to create the illusion of being a friendly figure, all the while conspiring to take over the NSW Branch — something she allegedly still aspires to do via her factional allies.

Any friend of Jackson’s probably understands all too well the notion of “Friendly Fire”.

For Thomson, however, it continues to come from all directions.

(Peter Wicks is a Labor Party member and a former NSW ALP candidate. Catch up on IA's full Jacksonville investigation by clicking here.)