Jacksonville 42: Craig Thomson in the land of Shock-Jock

AS VICTORIAN POLICE slowly work their way through over 40 boxes of evidence in their investigation into Kathy Jackson, she still has some cheerleaders in the far right realms of the media.

We continue to wait for the conclusion of the investigation into over the scores of boxes of credit card statements, signed cheque requisitions, payments for childcare, cheque stubs for cheques made out for cash, putting her fiance's children on the payroll, cash payments to ex-husbands and ex-members of staff, and an ex-employee who was still collecting a salary eight years after leaving the union, based on the signatures of Kathy Jackson and Michael Williamson. A long wait it is becoming too — almost as long as the list of allegations.

As a reminder of a fraction on the evidence uncovered here, below are links to Kathy Jacksons spending habits, and details of some of the many highly suspicious cash payments made to her:


Below is some more of the evidence we have uncovered, which is now in Vic Police hands — including cheque requisitions and remittances, bearing what appears to be Kathy's signature for payments made to her own company Neranto #10; company details, and details of ownership which include Kathy under her maiden name, Jackson; and a former director with the name "Furphy"

Again, this is just a tiny fraction of the evidence we have uncovered.

While we await completion of what could well be one of the biggest fraud cases in this country’s history, Jackson still has her cheerleaders who are happy to promote her distorted version of events for whoever is foolish enough to listen. Many of these cheerleaders are from the land of the Shock-Jock — a place that apparently shares a border with Jacksonville.

One of those cheerleaders is a man by the name of Michael Smith. Some of you may remember him as the apparent racist on one of the teams on the last series of SBS’s Go Back To Where You Came From, others may know him from his days at 2UE, and a some may know of his infamous blog site.

Smith's site is made up of opinionated right-wing blogs, most of which he writes himself. It would be hypocritical of me to condemn him for that, being a left-wing blogger myself — however, in my view, it is arrogant in the extreme to name his site a news site just because he has a tiny AAP feed. Smith, however, has chosen to take the arrogant route.

Now, though, Smith has waded into waters he seems to not understand — and it appears he has been caught in a rip.

Smith has made a deep dive into the Thomson arrest debacle — a deep dive indeed. However, given his information, and his apparent need to

“make full disclosures of my interests in this matter”

he appears to have not noticed he is mistakenly diving deep into the kiddies wading pool.

He seems desperate to upgrade to the adults pool, but doesn’t seem to understand how foolish he will look in there with floaties, as that is what his logic seems to imply he should be wearing.

Smith is also quick to point out that any claim that the police only asked Thomson in for a chat – rather than the original story that Thomson refused a summons to report to police in December – is a “bald face lie”. In order to prove his point, he shows a section from an arrest warrant as in the picture below, no more no less.

You may notice that there is no date shown at all, which is kind of crucial when trying to prove a point about the date the warrant was released.

You may also notice that the wording is identical to the warrant pictured below that he has on his website as further evidence dated 30th January 2013. Not December last year. This is the warrant police used to arrest the following day on the Central Coast of NSW for the waiting cameras — smack bang in the middle of Tony Abbott's address to the National Press Club in Canberra. 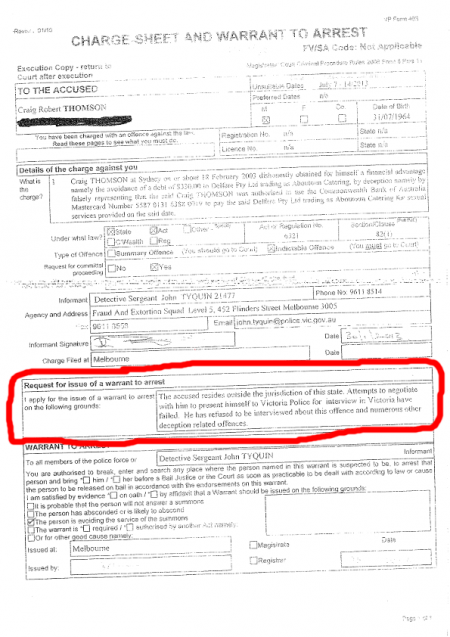 The truth is: there was no summons issued in December for Thomson to avoid.

In fact, it even confirms that the summons was issued on the arrest warrant. That's because in the "Warrant To Arrest" section, you will see that Detective Sergeant John Tyquin has ticked the box that states "The person is avoiding the service of a summons".

But, wait a minute ... how can someone avoid being served a summons that has already been served?

How exactly did Thomson allegedly avoid the service of a summons?

He was in the country, he was not wearing a disguise or travelling with false documents, he was mostly at home with his family, or at his electorate office. In fact, when the team of police went in to arrest him, he was not hiding in a secret hole in a paddock, or in a cave — he was in his very public electorate office.

in fact, after reading about his own impending arrest the day before, rather than run as the warrant would seem to suggest, Thomson tried to contact police several times, as did McCardle. The police did not return their calls. Ironically, it seems the only ones avoiding anyone were the police avoiding Thomson.

My tip for Thomson next time would be to pretend to be from News Ltd — then they'll talk to you. It seems it was vitally important the press know all the details of the arrest so the show could be seen by a larger audience.

Interestingly, Smith's claims not only make Thomson and his solicitor Chris McCardle “Bald Faced Liars” — but apparently so is Detective Superintendent Col Dyson, the Commander of the NSW Fraud Squad, since as he later confirmed McCardle and Thomson's claims — and even apologised for any confusion. The following day, the claims were backed up by every major news source in the country. Of course, Smith's "news" site didn't report the correction — unless it briefly appeared on his AAP feed.

So why would Smith go out on such limb?

The answer may be in one of his posts, regarding Graham Richardson's comments on Thomsons arrest.

I should now make full disclosures of my interests in this matter. I was a member of the Victoria Police in the 1980s for about 4 years. I was at Port Melbourne Police Station at around the same time that Tyquin was there but I do not recall him as a friend from that time. I had not spoken with Tyquin until he phoned me early last year seeking evidence from me about my on the record broadcast interview with Thomson on 2UE in 2011.

I met with Tyquin in Sydney and I gave two detailed statements to him about Thomson. Tyquin has never told me anything to do with the specific timing of Thomson's arrest and for about 3 months prior to Thomson's arrest Tyquin and I did not speak at all.

I have spoken with Tyquin since Thomson's arrest.

This statement seems to raise more questions than it answers — as parts of it are very specific, while other parts are more vague than Smith's apparent understanding of arithmetic. With that in mind, I emailed Michael Smith some questions on Saturday 9 February 2013, to the email address listed on his website.

Below is the email, exactly as it was sent:

I have a blog site that you may have heard of, WixxyLeaks and many of my articles are published at Independent Australia.

You have been writing quite a bit on the Thomson arrest lately, and one of your recent posts that referred to Graeme [sic] Richardson's comments had what you called a "full disclosure" in it.

I had some questions that have arisen from that disclosure and also your apparent backing of Kathy Jackson that I hope you won't mind answering for my readers.

The questions are below, and any answers that I publish I will publish in full and not edited on that you have my word.

My contact details are at the bottom of this email, please feel free to contact me at any time if you would like to discuss this further, or if you need any clarification.

Thank you for your time, and I hope you enjoy your weekend.

Thanking you in anticipation

On Monday morning, I received an automated response that said due to server difficulties on his end, my email would have its delivery delayed for another two days. Needless to say, I will post his full response if and when one comes.

Mr Smith, next time you chat with your buddy of a non-specific timeframe, maybe you could do me a favour and remind him of the letter linked below. It kinda needs urgent attention. 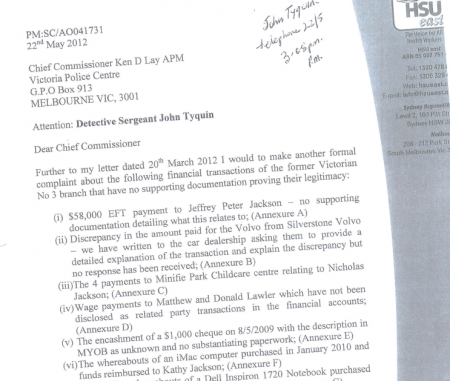 I have spoken before about "Thomson The Musical" and how this whole drama has seemingly become a stage-managed production involving the Coalition, the police, and the right-wing media. Commentary such as Smith's not only encourage this theory — but the lend a good deal of weight to it.

Here we have an ex shock-jock, now a right-wing blogger who has a past in the police force, feeling the need to give a disclosure statement that raises more questions than it answers. Not only that, he has made bold statements about the case without the necessary evidence. He makes comments on a warrant and declares that everyone with the opposing view is a "bald face liar". He even goes to the trouble of putting a small section of a warrant up, without the date shown, to supposedly prove every body else's "bald face lies". Within days, his theory has been proven incorrect by police, but he makes no move to print a correction. Just who really is the bald-faced liar, Michael Smith?

Now we have Tony Abbott, on cue, talking about putting a Private Members Bill through Parliament to amend the Fair Work Act to increase penalties for corrupt union officials to $340K and five years jail. Geez, I wonder what could have brought that on? Hmmm?

Looks like "Thomson The Musical" still has further to run in its season. I wonder which town it's headed for next.

It has been pointed out to me by a bloke named Bill on my comment site that I have royally screwed up. Turns out he’s right.

I have mistakenly not realised that there are 2 charges per sheet on the bulk of the Thomson charges sheets uploaded on Michael Smiths website, and the number of charges in fact totalled 154.

I apologise to Mr Smith, and to you all for my error, it was certainly not my intention to make such a huge dick of myself as I have clearly done in this case. If I make an error, I always correct it as soon as possible.

I have removed the incorrect part from the post now.