TODAY, CRAIG THOMSON once again found himself in court, we understand with his wife Zoe by his side. This time around, however, he had a little more time to prepare, and to organise counsel.

In a short appearance, Thomson was granted bail on the 154 charges before him.

The last time Thomson saw the inside of a courtroom was way back last week, Thursday in fact. This was the day that Victoria Police rocked up to Thomson's office with a posse of NSW detectives, on the premise of a dodgy warrant, to lay fraud charges for purchasing an ice cream and the like.

Thomson asked the question yesterday, probably not really expecting an answer, if he was the only person in Australia to have a charge of fraud brought against them for less than $20. It's an interesting question, as each charge has its own paperwork, and requires its own mention in court. It does seem rather daft to be laying such petty charges at the taxpayers’ expense. If the Victorian Police are looking for a more intelligent investment of time and money, then I'd suggest going into a pyramid scheme with the Nigerian Royal Family.

Victorian Police have the slogan "The Way Ahead". Well, if spending thousands of dollars, countless police hours, and using up court time to charge someone for buying a $12 ice cream is "The Way Ahead", then I've clearly been facing the wrong direction all my life. To me this would only be the way ahead if your head was sticking out of your rear end. Even Joe Hockey could figure out that this is a glowing example of dud maths.

Speaking of maths, most people are not aware that each alleged offence in this case is actually two charges. The doubled number is reported so it looks worse for the defendant — that things are twice as bad as they are. The second charge is laid for the authorisation of the alleged purchase, for example buying an ice cream is a charge, signing the credit card slip authorising payment for the ice cream is another.

At Craig's brief appearance in Wyong Court on Thursday ‒ after his strip search which was first reported on IA ‒ the magistrate handed down the conditions of bail. One of those conditions that you may have heard about is thatThomson not make contact with any sex workershe is alleged to have seen in the past, but without providing any other details. This received quite a bit of commentary when it became known.

Funny, I don't recall seeing that reported anywhere else at all. Why not?

The Victorian Police ‒ the same ones who lied regarding the non-existent December warrant and the same clever crew spending thousands upon thousands of dollars to charge a guy for spending $12 ‒ actually set the bail conditions. That third condition was certainly designed specifically for the press, as it was absolutely designed to portray guilt, and so extremely inappropriate that a judge felt the need to comment on the record.

With standards like this, the Victorian Police seem slightly less reliable than a pitchfork damaged water-bed. I'm somewhat surprised they didn't make not invading Poland a condition of bail, they may as well have.

With Police setting bail conditions to intentionally portray guilt and such a high-profile case having such dodgy warrant procedure, I think an investigation into police conduct regarding this case is required.

The ridiculous bail condition was amended by the prosecution today so as not to imply guilt, and so that Thomson could be made aware of whom he was not supposed to talk to. As Thomson denies using the brothels, it would be hard to determine who he had apparently slept with in the imagination of others.

A demonstration of the shambolic nature of the police case against Craig Thomson was demonstrated by the fact they are unable to provide Thomson’s defence with a list of witnesses.

From the Sydney Morning Herald this morning [IA emphasis]:


Mr Thomson arrived at the Melbourne courthouse just before 9am and told the waiting media his priority was to ''get this issue on and over with as quickly as possible to clear my name''.

His case was called before magistrate Donna Bakos in courtroom 1 at 10.24am.

Defence lawyer Bill Dwyer told the court Mr Thomson was concerned at the way he had been brought to the court.

Mr Dwyer said Mr Thomson had been ordered to appear in Melbourne at short notice and ''he's anxious to get these matters resolved''.

Mr Dwyer asked the court for a witness list to be provided to his client but the prosecution said it was not available.

Outside court after the hearing, Mr Thomson stood with his wife in front of a large media pack and criticised the police handling of the case.

‘‘You’d think it was the AFL grand final with all you guys here,’’ Mr Thomson said.

‘‘Look, what was disappointing about today was of course it became clear that not only last Thursday was wrongly done by the police but after 18 months in relation to investigating this matter ... they still don’t even have witnesses that they for able to produce for us.

‘‘We’re trying to get on with this, to get it on as quickly as we can.

‘‘It wasn’t encouraging that the police aren’t even ready after all this time.

There has also been a lot of talk of Christopher Pyne and David Bradbury's appearance on ABC Lateline on Friday night, and the comparisons between the Craig Thomson case and the Mary Jo Fisher case.

Christopher Pyne said that it was unfair and inappropriate to compare the two cases — and if anyone is an expert on the inappropriate, it's Pyne.

I'm afraid that on this one it seems, I am going to have to agree with Pyne. But before your jaw drops so far that you wish you were wearing steel caps, let me explain why:

So, an unfair comparison indeed.

Another thing I find odd is that Thomson is now an Independent, however according to the Coalition his previous Labor Party membership, and being elected as a Labor member, means that any controversy around him reflects on the ALP.

Logic would therefore mean that Peter Slipper is reflective of Liberal values. He was preselected many, many, many times as a Liberal member. Far more times than Thomson. He was Deputy Speaker as a Liberal Member. It seems the Liberal Party only started to dislike him when he was promoted to Speaker.

In fact, the differences between Mary Jo Fisher and Thomson and Slipper could not be greater.

Fisher was allowed to resign from the Senate with dignity, Labor members shaking her hand, wishing her the best, and paying their respects.

Compare that with the relentless onslaught of accusations and character assassination aimed at Thomson and Slipper for the better part of two years by the opposition, led by cheerleaders Abbott and Pyne. The choreography of their staged managed "Thomson, the Musical" production with police, Premiers, and State Ministers dancing to their tune rivals the choreography of a Britney Spears concert. With dancing talents like those below, it's easy to see a career path ahead for Abbott.

Actually, upon a second look, it looks like Abbott has spent more time on dancing lessons than he has on making policies. 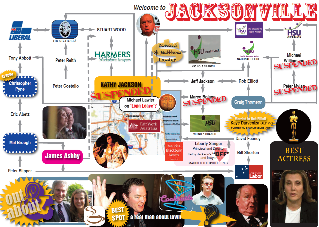