Back in Jacksonville, Katrina Hart may have overstepped and completely missed the mark in a clumsy bid to prepare the path for her mentor Kathy Jackson to take over the NSW branch of the HSU. Peter Wicks reviews the upcoming HSU elections.

Over the last few weeks, we have seen the Gillard Government talk about Gonski and about putting more funding into Australian schools of all types. Naturally, this is a priority.

In stark contrast, here in NSW this week, we have seen the O’Farrell Government announce $1.8Billion in education cuts.

I understand that Barry O’Farrell wants to save some money — Barry won’t look real flash having two deficits in two years. Especially given it took the previous NSW ALP regime 13 years to have two deficits.

While cash is splashed out on extra parliamentary secretaries, making this the most expensive Government the state has ever had (another broken election promise), and pay rises and extra funding is given to the Shooters and Fishers Party, Barry makes cuts where it is least important in the Liberal mind: education, public transport, workers compensation for emergency services, the public service — these peripheral sectors of the economy are all under Barry's axe.

You may think I just want to have a whinge, but not at all! I want to help Barry save a few bob. You know — do my bit. All for the good of the state, of course.

So, I have found an area of the public service that we could save some money on and her name is Katrina Hart.

Normally, I would be opposed to cutbacks in the public health sector — but not in Katrina’s case, as it seems she has no respect whatsoever for those who pay her wages. You know — us, the taxpayers.

You see, Katrina is running a ticket in the HSU elections and has the support of our favourite subject of Victorian Police investigations, Kathy Jackson.

Jackson, despite being under police investigation for allegedly rorting the HSU in Victoria for years, is now looking to quietly infiltrate the NSW HSU, seeing as though Victoria is now a financial basket-case. Katrina Hart, it would seem, is just the ticket!

You see Jackson is unelectable — nobody wants her. This is why many have strong suspicions that either Katrina, or her number 2 on the ticket, Ted Hinge, will step down after 12 months and hand their job over to Jackson. Jackson has never faced an election, she has always stood unopposed. 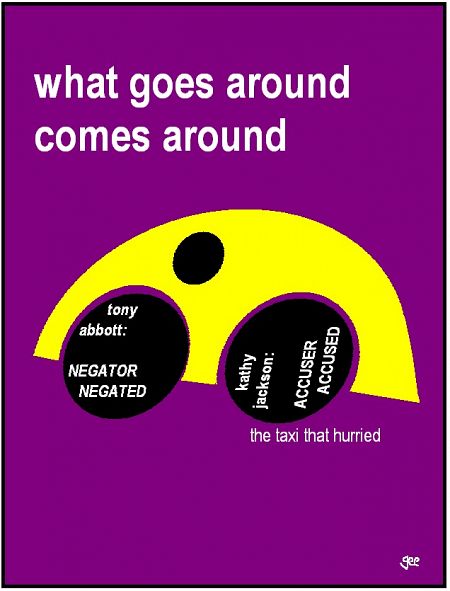 Anyway, why should Katrina Hart be sacked, you may well ask — aside from having some questionable friends.

Katrina has campaigned for the election using her database, which was possibly gathered from a questionable source, as the email was sent on the 6th of September — the day before nominations opened. By sending her campaign emails using a hospital computer, she has also broken further regulations — unless she has the written authorisation by NSW Health Management. A hospital computer is the property of NSW Health — a taxpayer-funded computer.

This is clearly in breach of NSW Health regulations in regards to staff conduct and the use of hospital equipment for private purposes. Bear in mind, this may not be just a few emails; it would appear that the email may have been sent to tens of thousands of members— all at taxpayer expense.

I also wonder whether this campaigning was done during working hours. I would hate to think my tax dollars were spent funding campaigns for a disgraced factional leader and a social worker with absolutely no respect for either her responsibilities or the rules under which she, and every other public servant, are employed. Or does Katrina Hart think she is above the rules?

The copy of the Hart felt drivel that I received was sent at 3:24pm. That sounds a bit like “during working hours” to me.

In yet another blatant display of contempt for the rules, Katrina has signed off her pages of propaganda using this title “President Randwick Campus General Sub Branch”. I wonder if the members of the Randwick Campus General Sub-Branch held a meeting and endorsed her candidacy, allowing her to use this title. Many have raised doubts as to whether she is using this title without endorsement.

Katrina Harts unsolicited email can be viewed in full via the below link:

You will notice she talks herself up a lot. Actually, no she doesn’t. This is quite strange, even for a citizen of Jacksonville.

Most candidates in an election will talk up their strong points and highlight their accomplishments. Most see it as a way to show that they deserve your support and are worthy of the position they are running for. It also shows a bit of know-how and displays a bit of positivity.

Katrina, it would seem has no positive attributes to speak of at all. No talent for anything, no bright ideas for taking the union forward. If she had any, then surely they would have made it into her pitch, right?

In fact, there is more about her number 2, Ted Hinge’s accomplishment (deliberately not plural) in one sentence, than there is about Katrina in the whole volume of propaganda she dumped on unsuspecting members.

What Katrina Hart does talk about is factionalism. There is a lot of talk of Michael Williamson and his cronies and she accuses every other person running but herself of being factional.

And the funny thing about that address is — she did not want that address made public and complained to the administrator after I mentioned the suburb, Chifley, in another of my articles. I’m not going to make any judgements on Katrina’s IQ level, but I’d suggest if she wanted the address kept secret, it’s probably not real wise to put it at the bottom of an email you send out to thousands of members you hope are easily led.

I have deleted the address from my copy, you know, coz I’m a nice guy and all…

There is not a real lot to say about Katrina Hart, as her email would suggest. What I can say however, is that she is an Allied Health Social Worker and good friend of factional leader Kathy Jackson.

The number 2 on Katrina’s ticket, Ted Hinge is a health manager. This means that Ted is a boss, just the type of person you want to run a union — you know, the type that most approach the union to complain about.

In fact, Ted is part of a sub-branch of the union that was created because the rank and file members refused to participate in branch meetings when Ted, and others like him, were involved. After all, why would people want to participate in a union meeting that their bosses attend?

Neither Ted nor Katrina are from the rank and file; in fact, judging from the lunatic propaganda and manic finger-pointing in Katrina’s unsolicited email, I’d suggest they are from the outskirts of Jacksonville.

Speaking of Jacksonville and supporters of the Jackson/Bolano faction, check out the flyer below from the Fleur Behrens campaign: 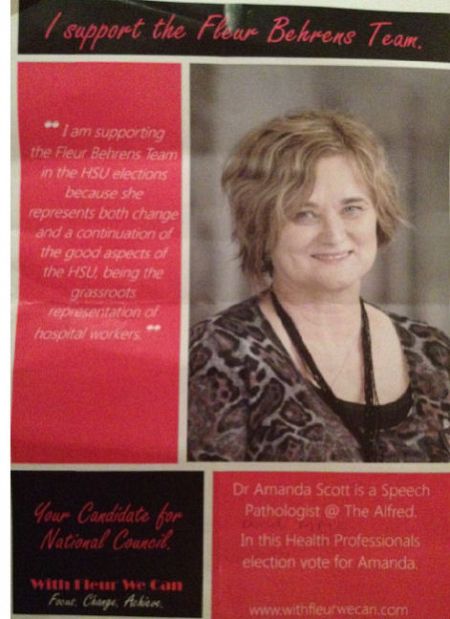 I love a candidate that supports both “change and continuation”. Hmmm…

As for the good aspects of the Union looking to continue under Behrens and her factional friends, do I really need to link that video of the berating and brawling at HSU meetings yet again?

As for the slogan “With Fleur We Can”, I would suggest if it can be done with Fleur, it is something probably best avoided.

To those of you trudging through the bowels of your spam folder looking for something to read that may be remotely credible, I would suggest avoiding any drivel from camp Hart, Behrens or Bolano. Stick to Viagra sales or that one that tells you that you won a European lottery; they are far more believable and I'm sure you will find them much more mentally stimulating.

Ahhh… election time in the HSU. There may have been some new keys cut to the crazy house in Jacksonville, and some new faces clutching them, but we all know what lurks behind the door.