It ain't easy being Green

The Greens are at the crossroads as a political party — should they focus on the wider concerns of the electorate, or should they stick to environmentalism? Dr Peter Cock says they need to stay green. 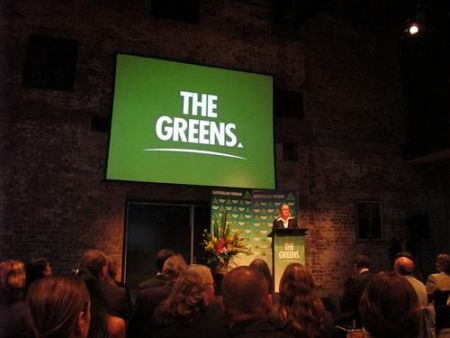 POLITICAL DISCOURSE in Australia is dominated by jobs, deficits, refugees and living costs — and how these affect individuals. To tackle them well is to win an election. So, if the Greens want to remain relevant in Australian politics, should they respond to the issues that get media attention?

They seem to think so, having recently announced a “softening” of policies in preparation for the election. It’s the wrong course for the party.

The Greens need to accept their role as an irritating and educating core that challenges the political centre. To do so, they need to remain dedicated to applying a “green lens” to political issues and focus on educating the electorate about the impact of any proposed policies on our ecology.

The most difficult task is putting habitat before species and species before individuals. This difficulty is multiplied when the species in question isn’t our own.

Environmentalism has mobilised concern for human injustice and redirected it to other species. Live sheep trade is a good example. We are only just making connections between the well-being of other species and ourselves.

After forty years of environmentalism, “green” issues surround us. However, the focus has been to protect environmental victims. This has limited environmental advocates' ability to challenge the values and social structures that create them.

The challenge of environmentalism is to educate citizens about deeper, harder issues and then turn that into support. Most donor and public resources help alleviate the suffering of human individuals and groups. There is little left for habitats, other species or future generations. While important, focusing on individuals limits our ability to create real change.

When environmentalism enters mainstream politics in the form of the Greens, the “green lens” of public advocacy is too caught up in humanitarian actions without reference to ecological impacts. For example, Greens Senator Sarah Hanson-Young’s focus is on immigration and refugees as a substrate of the primary question of a sustainable population.

The humanitarian crying out for the suffering of refugees needs to be focused on what drives people to become refugees, like our engagement in unjust wars, environmental damage and over-population.

The environmentalist aspiration is to make all political parties “greener” and not to claim it as their own. There are many shades of green, yet the Greens need to be accountable to ecological criteria as the basis for the assessment of all policies. The Greens' point of difference as a party should be to make green criteria central to policy, whether this be gay marriage, a wealth tax, or hunting feral animals in national parks.

The natural care for our own species can be the main vehicle through which environmentalists promote caring about other species and shared habitats. If they are to make the few supporters into the many, they have to confront their attachments and lead them to connections between their individual interests, our species, and the role of other species in sustaining life.

Forty years of environmentalism have revealed a politics embedded in using accumulated resources to suppress change. However, there is increasing awareness that our relations with the earth are at a critical junction. While small groups are creating a transformative possibility, many despair.

Many people still may not grasp the arguments made by environment activists — that to have a chance of avoiding catastrophe, the human race needs to end its perceived war against nature and embrace change. The true challenge of environmentalism is to gain wide acknowledgement of the possibility for societal transformation and then achieve it, rather than just blaming particular groups or corporations.

As important as grassroots efforts, change at the top of green politics is necessary. Applying a “green lens” to policy is part of this. It has the potential to shape not only political discourse, but also to encourage environmental thinking in the general population. Doing so, they can be a source of hope and energy for transformation.

The Greens would be remiss to abandon their part in guiding the change, and inspiring the next wave of ecowarriors to bring it to fruition.

It ain't easy being Green

26 April 2013, 11:38am The Greens are at the crossroads as a political party — should they focus on the ...
Join the conversation
comments powered by Disqus
News updates