Is a lack of public trust causing the downfall of Western democracy?

As Europeans and Americans lose faith in public institutions, is Western democracy starting to fall apart at the seams, asks Frank Viviano. 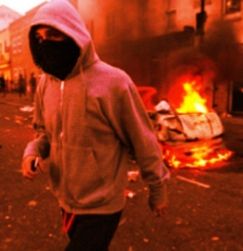 Is Western Democracy coming apart at the seams? A decade ago, only paranoid alarmists would have posed that question.

Today, it may be an expression of cold, brutal realism.

On both sides of the Atlantic – from the fires now raging in large stretches of London, to the political chicanery that brought the US economy to its knees in early August – the institutional framework that came to define modern democracy in the 19th century is in deep trouble.

The principal organs of financial oversight and management are in tatters. Ferociously xenophobic political movements, an entire constellation of Tea Parties, now play important roles in nearly every European nation, as well as the United States.

Faith in elected leaders and legislatures, the central and defining institutions of democracy, has never been lower.

According to the Pew Research Center, the proportion of the US public expressing trust in the federal government has fallen from just under 80 per cent in the late 1960s to barely 20 per cent today.

A European Union poll last September found that only 29 per cent of voters in its 27 member states trust their own national government. Less than 20 per cent believe that their elected representatives are capable of successful action "against the effects of the financial and economic crisis".

A meagre 7 per cent trust the United States, the West's political and economic giant, to address the crisis – a resounding vote of no confidence a year before the disastrous US Congressional budget struggle.

These numbers, put bluntly, are staggering.

Angry, violent civil disturbances, first in Paris and now in London, have revealed enormous tinderboxes of alienation. With the gap between rich and poor – between philosophical democracy's matchless promise and contemporary democracies' transparent inequities – expanding at a dizzying pace, more explosions are likely and perhaps inevitable.

Abroad in the Middle East and Central Asia, and at home in its urban streets, the Western Alliance is increasingly unable to maintain its values or defend them.


Murdoch affair – another betrayal of trust

Two factors separate these developments from the periodic lapses that marred democracy's evolution in the past. The first is that they are intimately connected, a systemic malady. The second is that their strains are being felt not in one Western nation or even half a dozen, but in all of them simultaneously.

The links were strikingly evident in the scandal that erupted over the operations of Rupert Murdoch's News of the World, the United Kingdom's largest-circulation newspaper.

The story opened with what appeared to be narrow abuses of individual privacy, the hacking by News of the World reporters into the cell phone of Milly Dowler, a 13-year-old British girl who vanished on the way home from school and was later found dead.

Within days, the scandal grew into an expose of byzantine collaborations at the commanding heights of business and politics, leading not only to the firings and eventual arrests of Murdoch editors, but bringing down powerful figures in the British government and the nation's top law enforcement official.

Then the storm crossed the Atlantic, setting off an FBI investigation and prompting the resignation of Les Hinton, chairman of Dow Jones and publisher of the Wall Street Journal. Both companies are also owned by Murdoch, as is the Fox News Channel, the chief broadcast voice of the populist American right.

A limited story about the callous treatment of a family tragedy had morphed into a full-fledged allegory on the cynical corruptions of business and politics, all in the name of "the people" – the mostly lower-middle-class voters who are the principal audience of Murdoch's publications and broadcasts in Britain and America alike.

The tragedy is that their betrayal, which is precisely what it amounts to, is also a betrayal of their waning faith in democracy.

A private survey released by the Brussels-based polling firm Burson-Marsteller in June, even before the Murdoch scandal broke, found that Britons' trust in their government had dropped by 51 per cent in just two years.


Decline of the Fourth Estate

In the end, another of democracy's critical institutions, a reliable and vigilant press, blew the whistle on the Murdoch empire's shenanigans. The most damning evidence was hunted down by the investigative team at the Guardian, a British newspaper that stands at the opposite end of the professional spectrum from the tabloid sensationalism of the News of the World (which Murdoch eventually shut down in an effort at damage control).

Voters need a dependable flow of facts, the kind the Guardian team chased down, to interpret events whose complexities are all too often lost in the braying of extremists. Without a well-informed electorate, democracy is a sham.

But like public trust in government, the mainstream press is caught in a precipitous downward spiral. In the brief span of four years since 2007, more than 25 per cent of all full-time reporters at US newspapers have lost their jobs. In 2009 alone, the toll exceeded 6,000— the largest single year's cutback every recorded.

The United Kingdom, Spain, Germany and Italy, with a combined population roughly 50 million less than that of the United States, laid off 6,500 reporters that same year.

Meanwhile, the sensationalist tabloids and their broadcast equivalents prosper, scandals notwithstanding, with the nihilistic right as prime beneficiaries.

There is no mistaking its impact.

The European Union, an extraordinarily ambitious experiment in establishing democratic institutions across national boundaries, has brought six decades of continuous peace to a continent where history was defined by ceaseless wars among the French, British, Germans, Spaniards and their neighbors for two millennia.

Amidst a chorus of vapid nationalistic slogans on every side, the EU now stands perilously close to outright collapse.

In the once-solid heartland of western tolerance, the Nordic countries and the Netherlands, extremist anti-immigrant parties have been voted into every national parliament and exercise decisive power in many. The rhetoric that seized the imagination of Anders Behring Breivik, and sent him on a bloody one-day rampage in Norway that took 77 lives, is heard daily in the very legislatures where social democracy was polished into the globe's most comprehensive health, job-creation and pension structure.

In Italy, where I live, the most important coalition partner in the government of Prime Minister Silvio Berlusconi is the Northern League, a party openly dedicated to the dismantling of the Italian state. The League's close American cousins, in spirit as well as in principle, are the Tea Party legislators of the US Congress.

It also demands the forced repatriation of immigrants, from a country that saw 25 million of its own people leave for abroad in the lifetime of my four grandparents, who were among them.


(This story was published in Truthout on Friday, 12 August, 2011 under the title 'Eye on Europe: Once Public Trust Goes, Can Democracy Be Far Behind?' and has been republished under a Creative Commons licence.)