In a post-truth world, opinion is as good as fact

Sadly, this brave new post-truth world will not belong to the brightest or those who can base their argument in fact but to the most popular, writes Benjamin T. Jones.

Welcome to the post-truth world

Welcome to the post-truth world, where opinions are as good as facts, ignorance is as good as knowledge and experts simply don’t matter. In the wake of the shock Brexit result and Trump’s contentious victory in the U.S. presidential election, the Oxford Dictionary has declared “post-truth” to be the 2016 word of the year.

The definition of post-truth is terrifyingly Orwellian:

'Relating to or denoting circumstances in which objective facts are less influential in shaping public opinion than appeals to emotion and personal belief.'

For those who understand the distinction between fake news and fact checked news, peer reviewed science and unsubstantiated blogspots, nuanced debate and screaming at strawmen, the descent into post-truth politics is not merely frustrating but terrifying.

The disappearance of facts

From the days of the Greek stoics until now, the art of politics has always concerned itself with spinning facts according to ideology and with a good dose of Machiavellian ambition to boot.

The unemployment rate is five per cent. “Fantastic”, says the Government, “this proves our economic plan is working!”

“Terrible”, retorts the Opposition, “this is still far too high”. One newspaper praises the government — another denounces it.

None of these opinions are right or wrong. A myriad of opinions can be given on the fact but what hope is there of intelligent debate if the facts themselves are simply negated?

A fact, by definition, is something that can be established with evidence. Of course, there is nuance and some facts are less clear cut than others. The five per cent unemployment figure may not factor in under-employment, or the figure may be impacted by a temporary jobs boom in a new market.

The data itself, however, is a fact, taken by independent public servants. How much damage to our democracy then, if a fake news site simply posts an official looking article saying the real figure is 20 and opponents of the Government send it viral on social media?

Fake news at The Oz to distract from shocking real news on the tanking economy. Pls read & retweet. https://t.co/Ne9emV4eKt @IndependentAus

For a real world example, consider climate change. The earth has warmed over the last century. This is a fact. It is a fact because, among other things, we have recorded the temperate for that long. NASA have detailed global temperature changes here.

Now it is possible to argue that the temperature increase is a natural climate fluctuation rather than the result of human activity. This argument has to contend with the fact that the ten warmest years in the 136-year record all have occurred since 2000. It also runs against the expert opinion of the vast bulk of the scientific community. But, alas, at least the fact of global temperature increase is accepted. 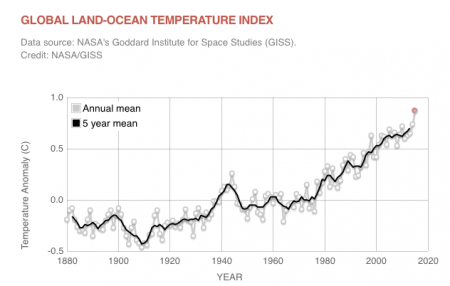 Both of these approaches are opinions steeped in ideology but, mercifully, in response to a fact. In a strict sense, neither is right or wrong, they are simply two competing opinions at the marketplace of ideas.

But what hope for meaningful engagement is there if someone simply dismisses the facts? Extraordinarily, Senator Malcolm Roberts of the far-right One Nation Party, not only claims climate change is not connected to human activity but that the temperature measurements themselves are wrong.

In a painful tête-à-tête with Professor Brian Cox, Roberts insisted that there is no empirical evidence that the earth is warming (despite Cox at one point literally throwing evidence at him). Instead, Roberts made the extraordinary claim that NASA had deliberately produced false figures — a claim he has no empirical evidence for and NASA, obviously, rebuked.

Roberts can perhaps be dismissed as a political oddity. He is a crackpot member of a minor party who was elected with just 77 first preference votes in 2016. What is far more disturbing is that the soon-to-be most powerful man in the world has expressed similar opinions — in the face of facts!

Donald Trump has softened his tone, claiming simply that “nobody really knows” if climate change is real or not. This is simply false. We do know! It is no longer a matter of opinion when there is reliable evidence.

Sadly, this is an improvement of Trump’s previous claims that climate change was a “hoax” created by the Chinese. Of course, Trump has no evidence for this and it crudely ignores the fact that the earth is warmer than it was a century ago and the rate of increase is accelerating.

But this is the post-truth world. Fact and opinion have merged into one. A peer-reviewed article in a science journal and a random tweet carry equal weighting. There is no point spinning the facts when you can simply ignore them and present your own.

Snowing in Texas and Louisiana, record setting freezing temperatures throughout the country and beyond. Global warming is an expensive hoax!

The concept of global warming was created by and for the Chinese in order to make U.S. manufacturing non-competitive.

The erosion of authority

“You can’t believe everything you read in the papers”, my Mum used to tell me. This is true, of course, but it makes me nostalgic for the time it represented, a time when the authority of news was still respected.

Newspapers professionalised in the late 19th century and subsequently carried enormous authority. Whether or not readers accepted the spin, it was understood that the articles themselves were fact-checked. The quotes, the figures, and the reports themselves were accurate and, guided by a code of ethics, retractions and amendments would be made if needed.

News sources like the ABC, BBC, New York Times, Washington Post were held in high esteem because they built a reputation on reporting facts first and foremost with clearly defined sections offering opinions.

In the post-truth world, there is no room for facts. All news is opinion-editorial and the source is either an echo-chamber for one ideological camp, or the biased squeals of the enemy.

In Australia, the Liberal and National Parties have undermined the national broadcaster for years, arguing that the ABC is biased towards the political left. Detailed audits that have repeatedly cleared the ABC of bias do not matter in a post-truth world. The seed is well and truly sown and even if you are only trying to highlight some facts to start a discussion, the facts themselves are rejected by some conservatives if taken from the ABC.

The New York Times has a global reputation for accuracy and high journalistic standards. It has been a consistent target of Trump throughout the election campaign for its perceived bias.

The @nytimes states today that DJT believes "more countries should acquire nuclear weapons." How dishonest are they. I never said this!

What of truth then?

Perhaps the saddest aspect of the post-truth world – and I’m certainly revealing my own bias here – is that academics are also losing their authority. It takes three to four years of study to get a bachelor’s degree, which provides a terse overview of our accumulated knowledge of a subject. Another one to two years will earn a master’s degree and a firm grasp of the existing literature. Another three to five years will earn a doctorate, where the recipient is not only an expert in their field but a contributor to knowledge. Add to that, decades in academia, attending conferences, publishing papers, supervising (and learning from) new PhD candidates and you have a reasonable claim to some authority.

The opinions of an expert academic are still just opinions, but they are opinions based on years of research and a careful study of the facts. As one lecturer tells his students, in academia you are not entitled to your opinion, only what you can reasonably argue. When academics form a consensus, there is an enormous weight of evidence behind it that shouldn’t be dismissed lightly — and not without similarly compelling evidence.

This is why it is so grating when people do their own “research” on Google and decide after so many hours that the ivory tower egg heads have it all wrong. Never mind the overwhelming consensus of scientists and doctors, and decades of research, if someone wants to believe vaccines cause autism in a post-truth world, they can.

Like Roberts and his corrupt NASA claim, they have to invent an extraordinary story of “big pharma” paying off every single peer-reviewed article on the topic. But in the era of fake news, that is not very difficult to do. And, it must be granted, it is not simply tin foil hat loonies that spread this completely unsubstantiated claim. The vaccine-autism link has been suggested by, you guessed it, the president-elect of the United States.

Healthy young child goes to doctor, gets pumped with massive shot of many vaccines, doesn't feel good and changes - AUTISM. Many such cases!

So welcome to the post-truth world. Where down is up, up is down, and 2 + 2 = 5 if you believe it in your heart. Knowledge has been democratised and the line between fact and opinion has blurred into insignificance. This brave new world will belong not to the brightest, not those who can base their argument in fact, but to whoever is most popular.

The age of demagogues is upon us. What could go wrong?

Dr Benjamin T. Jones is an ARC fellow in the School of History at the Australian National University. You can follow Dr Jones on Twitter @DrBenjaminJones, on Facebook here or on his blog Thematic Musings.