I know what your invisible hand has been doing

Having previously shown how the pursuit of profit guarantees loss, inequality, poverty, and instability, Herman Royce now explains why economic competition results in prices and outcomes that are not at all ‘optimal’. 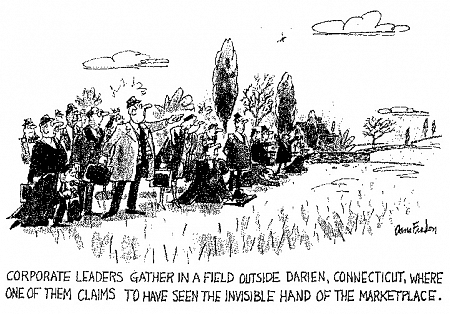 Orthodox economics claims not only that market competition ‘optimally’ regulates prices, but that, left to pursue their own interests, people are often “led by an invisible hand to promote" [1] the general interest.

The notion of a guiding Invisible Hand was conceived by Adam Smith over two centuries ago. Smith believed that, if free to pursue their self-interest, people generally behaved in ways that improved society; the greater the effort made for self-betterment and the more competitive the striving, generally the greater (more optimal) the public good.

Smith’s logic was based on the Law of $upply and Demand (L$D). Putting Smith’s reasoning into what it calls “more modern language”, a textbook explains it this way:


“Each person will be motivated by rational self-interest to employ the resources under his control wherever he can get the highest possible price. But high prices reflect scarcity of supply relative to intensity of consumer demands. Hence the private incentives will work continuously to overcome scarcity and meet consumer demands, i.e., to direct resources to the employments most suited for satisfying consumers’ desires.” [2]

However, Smith identified three conditions that had to be met in order for the Invisible Hand to bless free enterprise with optimality. [3]

Firstly, markets must be subject to ‘perfect’ competition – meaning, no business can control prices. For this to be the case, each market must consist of numerous small firms, usually producing easily substitutable goods, and with few of them requiring any specialist skills to work for or to own. Then, if profits rise in some markets, resources can be shifted into them to increase competition and prevent the original profit-makers from controlling prices.

However, if costs fall as the scale of production increases, those first to expand can undersell their smaller competitors, and eventually control their markets, so ending any hope of perfect competition in them. And of course, most technological advances do allow more to be done with the same amount of land or labour, and so often does cause costs to fall with increased production. Thus, modern economies include many price-controlling, imperfectly competitive oligopolies.

But perfect competition also requires prices to act as market ‘signals’ that reflect competitors’ responses to consumer demand. For this to happen, the market must behave in an orderly, easily assessed, and fairly predictable fashion, thus allowing people to communicate their desires to it. This, in turn, requires people to behave rationally – not impulsively – to always fully consider and understand all options, and to be free of ignorance and uncertainty. Yet as long as things change, and especially as the rate of change continues to mount, people cannot know all their choices ― not unless their rationality more closely approximates precognition. In the absence of god-like foresight, even rational people bereft of impulsiveness can experience uncertainty, risk, or just plain ignorance about market opportunities, and so can “rationally react to the same sort of situation in different ways”. [4] In which case, prices do not act faithfully as clear market signals ultimately reflecting consumer demand, but simply as the chaotic end-product of market competition.

Given all these issues, Smith’s first condition for an Invisible Hand – perfect competition – can be rejected as unrealistic in the extreme.

But the second condition for an Invisible Hand requires more than simply perfect competition ― it must also be scrupulous. A sizeable requirement indeed, unless you have a tendency to believe in it beforehand. With that belief, you mightn’t even notice the circular reasoning: assuming scrupulousness effectively pre-ordains the end result claimed ― that competition provides optimal results. Meanwhile, in the real world, the obsessive-compulsive pursuit of profit and the inevitability of loss add to the pressures and stresses associated with competition, and so encourage abandonment of whatever moral restraint might operate.

Even if, for the sake of argument, we assume perfect and scrupulouscompetition, although prices might reflect consumer demand, still – and crucially – they need not express the relative urgency of needs. Producers may chase high prices, as the textbook suggests (more accurately, high profits) which reflect low supply and/or high demand, but because need is not demand unless backed up by money, producers can usually make more profits by ignoring the needs of the poor and kowtowing to the desires of the rich ― for example, by building opulent mansions for Forbes 500 members rather than houses for the needy.

But if even an impossibly scrupulous, perfectly competitive, pre-cognitively rational market results in a mixture of privilege and want, how can this be termed ‘optimal’? Indeed, to talk of optimality at all without defining it in terms of satisfaction of need (rather than of financially-backed demand) makes about as much sense as roller skates for squids. In the words of Thomas Balogh, a not so orthodox economist, if


“...relative profit opportunities could not express social urgencies… [then] the ‘best’ or most efficient production would become uncertain if not meaningless”. [5]

The failure of even impossibly perfect, scrupulous, and rational competition to guarantee optimality because of the difference between demand and need is related to Smith’s third and final condition for the Invisible Hand: that governments maintain defence, justice, public works, and other economic affairs which, though desirable, do not provide commercial competitors with much or any profit. Clearly, Smith’s original conception of the Invisible Hand claims ‘optimality’ only for a limited domain involving maximised profits ― elsewhere the market need not serve the community at all, let alone optimally.

Given that the assumptions necessary for its existence simply don’t hold, it’s not surprising that numerous economist luminaries (including Malthus, Ricardo, Keynes, and Marshall) have raised objections to the Invisible Hand. Even some textbooks admit that


“...the Invisible Hand is too good to be true! There are many ways in which things can go wrong. Indeed, a large portion of modern economic analysis has taken the form of exploration of conditions leading to failure of the theorem.” [6]

Some of that analysis not only earned Joseph Stiglitz a ‘Nobel’ prize, but forced him to conclude that


“...one of the reasons that the invisible hand may be invisible is that it is simply not there.” [7]

In fact, market competition creates not optimality, but a lottery. Markets cannot buy all goods produced for the profit-inclusive prices charged without going into more and more debt, so some goods must at some stage remain unsold, however efficiently they might be produced. Blind faith in an Invisible Hand might suggest that efficient producers will sell their goods, and the inefficient lose, but nothing guarantees this in the real world, where hands – visible or not – are often quicker than the eye. Efficient businesses can lose because of actions of more established, more powerful, yet less efficient competitors. Inefficient businesses can profit because of monopoly, oligopoly, a lack of more efficient competitors, or vapid fad.

And so, economic success need not follow necessarily from efficiency, discipline, skill, or any other advantage ― nor failure from their lack. The ideal that anyone with an idea and perseverance can prosper sounds enticing, but you can do everything right and still, if someone else does it with more luck, you will fail simply because not all can win.

What the Invisible Hand has mostly produced is a great deal of very visible ejaculate in the form of economic theory. Prices, rather than being accurate market signals which guarantee the most efficient use of resources and the most optimal of all possible economic outcomes, instead often hide costs, ignore effort, reward excess, mislead, delude, and compel social problems and ecological damage ― as a subsequent article will detail.

(Herman Royce is God Almighty’s biographer and self-appointed spokesperson, inventor of A Free Lunch, and the first person in history to say “Now I’ve seen you naked, I could never eat turkey.”)