Australia's history of racism and oppression must be fought against, with lessons to be learned from shifting paradigms around the world, writes Gerry Georgatos.

THE THEORISATION of race is the vehement behemoth borne not of ideology, but of the surrogate politics of exploitation. Racism is a tool for exploitation; for instance, more than 400 years of slavery in the Americas and millennia of wars and conquests all over our world where victors enslaved and/or indentured peoples lifelong without a reservoir of any dignities, but rather cesspools of humiliations.

Multitudes of peoples were ruthlessly diminished, denied the right to legacies of improved life circumstances to their children. Many were harrowed as chattel by “law”. Many were segregated and apartheid and eugenics reduced all of us to the lowest denominator, wounding us with hatred.

Some argue the lie of the haunting trauma of racism in terms of its intergenerational transmission. I argue denialists are not just complexified by guilt. I argue it is much worse than we presume and there is indeed intergenerational criminality of the oppressor. There is an entrenched divide of bad and good people, of the cruel and the cruelled.

"I can't breathe." Here, we see three words that pierced the hearts of black men and women across the globe.

There is increasing dissent to the suite of race theories, which many argue as the politics of identity. Where critical race discussions are denied, wholesale scholarly public examination withheld and hence an abrogation of postulations of the ways forward, we therefore remain hostage to the presumptive grimness of racial divides. The hostile resistance, the denial of the intergenerational criminalities of the oppressor, embed a seeming permanence of division and craft emblematic difference.

The hostile resistance to undertaking serious national conversations on racism through a full-blown multifactorial spectral range has been undermined into the narrowest corridor of discourse considered permissible by those hostile. A fervent observance, grounded in a firmament of strictures, of permanency of racism as entrenched appeals to the sensitivities and sensibilities of the oppressor.

Racism cannot and will not be extinguished by open arms, by hugs and by a spreading of love while the oppressor is steadfast recalcitrant. Racism can only be eradicated by equality alone, but not equality through words and laws but of uninterruptable deeds. Standing side by side – the oppressor and oppressed – is not equality.

As long there is an oppressor, there are the oppressed. The oppressor reduces the public dissemination of outrage to truncated public spectacles so to abrogate the potential for power-sharing, through the theatre of anti-discrimination-laden societal instruments and tools. We are often limited to retreating to the narrowest corridors of discourse in terms of the externalisation of otherwise internalised grief — for instance, through comedy, satire, theatre, books, activism and rallies. These are one-sided conversations and are compartmentalised. Without a national conversation – an ongoing conversation – poly-culturally membered, the racism divides remain chasms.

No nation which peddles a dominant culture is free from racism. If we deny the reflection of the demography of the nation in all its instruments, we embed power imbalances and therefore enable racism and other hotbed “-isms” — such as classism. Racism and classism are historically enmeshed. We are still not at an end with patriarchy, misogyny, sexism and ableism.

The war on racism seems never-ending. Its enemies dish symbolisms and superfluous undertakings while being bent on undermining equality by demanding assimilation and acculturation. We sell human rights as a universal truth and we domesticate laws with words such as “anti-discrimination”, but the intergenerational criminality of the oppressor flourishes. The majority of people diminished by racism comprise the majority of people living in the most crushing levels of poverty and within the most obscene, reprehensible socioeconomic stressors, in cesspools of deprivation borne of the historical oppressor and swirled maniacally by the contemporary oppressor.

What ability has the marginalised and impoverished to secure a just benefit from our nation’s anti-discrimination laws in calling out racism? None. How can we claim lonely laws selling the presumption of human rights and social justice will journey us to equality? The Australian nation’s anti-discrimination and anti-racism laws are nearing half a century old but relatively few have been defended by these laws.

At best, the laws are beggary, of how we should behave. They are about a right to equality, but they are not a promise of equality. For the majority, there is no access to voice and agency and for the few who can turn to these laws, there is an inability to navigate the powers within such perceived legal protections. It is argued that justice is natural, but I argue that there is no justice for the majority and justice is not natural but rather reserved for the sliver of humanity born into a manifest of privilege the majority are denied from before the very beginning of life.

When we truly wish to understand each other, only then will we begin to learn from the other and subsequently do away with the presumption of the other. Multiculturalism is a distinctly dangerous word signifying the intertwined and integrated whereas poly-cultural signifies many but not necessarily intertwined and integrated. Multicultural is layered and a pathway to the acculturated and assimilated – homogeneity – and therefore to the divinity of the oppressor, whereas poly-cultural is at best where we confront each other civilly and respect each other’s journeys and norms. Poly-cultural demands equality via power-sharing, whereas multicultural bows down to a quid pro quo, where the advantage is individuated in terms of the idioms and axioms of an oppressor who will not share power unless you conform akin. The history of the Australian nation in modernity is of a relentless firmament of testaments to its racism.

As long as we continue to deny the reflection of the demography of the Australian nation into a power-sharing equanimous translation, we will never understand the Cronulla riots, Islamophobia, xenophobia and misoxeny. There is a lesson to be learned from the victorious Democrats in the recent election in the United States of America. The USA remains a hotbed of racism and of classism. The United States, like Australia, sears a steadfast hold in its intergenerational criminalities and other transmissions by the oppressor, but ironically the Democrats did not win the Election on the back of the oppressor but through the pain of the oppressed.

More of the oppressed than ever before rose to an occasion to vote. Ninety per cent of the vote for the Republicans, to perpetuate the era of President Donald Trump, were what is argued as White voters. More White American women voted for Trump than ever before. The Democrat votes, which in real terms only just tipped the Republican votes, were near half comprised of Black and Brown and other non-White voters. More Latino-Americans voted than had ever voted before. More Asian-Americans voted.

The near-all of Black voters turned out for the Democrats. The majority of these voters live below or in proximity to the poverty line. The era of Trump was not put to an end by the educated classes, by the scholarly, by the big end of town, by the affluent. The era of Trump was put to an end by the oppressed, by those haunted by historical and contemporary racism. They did not vote for the promise of a better life, but to choose an oppressor who would perpetrate fewer burdens. However, the power of their vote does flicker hope of a way forward that sadly more than likely will never eventuate. 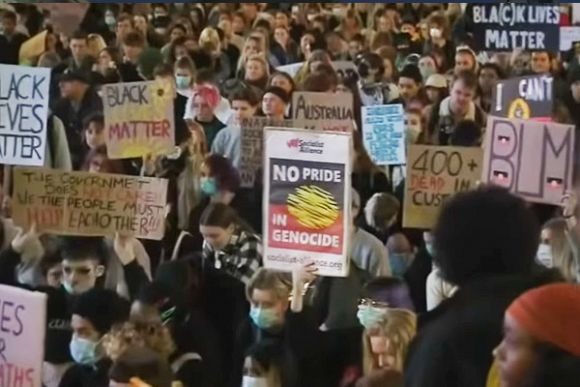 Racial tension overseas is serving as a wake-up call for other countries to recognise their own issues, including ours here in Australia.

The Australian nation, its oppressors, live in constant fear of the demography of the nation eventually raising its voice in demand of its poly-cultural identity rights and for a roadmap to equality through a genuine elimination or reduction of racism and classism by power-sharing. The muddle-minded oppressor, intoxicated by contemporary misunderstandings and definitions of racism and a desperate sense of urgency to acculturate and assimilate, who in panic deny many Black and Brown refugee status to this country, deny asylum to fleers from wars and civil strife, deny citizenship and social securities to hundreds of thousands on impermanent visas, glue crudely to a White Australia.

When they realise White Americans did not determine the outcome of the American Election, they will realise the day is coming when White Australians will not determine Australian elections. The Latino, the Black and the Asian determined who will govern the nation of America. The heart of the Australian nation remains imperilled of the racist. The Australian nation, still governed by a constitution ambled by racist rantings, crafted only several generations ago to fortify a White Australia, is only a quarter-century away from an end to the dominant White voting bloc.

The intergenerational criminality of the oppressor continues to keep hostage the Australian nation. Within a quarter of a century, the demography of the Australian nation will reflect more closely the demography of our world. For now, the racists of my generation, the majority of whom do not wear a public face to their racism continue to fill our parliaments and govern this nation.

Racism is an original sin, such as patriarchy and sexism and we are a long way from its universal dismantling. We can never give up, for even if the promise of equality never eventuates, in the struggle there is freedom.