I don’t want John and Bianca getting a conventional Australia education, learning the wrong things. I’d sooner have then taught by a governess. No, no, I don’t want to cut them off from the community; I agree they’re going to have to deal with it eventually. Perhaps I can send them to America to study under the right people, just as I wish now I had a chance to be taught by Milton Friedman, or Dr Teller …

…  but whatever I do, the House of Hancock, as you once called it, comes first. Nothing will stand in the way of that. Nothing.

Gina might now be regretting her decision to send daughter Bianca Rinehart to a U.S. military school instead of tutelage by that nice Mr Friedman.

In November last year Ms [Bianca] Rinehart gave a rare interview to Australian Vogue which featured an eight-page photo shoot of the glamorous heiress donning designer gowns with the rugged, red landscape of the Pilbara as the background.

She spoke of being sent off to military school in the United States at age eight:

"I was eight, it was so far from home, you know, it was in Culver, Indiana, so no, it wasn't one of my favourite experiences."

Because Bianca has now dragged her mum into court in what is known as Rinehart v Rinehart [2018] NSWSC 1102.

Bianca and her brother are beneficiaries of the Hope Margaret Hancock Trust, which owns 23.4% of Gina’s vast mining company, Hancock Prospecting. Bianca, maybe motivated by her Culver experiences, wrested control of this $5 billion Trust in 2015 from Gina’s hard Pilbara-encrusted hands.

This was a full-scale blue, as you can imagine and as the Sydney Morning Herald reported on 28 May 2015:

‘Justice Brereton said Mrs Rinehart had gone to extraordinary lengths to maintain control, either directly or indirectly of the trust, and had exerted "enormous pressure and great influence to do so".’

Bianca, possibly with U.S.-trained military precision, then went through the books and ‒ surprise, surprise! ‒ it looked like the Trust’s inflow pipe from Hancock Prospecting Pty Ltd might have been squeezed. Intentionally.

Knowing her mum as she does, Bianca took Gina to court to sort it out. On 5 and 6 July 2018, the matter was heard before Her Honour Justice Julie Ward in the Equity Division of the NSW Supreme Court.

Can we say, on behalf of all curious onlookers, “thank you, Bianca”, because her actions have unearthed information that might yet prove unsettling to some on the entitled Right.

According to Justice Ward:

Relevantly, for present purposes, it is alleged that Gina breached her duties as a director by exercising her powers and/or duties as a director or officer of HPPL [Hancock Prospecting Pty Ltd] to cause HPPL to enter into contracts and to pay out its corporate funds: otherwise than in good faith in the best interests of HPPL as a whole; improperly to gain an advantage for herself; improperly to cause a detriment to HPPL; other than for a proper purpose; and without the degree of care and diligence that a reasonable person would exercise if he or she was a director or officer of HPPL in HPPL’s circumstances and held the offices and had the responsibilities that Gina had.

Bianca wanted to know why Gina had seen fit to donate money to causes like, for example, the Institute of Public Affairs.

“You would never know that by looking at those yearly financial statements, though. They contain no hint of the extent to which the so-called think tank is dependent on a single donor. Indeed, they seem to hide the fact.” https://t.co/CHR75UQKCs

In the schedule of HPPL donations and sponsorships provided to Bianca’s solicitors, it is disclosed that HPPL paid or provided amounts to IPA in a total of $2.3 million for the 2016 financial year and $2.2 million in the 2017 financial year. The annual reports of IPA for those years do not mention HPPL as a donor and the figures set out in the reports record that the vast majority of donations were received from individuals. Bianca submits that the inference to be drawn therefrom is that Gina herself has been credited by IPA for HPPL’s donations. Bianca also points to the fact that IPA has not answered Bianca’s queries as to how HPPL’s donations have been used.

THE INSTITUTE OF PUBLIC AFFAIRS SCAM 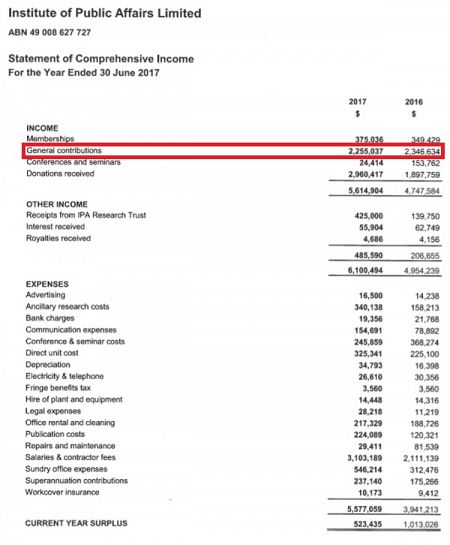 Thus far, we have not received any response from Mulholland or anyone else at the IPA.

An analysis of the numbers reveals some interesting details, however.

In 2016, according to the Court documents, Hancock Prospecting Pty Ltd (HPPL) paid the IPA $2.3 million. According to the IPA’s 2016 ASIC financials, the total sum received in General Contributions was $2.34 million.

In 2017, NSW Supreme Court documents reveal HPPL funding the IPA to the tune of $2.2 million. In the same year, the IPA recorded General Contributions of $2.25 million.

In other words, with rounding, these are the identical numbers for both years.

Unless this is a remarkable coincidence, it would appear the IPA have a special accounting category for payments from Gina Rinehart’s mega-mining corporation.

But why would they do that?

One reason might be that the contributions from HPPL to the IPA are not, in fact, donations, but payments for services rendered. Under Australian tax law, donations (giving without the expectation of receiving anything in return) do not attract goods and services tax (GST), whereas payments for services do. Thus, if the IPA are being paid by Rinehart to perform specific tasks and projects, the IPA will need to pay GST on those receipts. It should be noted that the IPA is Australia’s most prominent purveyor of climate change misinformation and fake science and Gina Rinehart is the nation’s dominant fossil fuel magnate.

Even more concerning, as alluded to by Judge Ward, it seems as if the IPA has misled the public about the sources of its revenue in at least its last two published annual reports.

For instance, in 2017, the IPA reported gross revenue of $6.1m, yet claimed that only 1% of this income came from business sources.

Note the following graphs published on page 15 of the IPA’s 2016/17 Annual and Financial Report: 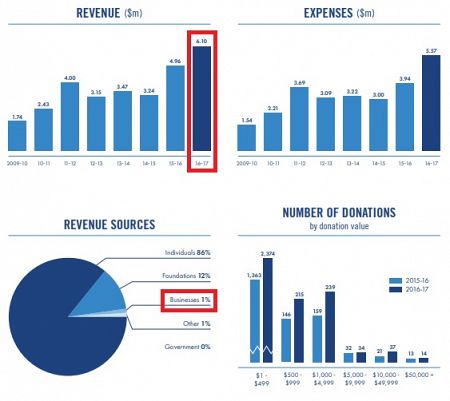 However, if Hancock Prospecting Pty Ltd kicked in $2.25m, as stated in the Court documents, one specific business contributed 37% ‒ more than one third ‒ of total IPA revenue. 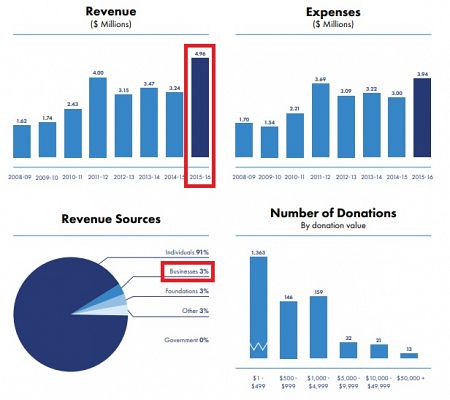 No wonder the IPA appointed Gina Rinehart a life member.

Georgina Downer hears no evil and sees no evil. Rinehart received life membership of the IPA after shelling out nearly $5m over two years. Wouldn't be a person in the IPA that didn't know about it #thedrum pic.twitter.com/Im5j65uW49

Without Gina’s backing, the IPA would be deeply in the red. It is crystal clear the organisation’s claims of being thrust to the forefront of Australian public life on the back of thousands of small members and contributors is a total fabrication. The truth is, Rinehart, through Hancock Prospecting, is the major shareholder of the IPA.

This is despite the IPA enjoying what is known as DGR (Deductible Gift Recipient status), authorised by the ATO so that every donation is tax deductible for the donor. DGR does not, however, allow any other perks and the holder of DGR status is obliged to pay all relevant taxes – including GST and corporate tax ‒ in the usual way.

So, thinking outside the square, the IPA registered a charity (with all the associated tax benefits) called the IPA Research Trust. The Trust has no employees, just 5 volunteers, but receives large sums in donations and bequests — $627,060 in 2016-17. In that same year, the IPA extracted $425,000 as revenue from the Trust — about two thirds of its total revenue. 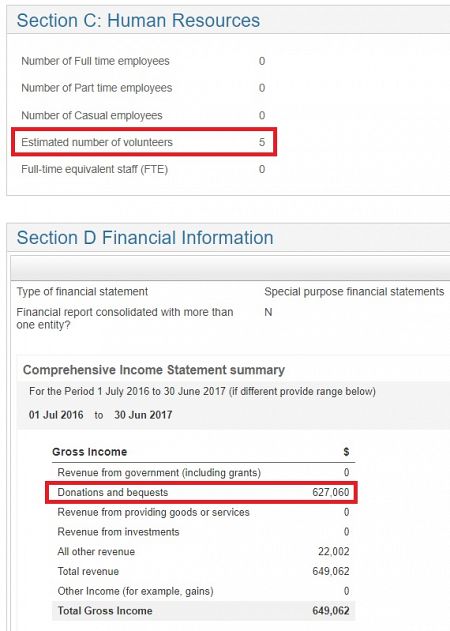 In other words, a massive amount of money went tax-free into the IPA Trust then $425,000 popped out and went straight into IPA coffers.

IA has been digging around charity legalities generally and there will be more on these rorts, but for now it seems to us the so-called research projects the IPA Trust relies on for its charitable status might not meet everyone’s standards for “scientific research”, as required by tax legislation.

It appears that Gina Rinehart and the IPA have numerous questions to answer. 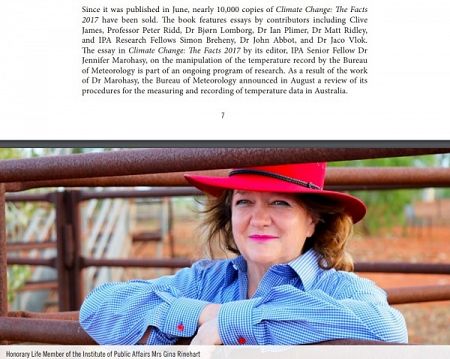 Screenshot of the end of page 7 and the beginning of page 8 of the IPA Annual Report 2016-17. Can you see any connection?

This editorial was originally published in our weekly subscriber only newsletter and in the IA members only area. But this is only part of the story.

John Roskam of the IPA has emailed me to say that he was not "browbeating" me. Maybe that's not the right word, but I do find the whole episode a bit out of the ordinary. As per his invitation, here is the email chain in case you're curious https://t.co/rRoHkxmQkk https://t.co/HMlOdzDEUP