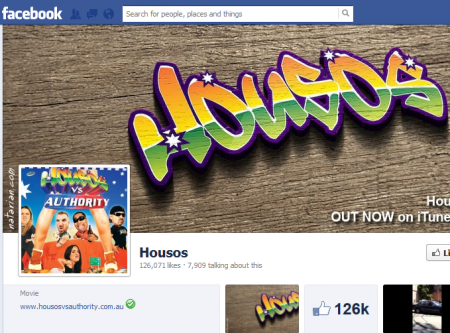 It’s vulgar, politically incorrect and, at times, a harrowingly honest look at life in Sydney’s low-income housing areas. Housos, the latest SBS comedy from Fat Pizza creator Paul Fenech, has divided both critics and the general public (even Today Tonight and A Current Affair have been torn with the former calling it ‘degraded’ and the latter hailing the ‘edgy’ comedy).

The show is unashamedly crass as it parodies the lives of public housing occupants, who are portrayed as lazy, petty criminals, welfare cheats and neglectful parents. Nevertheless, there are a legion of passionate Housos fans who claim the show highlights the realities of a society fractured by deep economic divisions.

Housos has certainly been a commercial success, with two television seasons, a stage show and a feature movie — Housos vs Authority. Although combating authority has been a recurring theme ‒ be it the police, Centrelink, or politicians ‒ the show has been largely neutral regarding partisan politics. Relying ultimately on government money through SBS, this should come as no surprise. The official Housos Facebook page, however, has proved an effective outlet for degrading, misogynist attacks on the Prime Minister, Julia Gillard.

It is not clear who the administrators of the Housos Facebook page are, but their political affinity is crystal clear. Far from acting as moderators, deleting inappropriate comments and censuring repeat offenders, the administrators orchestratepersonal attacks and provide a safe space for the most feral and sexist comments. Objections are brushed aside and objectors are subjected to similar abuse.

There are too many examples to cite, but a brief perusal of the Facebook wall makes the Housos political stance evident. On 8 February, the page posted a picture of Gillard in flames which received hundreds of likes: 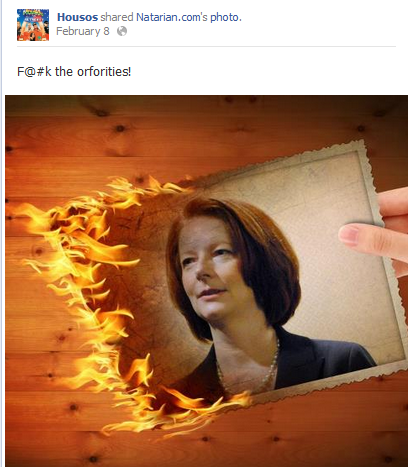 Later that day, the status asked:

The comments overwhelmingly stated it was Gillard. Anthony Mundine, who had fought a few days earlier, and Tony Abbott also received several nominations.

Earlier in the year, a status read:

gonna thong the fuk out of sum c*nt

Again, the comments were filled with anti-Gillard hate. One even contained a death threat that was not reported or deleted — indeed it received several likes:

fucking Ginger bitch julia, taking money off us & our defence force, & giving it to other countries & fucking illegal boat people,i cant pay my rent & feed my kids on $225.50 a fortnight gimme a gun & a ticket & i’ll shoot the bitch, yep ill go to jail but ill have food n a roof over my head & me kids will be housed & fed cos they’ll be in the welfare system. 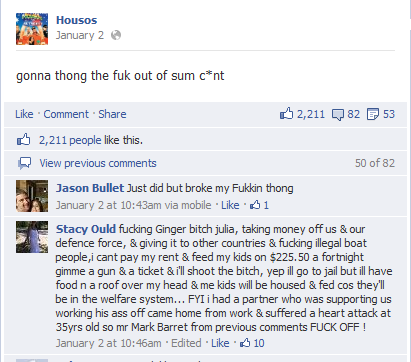 Seemingly buoyed by the chance to attack the Prime Minister with impunity, the statuses and comments became increasingly vile throughout the year. In response to Gillard’s recent visit to West Sydney the administrators claimed:

Even the PM watches Housos!! Where else did she get the idea of living in Rooty Hill for a week to mix it up with the locals?? What a plagiarising stooge! Someone go thong slap the bitch. 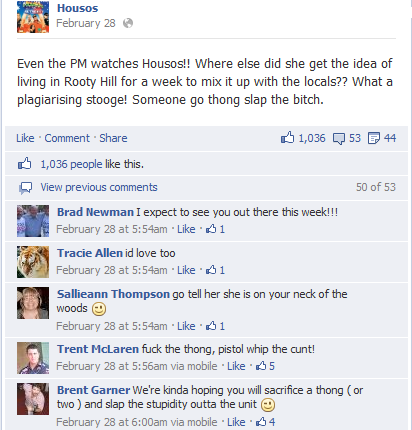 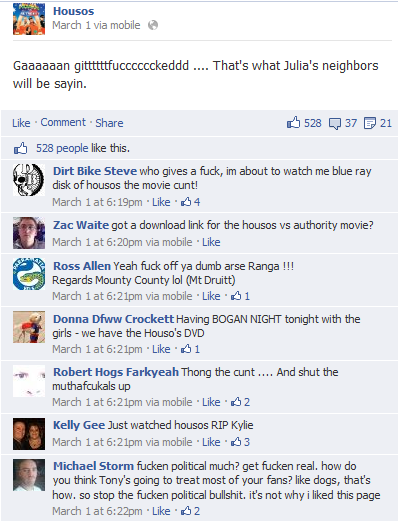 The commentators tried to outdo each other for vulgarity, misogyny and sheer meanness. One wrote:

while another brain had this to add:

get back in ur kennel lmfao

Egged on by the administrators, comments on more recent statuses include:

Don’t worry houseos your to good for that Ranga rat ill thong that bitch any day’, ‘Julia Gillard sucks dick! 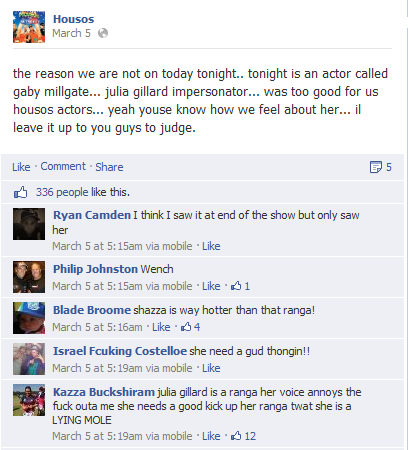 Some fans do highlight the irony of supposed housing development occupants championing a Liberal government. One commented:

how do you think Tony’s going to treat most of your fans? like dogs, that’s how. so stop the fucken political bullshit

The administrators had this reply to those who complain:

to all the haters …. And critical pricks… kiss my ass

It was obvious who they had in mind. Comments included:

I’m Sure Gillard will stick it out for thongin!!

The glaring question is why?

There is no ready answer. Everything about Paul Fenech’s career and work hitherto suggests he is either apolitical or sympathetic to the political left. What is the motivation for these vile and sexist attacks on the Prime Minister? Is it possible he is completely ignorant of his own Facebook page? If not, why would he want to provide a safe place for comments that would be deleted from all but the most vicious right wing blogs?

It will be a gruelling six months for the government as it prepares for the September election in the face of persistently negative polls and a hostile mainstream media. Gillard, however, appears to be facing a war on two fronts. She must not only endure the trials common to all world leaders, she must also endure the tasteless sexism from a noisy minority who still cannot abide a female prime minister.

Gillard is not a perfect leader and she has not led a perfect government. She deserves the full scrutiny of the media and the public for her political performance. She does not deserve the gendered and sexualised language directed at her. To use the vernacular, Paul Fenech and the administrators of the Housos Facebook page deserve a good thongin.