The ironically named Verity Barton has committed several illegal acts while serving as a Queensland MP, about which she has provided inadequate explanations to the electorate Alex McKean says she should come clean or resign. 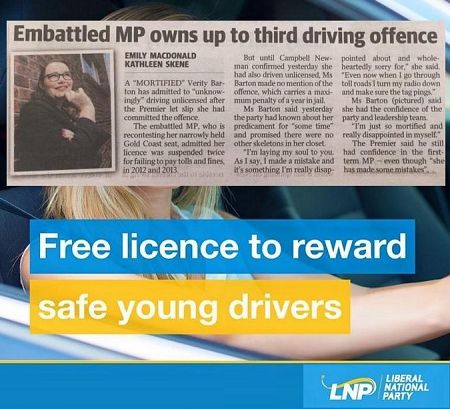 THE DEFINITION of the word ‘verity’ includes:

‘a true principle or belief, especially one of fundamental importance’.

Truth has become a rare commodity in Queensland political life. The fundamental principle underlying the activities of the Newman Government appears to be that the interests of political donors override all other considerations, whether of good governance, the rule of law, transparency, accountability, or the protection of the uniquely beautiful environment of this State.

On those occasions when the truth has emerged, it has commonly been the consequence of some internecine conflict within the governing regime. Dr Chris Davis, former LNP MP for Stafford, has been engaged in a program of truth-telling about the activities of Newman and Co. since he was thrown out of the Parliament for daring to stand up for his constituents, and principles of accountability in government, against the iron rule of the premier.

The political career of Dr Davis appears to have been terminated by his courageous refusal to sell out his electorate and principles.

All of those in the LNP without the ticker to emulate Dr Davis now await the wages of their cowardice and inability to stand up for the people of Queensland against the dictates of the donors.

The only question is whether the swing against the LNP will be the 18.6% seen in Stafford, or the more modest swings heralded by recent polls.

An internal power-struggle appears to have been the undoing of the accidental LNP representative for Broadwater, Ms Verity Barton. Reports mid-way through 2013 indicated that senior LNP figures on the Gold Coast were compiling a "dirt file" on Ms Barton to prevent her from contesting the current election.

These reports appear to have had some basis, with recent revelations, in the run-up to the 31 January poll, that Ms Barton has, on two separate occasions in the last few years, had her license suspended for failure to pay tolls.

Whatever the source of, or motivations for, the release of, this information, Ms Barton’s reactions have fallen a long way short of what the public are entitled to expect of one of their representatives. Ms Barton has provided no explanation for her repeated oversights, nor for the revelations only coming to light after considerable delay.

In a more startling revelation, Premier Campbell Newman has told the media that Ms Barton drove at times when her license was suspended.

Even more alarming, given the widespread concern about the politicisation of the Queensland Police Service under the Newman Government, is the news that the investigation into whether Ms Barton has committed a criminal offence has been removed from the Gold Coast traffic branch and placed with an traffic inspector in Brisbane.

In the statement Ms Barton issued owning up her license having been suspended – twice – no acknowledgement was made that she had also committed the offence of driving without a license.

Ms Barton has been at pains to avoid being asked questions about these issues and is reported to have submarined behind the counter at her electorate office when the media showed up.

Verity Barton has not always been so retiring, using social media platforms to provide an insight into her true views, describing passengers on public transport as ‘icky’, voters as ‘bogans’ and saying that all parents should not receive any welfare payments.

This information, as well as photographs of Ms Barton’s car being parked in a disabled space, appears to have been leaked by Ms Barton’s enemies within her own party.

Helpfully, considering her current silence, Ms Barton has previously made public statements from which it is possible to discern, at least to some extent, her views on illegal behaviour in general and driving offences in particular.

Hansard shows that on 15 October 2013 Ms Barton rose in the House and said:

"If you have done nothing wrong, you have nothing to fear. There is just as much chance of me being pulled over for an RBT in my electorate as I am driving past one of the schools, as there is of me driving past a speed camera van, as there is of me being pulled over for a random roadworthy check. It is part of being a driver on our roads. If you want to drive on our roads, you need to accept that there are some responsibilities that come with your licence."

On 5 August 2014, Ms Barton was part of the Legal Affairs and Community Safety Committee (LACSC), which was examining the ‘anti-hooning’ legislation.

"One of the things that is often said to first-year law students when they are doing their introduction to law subject is that one of the most important things about justice is that it must be seen to be done."

Indeed, it is a fundamental principle that justice be seen to be done.

In this particular case, the demands of justice would appear to be that Ms Barton provide a detailed account of for precisely what reasons her license was suspended, for what periods of time, each occasion when she drove when not entitled to do so and what particular steps she has taken to ensure there be no further recidivism.

Given the revelations of illegal activities, and Ms Barton’s statements on Hansard about the privileges adhering to a driver’s licence, Ms Barton should also issue an updated and more fulsome apology — the initial statement having made no reference to her driving while disqualified. This should occur where the media have an opportunity to ask questions of her, rather than by way of a prepared statement.

If Ms Barton is not prepared to take these steps, she should resign immediately.