Here we Joh again! Jarrod Bleijie and the Joke revisited

RECENT REVELATIONS of Gold Coast betting scams with links to former and current senior police have sinister overtones for those who remember the history of police and political corruption in this State.

The allegations have led to a further unraveling of the narrative the LNP has desperately trying to sell around crime and the safety and security of Queenslanders.

The Attorney-General, Jarrod Bleijie, has once again found himself mired in controversy and the Premier has again been forced to defend his unpopular right-hand man. Now the investigation has been referred to the Crime and Corruption Commission (CCC), serious questions arise about the competence of the current head of the corruption watchdog to properly investigate the matter.

Phil Dickie’s seminal work The Road to Fitzgerald and beyond set out in painstaking detail the personalities and dynamics behind police and political corruption in Queensland, referred to as ‘the Joke’, leading up to the Fitzgerald Inquiry. 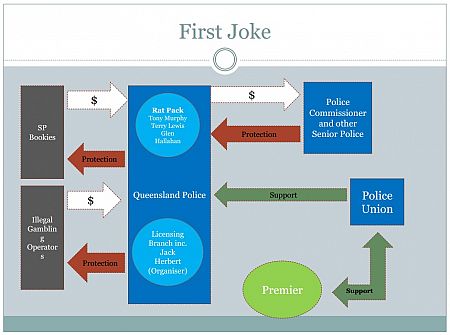 Dickie worked for the Courier Mail — then a very different type of news organ whose leadership fearlessly exposed corruption in this State, instead of adopting a supine pose, whenever they are not acting as cheerleaders for the Newman regime.

Dickie and Chris Masters of the ABC’s Four Corners, reported that certain easily detectable criminal enterprises were flourishing, apparently as a consequence of their operations being protected by police.

The repeated denials of police and government figures that such activities could be taking place appeared increasingly ridiculous as reporters were able to easily uncover the illegal gambling dens and brothels the police said they could not find and the politicians said did not exist.

Along with tenacious investigative journalism, the eventual exposure of ‘the Joke’ depended on the courage of several former members of the police. These extraordinary individuals were willing to recount experiences of being offered bribes, or being told by senior officers that investigations into certain individuals should not be proceeded with.

It now appears corruption has continued to flourish on the Gold Coast, with many of the same elements being present. Again, gambling is involved, as is the suggestion that police and politicians have conspired to protect the illegal enterprise.

Allegations have recently been aired on the ABC 7.30 involving a former police officer running betting software scams using a variety of fronts on the Gold Coast:

Mick Featherstone, a former fraud squad detective and head of the Surfers Paradise CIB, is reported to have continuing links to senior police officers on the Gold Coast.

The controversial Acting Chair of the CCC, Dr Ken Levy, is now said to have a personal involvement in the investigation into not only Featherstone’s activities, but also his connections to those senior police officers.

Ian Leavers, president of the Queensland Police Union, has publicly declared that claims of police involvement in the scams will be found to be ‘baseless’, while at the same time saying he is not aware of any of the details of the individual under investigation.

It is difficult to see how Mr Leavers can express this degree of certainty about the outcome of the continuing CCC investigation, given the history of police corruption in this State. It is also difficult to share Mr Leavers’ faith in the (unnamed) officers who are currently under investigation.

Now the trouble-prone Attorney-General has been drawn into the fray.

On the most recent occasion when there were public calls for Mr Bleijie to resign, in the wake of the Stafford by-election catastrophe, Premier Campbell Newman backflipped on some of the boy A-G’s dimmer thought-bubbles, defending his bumbling ‘Boy Wonder’ sidekick by declaring that Bleijie had been responsible for a 15 to 30% drop in crime across Queensland.

The Premier appeared to take the view that the mendacity, incompetence and breaching of confidences, which have combined to put the bar, the bench and the voters of Stafford and elsewhere offside, can all be forgiven by reason of the Bleijie’s credentials as a crime-fighter extraordinaire.

One can only wonder what the police minister’s thoughts were at hearing that Bleijie was to take the credit for the (inaccurate and very inflated) vaunted reduction in crime throughout the State.

But now it appears ‘Robin’ is not really all that flash in the crime-fighting stakes either. It has emerged that the betting software scams on the Gold Coast were brought to the attention of the attorney-general some months prior to the ABC breaking the story.

Back in June 2014, a victim of one of the scams wrote to his local MP, who duly passed the inquiry on to Bleijie, as the Minister responsible for the Office of Fair Trading (OFT). Bleijie wrote back to the constituent, saying it was not possible for him or the OFT to intervene in the matter.

Bleijie now claims he said he could not help because there was no power for the OFT to compensate the victim for his losses. The victim however says he simply wanted the authorities to act to avoid other people being victimised.

It seems clear that power to investigate the complaint did exist.

The Fair Trading Commissioner, who operates under the direction of the Attorney-General, has the function (under s11(e) of the Fair Trading Act 1989 (Qld)) of investigating

‘… fraudulent or deceptive practices in relation to matters that affect or are likely to affect the interests of consumers.’

In conducting an investigation, inspectors employed by the Commissioner have broad powers (s89) of entry to premises, searching and seizure of items found on premises. Inspectors also have the power (s90) to require persons to provide information or records.

None of these powers were exercised.

The OFT publishes a document entitled Compliance and enforcement policy and standards, dated 2013.

‘OFT is committed to deterring, detecting and remedying improper practices that have the potential to cause serious detriment or inconvenience to consumers and the marketplace.’

The OFT website has pages for warning about Scams targeting Queenslanders and for naming and shaming Businesses and traders to avoid. But there is no reference to the scams run by Mr Featherstone, or the companies associated with those scams on the pages.

Premier Newman, when called on to defend Mr Bleijie’s failure to respond to the complaint, contradicted his earlier boosting of Bleijie as a crime-fighter, saying it was not the Attorney-General’s job to investigate serious crime or fraud and it was more appropriate for the police or CCC to do so.

This response appears to ignore the existence of the major investigations unit of the OFT, which the OFT website says handles large-scale investigations that involve serious misconduct that causes large-scale loss for consumers and suggest that a business is repeatedly offending.

The question then is: was the Attorney-General unaware of the powers possessed by the OFT when he duck-shoved the complaint by a concerned constituent?

Perhaps he was too busy dealing with the ever-present threat of ‘vicious lawless’ bikies and shutting down tattoo parlours to bother turning over a few rocks to find scammers who are ripping off millions in Queenslanders’ life savings?

Now the matter is apparently being dealt with personally by another of Bleijie’s outstanding success stories, Dr Ken Levy. Interestingly, Dr Levy will be investigating alleged links between Featherstone and ‘senior police’ at the same time as the police commissioner is investigating whether Dr Levy has deliberately misled Parliament — an offence attracting a 7-year prison sentence.

The police commissioner himself has come under fire for backsliding into the pre-Fitzgerald era practice of police publicly trumpeting apparently positive crime statistics in the days leading up to the Stafford by-election.

In an example of blowback reminiscent of the ICAC carnage currently taking place in the NSW Liberals, it appears links between the betting scams and senior police were uncovered during the course of Taskforce Maxima, which was set up to investigate illegal activities of bikies on the Gold Coast.

It is interesting that Dr Ken Levy, when giving evidence to the Parliamentary Crime and Misconduct Committee (PCMC), which has led to the police investigation into whether he misled Parliament, referred to the fact that when he originally spoke to Des Houghton at the Courier Mail, he said Mr Hougton had been interested in talking about links between bikies and police on the Gold Coast. 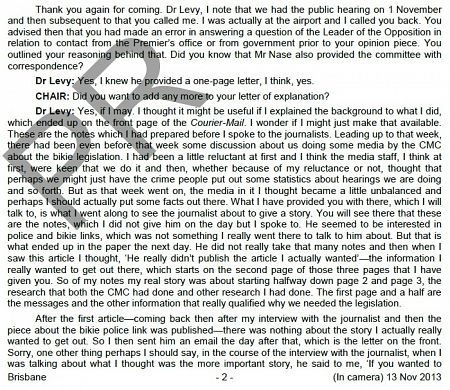 When an article on that topic was published the next day, Dr Levy penned his notorious opinion piece, backing the Newman government crackdown on bikies.

Mr Lee Anderson, Newman’s chief media adviser, gave evidence to the PCMC on 18 November 2013 about a face-to-face meeting with Dr Levy on level 15 of the executive building, which Dr Levy had never revealed to the PCMC in any of his evidence.

Mr Anderson said he advised Dr Levy not to be drawn into any line of questioning from Des Hougton he felt uncomfortable with. 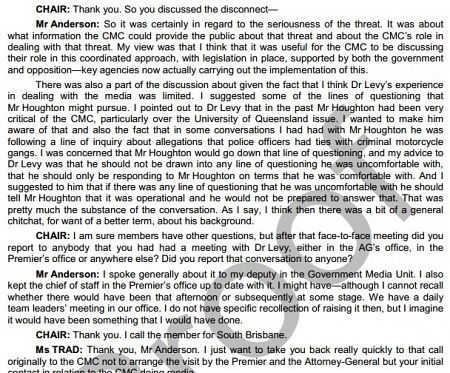 This included a line of inquiry Mr Houghton had apparently been pursuing about links between bikies and police. Mr Anderson advised Dr Levy he should respond to such questioning by saying the matters were operational and he was not prepared to answer.

Given the significant doubts about the independence of each of the Police Commissioner and Dr Levy, the public might have more confidence in an investigation being conducted by a chair of the CCC who actually holds bipartisan support, as promised by Premier Newman in the washup of the Stafford bloodbath.

It appears more certain each day that this government is staggering toward a conga-line of brickbats in the election due early next year. One of the consequences of an electoral drubbing, it is to be hoped, will be a public examination of the corruption that this Government has allowed to flourish throughout the State during their short reign.

Newman, Bleijie and their cronies have squandered the sacrifice of those courageous few who broke ranks and told the truth about ‘the Joke’ to the Fitzgerald Inquiry. It seems a new generation of whistleblowers will have to find the courage to stand up and expose the ‘the Joke’s’ new manifestations which are now flourishing in Queensland.