What does a Bjelke-Petersen-spawn Government do when hospital waiting lists double in the two years it's been in office? It airbrushes them out of existence — with the helpful aid of its media cronies. Steve Bishop reports.

THE NEWMAN GOVERNMENT is panicking about the fact that it has been responsible for the waiting list to get on the waiting list for health procedures nearly doubling since it came to power. Its internal polling will have told it that people are planning to change their votes because of this failure.

Hence, a flurry of recent announcements and an expensive advertising blitz telling Queenslanders that if they actually manage to get on a waiting list for surgery they will be operated on within the recommended time.

Already suffering a backlash over their “Wrong Choices” decision to hand public assets to private enterprise, the Government is doing its utmost to convince Queenslanders that its snake-oil, cure-all quackery has resulted in the miraculous disappearance of waiting lists.

Is this why a paragraph in Murdoch’s Queensland Sunday Mail of November 23 mentioning the appalling figure of 411,283 Queenslanders waiting for treatment was cut from the paper’s website — a paragraphectomy?

More on this later.

The Government’s main problem when it comes to health is that nearly 10 per cent of Queenslanders are likely to be contradicting its spin doctors.

There are 4.75 million people living in Queensland and 411,283 of them are on Health Department waiting lists.

The 411,283 suffering people have extended families and every time the talk in those family circles turns to the health system, the plight of poor old uncle Arthur or cousin Zena is mentioned.

It’s the same with workmates, with book clubs, with sports clubs, with all sorts of social interactions. Even without the internet the discontent about waiting times is spread by word of mouth.

Internal polling will have confirmed to the Newman Government it is losing the battle.

Lololololol. There will be some very nervous folk in LNP head office today. #qldpol pic.twitter.com/yzhPqatGRj

Hence recent claims, such as waiting lists being independently audited and a guarantee that most urgent operations will be carried out in the recommended time.

But networks such as Facebook and Twitter mean that every time the Newman Government boasts it has fixed waiting lists and waiting times, there are tens of thousands of people in pain or whose lives have become restricted who become angered and dispute those claims.

So, this is a battle the Government cannot win. Worse, it shoots itself in the foot every time its spin doctors make a new claim, firing up anger all over again.

Take, for example, some of the comments sent to the Brisbane Times after just one recent story that waiting lists were the lowest ever.

Waiting years for a hernia:

'I only have 2.5 years to go on a 3 year wait for a basic hernia operation. Springborg is as incompetent as the rest of this woeful government.'

Waiting to more than a year just to get onto a waiting list:

'My daughter has waited for over twelve months to get ONTO a waiting list of people needing to see an ENT specialist.'

It's all very nice to begin with ... then nothing:

'I am one of these "people" waiting to get on the list. After consulting my GP, who forwarded my health issue & details to Qld Health, l was pleasently suprised to receive a reply within 7days. This letter stated that status would be assessed & l would be notified accordingly. l have not to date had any further communication from Q Health & that was in excess of 2 years ago.' 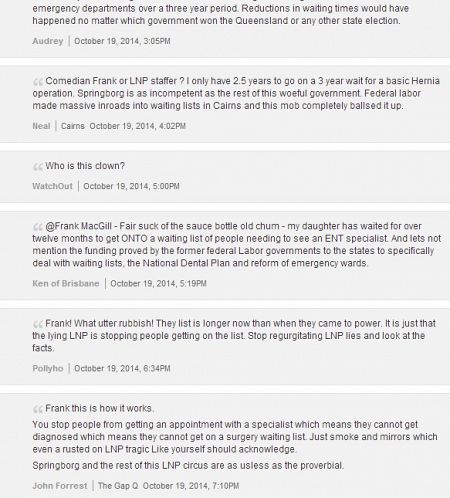 '…can you tell me if my cervical cancer has magically disappeared without me being notified so I no longer require the surgery that I've been waiting over a year since diagnosed?'

Maybe if you wait long enough people will either die or pay for the surgery themselves:

'After 3 years waiting to see a urologist I was diagnosed with prostate cancer. Had to pay for myself.'

From 90 days to see a specialist under Labor to still waiting after a year under Newman:

'I work in health care and i have been waiting a year to see an eye specialist . As a category 2 type patient I would have waited 90 days under the ALP government to be seen. Currently I have waited a year.'

The Government is extremely sensitive to the voter backlash about waiting times because it is responsible for the waiting list to get on a waiting list nearly doubling in less than three years.

That was six weeks before the Newman Government came to power.

So the Government wanted maximum exposure on its latest announcement about waiting lists — the guarantee that any urgent operation will be carried out within the recommended time. Multiple, expensive advertising spots were booked with television channels, starting on Sunday 23 November.

Instead of the announcement being made at a media conference, with the result that news editors might not give it the priority treatment the Government hoped for, the Government arranged for the story to appear exclusively on the front page of the Sunday Mail which has the state’s largest readership. It then released the story to other media outlets.

The Government would not have been happy with the fact that towards the end of the Sunday Mail story there was a paragraph which read:

'However, the guarantee comes as the number of patients seeking appointments with specialists – the "waiting list to get on the waiting list" – jumped by 27 per cent to 411,283 at the end of 2013-14.'

The entire story also appeared on The Courier-Mail website that day.

Note the below comparison, with the missing paragraph highlighted: 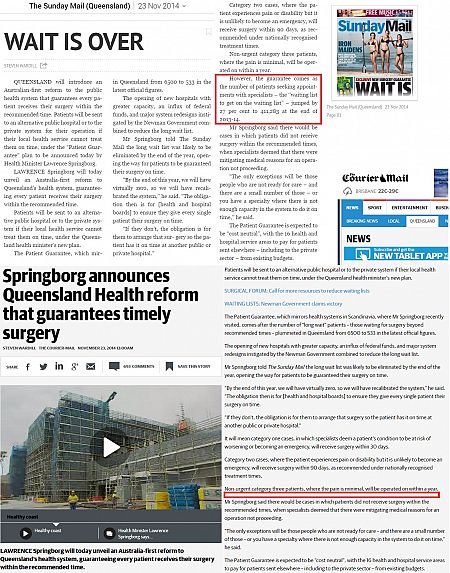 The Courier-Mail covers up for Campbell: Sunday Mail print text (top) obtained via pressreader.com and internet version via couriermail.com

What verb should be used — edited, removed, deleted, excised, censored?

I have asked the newspaper:

Why was that paragraph deleted?

Did the decision to remove it come after an approach of any sort from the Queensland Health Minister, his office or the Department?

How often are stories on The Courier-Mail website altered without this being made clear to readers?

I have yet to receive a response.

In Queensland, doctors refer people onto hospital waiting lists and politicians take them off http://t.co/Lze5xtdzUs