A zombie fixated on fraud.

Here are some previous death notices:

One Nation would never again be a credible force in politics and now existed only in the minds of a handful of "lonely" people who were "clinging to a cadaver", the party's co-founder said yesterday.

David Ettridge, who is no longer connected to the party, said the organisation he founded with Pauline Hanson was dead.

And for a while, it looked like Ettridge was right. But, like the claw on the Terminator, a little bit of One Nation kept twitching, kept on life-support by the likes of former treasurer Ian Nelson, who proudly announces to anyone who’ll listen that it was he who kept the One Nation flame alive during the "dark years" of (former Labor prime ministers) Gillard and Rudd.

Nelson also says it was he who bought Pauline back into the fold; it was his idea to rename the entity "Pauline Hanson’s One Nation Party"; and it was his acceptance of a deal, too good to be true, which allowed James Ashby to make his move on Pauline.

"Is that Ian Nelson, treasurer of One Nation?

“James Ashby here, Black Bull Printing. I have been reading about you in the Beerwah Gazette and I think you are grouse. I would like to offer to do all your printing for you at cost, save you a fortune. Whaddaya reckon?”

“'Course, I’d like to meet Pauline when I drop stuff off, just to be polite. Whaddaya reckon?”

“Tomorrow work for you? Whaddaya reckon?”

Even after the fiascos of Senators Cullerton and Anning, even after the electoral debacles in WA and Queensland, things were sort of okay.

They were contenders, weren’t they? An unassailable bloc of three ready to stick it to the Man on tax. Power, baby!

Then the inevitable, the thing everyone has seen coming since James met Pauline: the implosion.

Ashbygate readers will know James attracts "issues" like normal men attract mosquitoes. The thing is, he has an uncanny ability, almost a superpower, to get the mozzies to ignore him and suck every other poor bastard dry.

This latest implosion involves the pompous buffoon and One Nation Senator for NSW, Brian Burston.

Here is where we descend into soap opera. It seems Brian, possibly for manly reasons, wanted to go with the man – in this case, Finance Minister Cormann – regarding profligate corporate tax cuts. Pauline, presumably guided by James, did not.

So Burston – who is clearly a weird dude – either made or had someone make for him, an approach to the NSW Shooters, Fishers and Farmers Party to become their Senate gun in Canberra. Shooter’s head, Robert Borsak, who has no hesitation in blowing the head off an eland, thought it a stupid idea.

But Pauline was apparently downwind of the circulating gossip.

In an Ashby masterstroke, Pauline waited until the traitor Burston was live on radio in his home State before trying to make him slip on the soap:

Ben Fordham: “Do you want me to read it to you?”

Ben Fordham [reads]: "I no longer have confidence in you as an officer of Pauline Hanson’s One Nation. You have been removed as deputy registered officer in NSW and in the Federal party."

Brian, being a man terribly out of his depth, just blustered. And called Pauline childish, which is probably fair.

Then Ashby got Pauline a gig on Sky News, where she vented against Burston. Sky claimed Pauline "broke down", but she didn’t, she just vented with a manipulative twist. Degree of difficulty: 7.5.

One Nation leader @PaulineHansonOz has claimed Senator Brian Burston tried to defect to the Shooters Party.

Anyway, Brian reckons he’s not going anywhere — not resigning from One Nation and there is no way he’s giving up that Senate seat. Then there is the rectal thing. 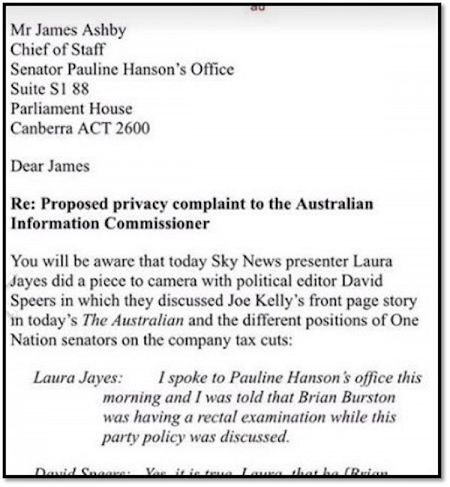 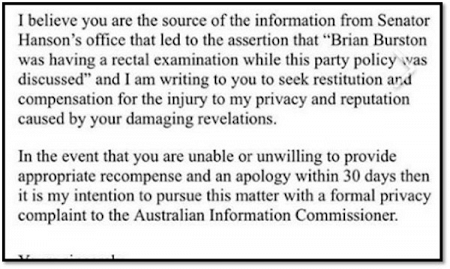 Except we are not so sure this alleged blue is not an Ashby confection, for whatever reason.

Perplexed by the apparent suicidal nature of this most recent spat, IA called Burston’s chief of staff, Peter Breen.

Breen is allegedly a lawyer and was once an Upper House NSW MP (for one term). Possibly because he lives near Burston, Breen got roped into One Nation.

IA had spoken with Breen before, so he was polite while declining to shed any light on the Burston/Hanson/Ashby matter.

Bizarrely, in our view, Breen explained he could not comment because he was "legal advisor" to Pauline Hanson, James Ashby and Brian Burston.

“How could that be?” we asked. “If you are the Senator’s chief of staff, aren’t you on the Burston payroll? How can you have other clients?’

Nice talking to you too.

One Nation, under the astute leadership of James Ashby, is now reduced to a bickering three Senators — its power bloc shattered. And with that shattering will come a severely reduced ability to perform at the polls, we are talking maybe five per cent of the vote in seats it contests.

And with that reduced ability will come the increasing difficulty of generating revenue by fleecing mug candidates to generate the bucks to keep the whole show on the road.

These are signs that a total collapse may not be very far away.

This time One Nation may not recover.

Which reminds me of a joke, stop me if you’ve heard it.

Teacher: And what did you do over the holidays, Tom?

BREAKING: Pauline Hanson expels herself from One Nation. "We need unity in the party and it's clear Pauline Hanson is not a unifying force" said Ms Hanson. "It's simply unacceptable that the party's parliamentary representation has been decimated under her leadership" #auspol pic.twitter.com/PcUZFlwcQc

Sydney bureau chief Ross Jones is a licensed private enquiry agent the author of 'Ashbygate: The Plot to Destroy Australia's Speaker'. You can follow Ross on Twitter @RPZJones.