WATCHING ABC Breakfast on television this morning, one could have been sure that today was the day Prime Minister Julia Gillard would fall on her sword over her alleged actions at Slater and Gordon 17 years ago.

In succession, we had Tony Abbott trotting out the line that actions by Julia Gillard “would appear to be in breach of the law” by her apparently sending a letter over 20 years ago to the WA Corporate Affairs Commission to say an entity set up for people associated with the AWU was a non-union entity — even though it appears this was a completely accurate statement.

This is the same Tony Abbott, mind you, who outright lied to the ABC about setting up a slush fund to bring down Pauline Hanson’s One Nation Party.

“Misleading the ABC is not quite the same as misleading the Parliament as a political crime,” was how Abbott excused himself when finally put under scrutiny about the tawdry affair, in 2003.

Abbott doesn’t explain how he feels Julia Gillard breached the law ― and this largely because there would appear to be absolutely no basis for such an assertion. In fact, no illegality has ever been established to have been committed by any party in this so-called scandal. Of course, defending himself in court for defamation – not to mention vandalism, civil assault and even indecent assault – is not a new experience for Abbott.

So much for character.

ABC Breakfast then cut to a doorstop from Tony Windsor, attempting to talk about legislation passed through Parliament about the River Murray scheme. He was talked down by an aggressive 2UE (Fairfax) reporter. Repeatedly talking over everyone, all this reporter wanted to know was whether Windsor would support Julia Gillard in calling an early election in March to “clear the air” — a prospect that exists, I'm certain, only in the feverish wanderings of this man's tiny demented brain. Windsor tried to ask for other questions, the reporter doggedly persisted, eventually Windsor turned and walked away, laughing at the Canberra Press Gallery ― something that has now become something of a national sport (c.f. Gillard’s misogyny speech).

Quickly sidling up behind Windsor was “early riser” Christopher Pyne. With a smugly supercilious air – in other words, his customary demeanour – he alleged all manner of perfidy by the Prime Minister, before calling upon her to resign. On my couch at home, my jaw dropped down into my lap. I happen to know a few things about Christopher Pyne – things not yet in the public domain, but that are being increasingly whispered in certain quarters – and, frankly, I would be downright astonished if Gillard lost her job before Pyne. His sanctimonious hypocrisy deserves its proper reward.

Then we had Adam Bandt stepping into the fray, keen to talk about the NDIS, a critical reform being discussed in Parliament today — but the appetite of the ABC, which gets its news agenda straight from the pages of The Australian these days, was purely to do with scandal, smear and muckraking of the lowest and most despicable order, and so it cut back to the studio almost immediately — in mid-sentence, no less.

I turned off the news in disgust.

All this coverage is based on talking points issued on the last parliamentary sitting day of the year by an Opposition increasingly desperate after not being able to land a punch all week. It is only getting traction – and blanket coverage – because our media have shown themselves to be, quite clearly, compromised political players.

They are not worth listening to, reading or watching — and millions are turning away from them as result. The aim of news should not be to misinform and mislead, but that is what it now does — reflexively.

As Bill Shorten said this morning, this newly released transcript is not a smoking gun — it’s a "whoopee cushion".

Today, the media will put itself into hysterics over nonsense that may have – but almost certainly didn’t – happen 17 to 20 years ago. Much of this is being led by Fairfax’s Mark Baker, a close personal friend of the former Slater & Gordon lawyer Nick Styant-Brown who seems to be drip-feeding him material he thinks might damage the Prime Minister. Also stoking the fire is the summarily discredited Michael Smith, the sacked presenter at 2UE with a seemingly personal vendetta against the PM. His main source seems to be Ralph Blewitt, a self-confessed sex-tourist and fraud, and one who described by his own sister as a “crook” whose evidence could not be trusted; a character assessment supported by at least one of his two ex-wives, who is on the record as saying she would only trust him as far as she could throw him. Then there’s Deputy Opposition Julie Bishop, who claimed to have only spoken to Blewitt once, by sheer chance, last Friday — when in fact Fairfax reveals she also spoke to him on Wednesday by phone. This is the same Bishop who, before she entered politics, made her name as a lawyer cynically stretching out the legal actions of victims of CSR’s blue asbestos mine at Wittenoom, allegedly hoping they would die before being able to complete their litigation. So much for ethical conduct as a lawyer.

But yet, somehow, this affair is all about the character of the Prime Minister.

This case against Gillard is as flimsy today as it was yesterday ― as it has been for the last 17 years. Today in Question Time, the Opposition will again devote its entire time to “interrogating” the Prime Minister over her actions back in the early-to-mid 1990s before she entered Parliament. The PM will, again, wipe the floor with the bumbling Deputy Opposition leader and, if he has the guts to ask any questions himself, the Opposition Leader. Nevertheless, the media will keep on running the Opposition’s talking points and the Australian public will be left with a sour taste in its mouth — and be less informed that it ever was.

I can tolerate that, barely, from the commercial media – who have an understandable business case for their perpetual bias against politicians opposing the pro-business Liberal Party – but the credence given to this affair by the publicly funded ABC leaves me dismayed. This has gone on for long enough and it's time we demanded better — especially from "our" ABC. 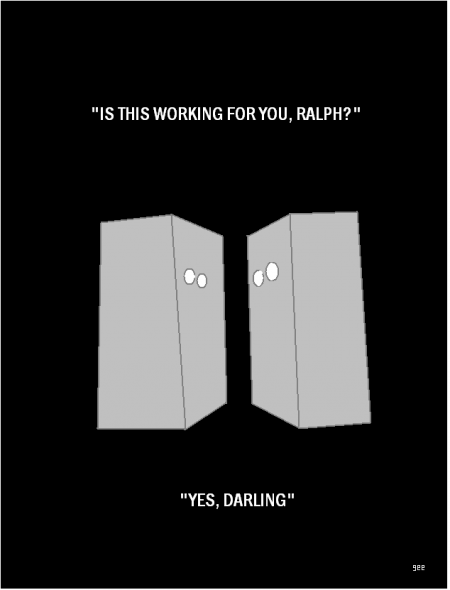