The fact the Government is taking out its frustrations against the ABC is a good sign for the Opposition, says Michael Galvin, who advocates ridicule as a political tactic.

IN A WEEK when the Abbott Government is in self-inflicted trouble on so many fronts, it is nice to know that they have the time to indulge in a good old fashioned bout of ABC bashing — a favourite conservative pastime.

Because it is the best possible sign that they are becoming frustrated with their own incompetence to date and have resorted to lashing out at others they can blame. If they were happier and more confident in themselves, they would not need to take out their frustrations on old targets like the ABC.

It is tempting to see this ABC bashing as a sign that the whole of the Coalition has taken on Abbott's glass jaw — strong on the attack, highly brittle in defence.

In the three months since the election, Abbott has proven every bit as mad and bad as those of us who did not vote for him thought he would be. In fact, there have been so many incidents in such a short time that most of them have not received the media attention they deserved.

For instance, Abbott's pandering to the Sri Lankan Government over allegations of torture and other human rights abuses, and his reward to them in the form of sea vessels that can be armed against their own people, was lost in the news of the next few days, when the Indonesian crisis took over. Likewise, the extraordinary news of the US Government's displeasure with the rejected sale of Graincorp ‒ undoubtedly a front page story in the Australian if Labor had been in power ‒ was quickly overtaken by the education funding fiasco. And on it goes.

Readers of IA need no reminding of the incompetencies of this government. What is of greater concern is the lack of a plan on the other side to make the most of the mess the Coalition is already in. Surely the Oppposition knows that the Senate changes next year, and the Coalition is revengeful and petty enough to punish them and all their causes and constituencies? Who can doubt that from next July they will use their numbers ruthlessly and pitilessly?

So far, Bill Shorten is doing a good job of channelling Barack Obama — but without the inspiring rhetoric. He doesn’t seem to get it that the Conservatives hate everything he stands for, and do not respect an opponent who is "fair and reasonable". In parliament, he seems to want to be the nice guy, the teacher, patiently pointing out the errors in his pupils' homework, more in sorrow than in anger. Tanya Plibersek seems to be missing in action when it comes to the litany of foreign affairs fiascos we have witnessed in recent weeks.

Why didn’t Labor go on the attack over the Indonesian spy revelations? Surely the ludicrous idea of tapping the mobile phone of the Indonesian President's wife is a threat to national security in itself? And that we are indebted to those who made this information public, because it is obvious that the spies could not see how their own stupidity was endangering the national interest?

Yet what we got from Labor was that this was a "Team Australia" moment! Shorten missed a golden opportunity to point out how the relationship between the intelligence agencies, politicians, and the voting public should work in a democracy.

I accept he knows that he cannot be another Abbott and that swinging voters do not want the negativity of the last few years to continue, from either side of politics. But this should not stop him from preparing more forcefully for the battlefield he is facing next year.

The strategy I would encourage the Opposition to consider is ridicule and humour.

To make a joke out of Abbott's failings as a leader and to tag the government as a circus, unable to get anything right. Labels of incompetence tend to stick. Make the labels stick now, just in case Abbott's luck changes, or he shows an unexpected ability to learn from his mistakes, like his hero John Howard obviously did.

The front men of the Coalition ‒ Pyne, Morrison, Abbott himself ‒ are unlikeable. They come across on television as angry and bitter, and self-righteously sure of themselves. But there are other people on the Coalition side who are much more likeable and much more in tune with swinging voters.

Labor's challenge is to make a laughing stock out of Abbott, but not to the extent that he is replaced by more palatable leaders on his own side. Abbott has given them an abundance of material for some great comic routines. 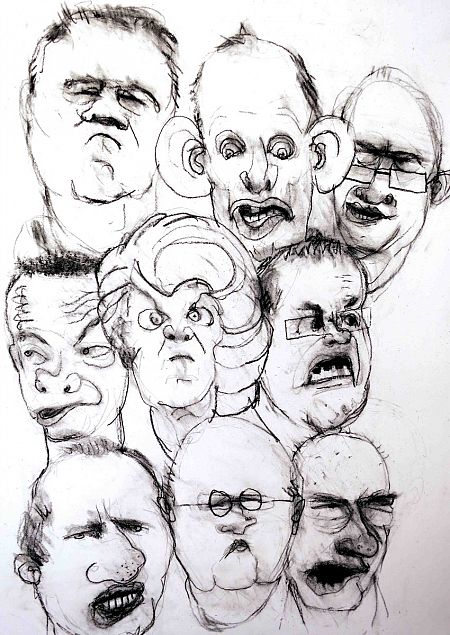 The Abbott frontbench, by John Graham. The originals of all John Graham's art published on IA are available at very reasonable prices. All enquiries to editor@independentaustralia.net.