THERE IS A CONFLUENCE of events that is turning into a raging river of racism and reaction.

Recent revelations about Don Dale and Nauru show us that much of this racism is driven from the top by governments of both persuasions keen to create enemies within and distract us from their real agenda of cutting wages and public services and shifting more and more wealth to the very rich and very powerful.

They are examples of the systemic racism made overt that, coupled with anxiety among small business owners about their livelihoods and workers about jobs and wages, fertilises the extreme right – the likes of Pauline Hanson – and sees her and three of her mates elevated to the Senate.

The media too have been driving this agenda as Bill Leak’s racist cartoon and the support it has received show.

It is no accident that far right Pauline Hanson supporters stormed the Anglican Church in Gosford dressed as Muslims. They did this because the priest there, Fr Rod Bower, supports refugees and multiculturalism, opposes Islamophobia and is well known for Church billboards promoting peace and love.

According to the Attorney General’s pamphlet on Australia’s terrorism laws:

A ‘"terrorist act" is an act, or a threat to commit an act, that is done with the intention to coerce or influence the public or any government by intimidation to advance a political, religious or ideological cause, and the act causes:

This act of invading a church looks to me like terrorism — an action designed to strike fear into people's hearts for political reasons to advance their political cause. Certainly, as Fr Bower says, it has struck fear in some of the congregation (thus 'endangered a person') and I might also suggest, in the Muslim community ('creates serious risks to the public'). 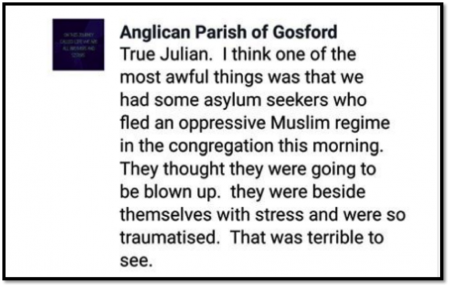 Fr Bower discusses the incident in the Church with concerned people on Facebook.

Will the media call this terrorism? Will politicians? Will the police charge these reactionaries under Australia’s terrorism laws? Of course not.  And where were our much vaunted intelligence services? Nowhere.

This brand of terrorism is useful for the ruling class and their politicians (Liberal and Labor) who have been driving racism and Islamophobia as a conscious strategy to divide and rule the rest of us. These sorts of actions by fascists take their lead from the political "othering" that sees concentration camps for asylum seekers and Aboriginal kids and a rising cacophony of fear and hatred against Muslims.

Liberal minded people like Waleed Aly think you can talk to and reason with people like Sonia Kruger and her calls to ban Muslim immigrants so she can feel safe. You can’t reason with Pauline Hanson or the fascists who support her.

Others like Frank Brennan, Tim Costello, Robert Manne and John Menadue have allowed the agenda of refugee racism by accepting there is a refugee "crisis" and boat turn backs will save lives. We don’t have a refugee problem. We have a government problem. We have a racism problem.

What will save lives immediately is sending planes and ships and boats to Indonesia and Malaysia to bring asylum seekers here for proper assessment and then accepting them. What will save lives eventually is not invading countries in the Middle East.

But there is no violence really, is there? Tell that to Father Rod’s frightened parishioners. Tell that to the Muslims across Australia who feel fear as a result. And remember Philip Galea, another right wing extremist, who has been arrested on terrorism charges in Melbourne.

Words lead to actions.It is not a bridge too far from the brutality of Don Dale and Nauru to vandalising Mosques and threatening the oppressed with violence.

On Sunday, a Perth radio station was firebombed during a heated discussion of Islam. Just under two months ago, in the same city, a car outside a mosque was set alight and destroyed, and the mosque daubed with racist and Nazi graffiti.

When Cessnock Council approved the building of a mosque at Buchanan, south of Maitland, some of those opposed threatened to bomb the council offices and to burn the mosque down.

Because racism is driven by many mainstream politicians, we won’t stop these sorts of displays, threats and actions by talking to bigots. Section 18C of the Racial Discrimination Act will not stop these attacks.

In the short term, I think the time has well and truly come for all decent thinking people to stand up and shut down the puppets of hate and fear and their political advocates. Let's take to the streets in protest to shut down Don Dale, to shut down Nauru and to stop the fascists.

We have to begin to fight independently of the major parties against the nudge-nudge, wink-wink racism of groups such as One Nation, Reclaim (White) Australia, United Patriots Front and the Party of Freedom.

Support independent journalism. Subscribe to IA for just $5 (or less).