Gladys Berejiklian's bridge of lies and destruction in historic Windsor

Roads and Maritime Services is perpetrating vandalism using secretive and draconian measures on a massive scale in historic Windsor, NSW, with the blessing of Premier Gladys Berejiklian. Venecia Wilson reports.

A 15.5-METRE-WIDE, two-storey-high concrete monstrosity is about to be brutally thrust into the oldest public square in Australia.

It will leave a wound that will never heal.

Traffic congestion in the City of Hawkesbury is at a ridiculous level, considering we have a population of 65,000 dispersed over 2,700 square kilometres. Yet this new roadway and bridge are not a traffic mitigation project. NSW Roads and Maritime Services (RMS) has itself stated that the new bridge will be “at capacity” when it opens after two years of construction chaos.

The community has been calling for a bypass for decades. The NSW Government says there’s no money for one — which is odd, really, considering the $2 billion which is to be spent upgrading a couple of footy stadiums. 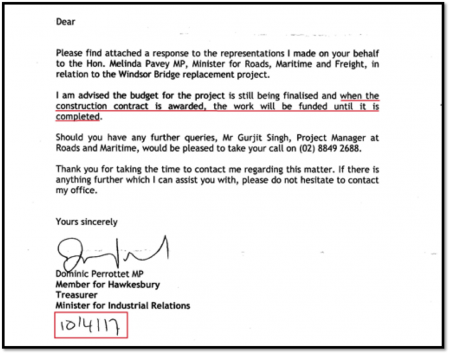 There is no "budget" for the project. It “will be funded until completed”, according to Dominic Perrottet, the Member for Hawkesbury and NSW Treasurer.

Around $30 million has already been spent and construction has not yet begun. Not bad for a project which was initially announced as having a budget of $25 million in total.

NSW Minister for Roads Melinda Pavey stated in writing (below) that $67 million had been "allocated" to the project. 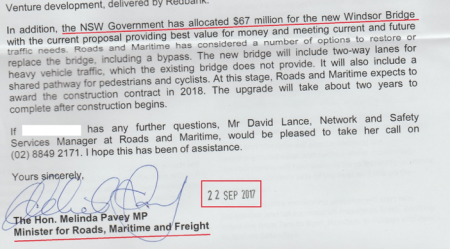 However, Transport for NSW says that’s an "administrative error": 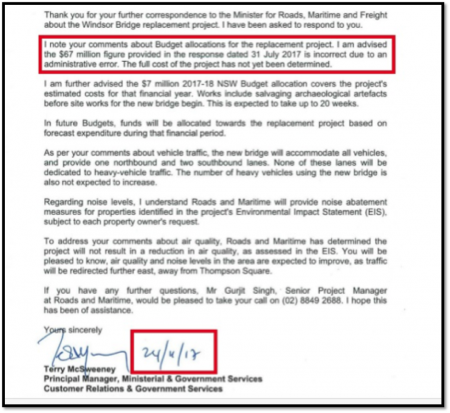 The Windsor Bridge Replacement Project is a writhing mass of obfuscation, with ruination and erasure of nationally significant heritage and archaeology, interspersed with political misspeak, tantric verbiage and good old-fashioned bullshit. And it’s being perpetrated right now.

There is a "salvage" compound in Thompson's Square, ostensibly in order to salvage the archaeological remains, which are to be destroyed by this politically motivated project. However, the RMS is using backhoes, breaking convict-made bricks, digging deep into the colonial layers and moving on down, further back through time into Aeolian dunes, which contain ancient artefacts estimated to be 34,000 years old or more.

They are using backhoes. This is not archaeology. This is wanton, dystopian destruction.

The RMS has ramped up the secrecy and is now using Orwellian methods in order to prevent members of the community from even seeing what it is that is being destroyed. 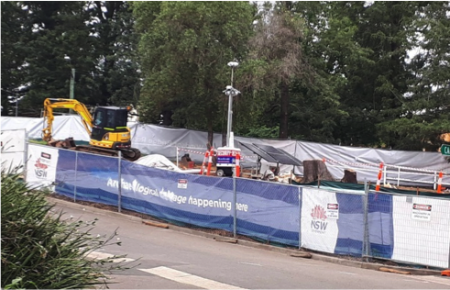 On Monday (4 December 2017), a 360-degree "guard tower" was installed. Fitted with a pan-tilt-zoom camera, multiple fixed cameras, onboard DVR recording all cameras 24 hours a day, long-range movement sensing devices, night vision infrared lighting and a VOIP public address system with speakers, which is used by remote security guards to "warn off" anyone who approaches the compound. The warning given is that the police have been called. In addition, the RMS has now lined the compound fences in full block out material, replacing the shade cloth which was there originally.

What is the RMS trying to hide? Why is the community being treated with such contempt? An Upper House Inquiry was announced into this project on 16 November 2017, yet the destruction and secrecy not only continues, but appears to be getting worse and more desperate.

We know there have been a number of finds on the site, including a potential brick barrel drain, constructed in 1814 by John Howe at the order of Lachlan Macquarie, which is unique in terms of being the earliest public infrastructure of its kind in Australia.

There is also historical evidence that structures dating back as far as 1795 may be found. This exact site contains some of the oldest and potentially most significant colonial archaeology in the country. It is well documented, including by Governors Macquarie, Phillip, Bligh and Hunter.

How do we know what’s been found? Because members of the community took photos, over and through the fence, prior to yesterday’s guard tower installation.

The RMS and the NSW Government are ripping the guts out of our national history, using backhoes and treating the community with contempt.

Dominic Perrottet, the Member for Hawkesbury and Treasurer for NSW, Melinda Pavey, Minister for Roads and Premier Gladys Berejiklian have repeatedly ignored requests to meet with the community about this issue.

As a matter of fact, when she turned up in Windsor to unveil a portrait of herself, Gladys told the world that she’s "protecting" heritage by digging it up. This is despite a five-year, 24-hour-a-day occupation of the site by volunteers in four-hour shifts, 45,000 individually signed letters in opposition to the project, thousands of emails, protest rallies, a Call for Papers, national television coverage and now an Upper House Inquiry — all made possible by Community Action for Windsor Bridge, a group established by the community in opposition to the project.

'They are using backhoes.This is not archaeology. This is wanton, dystopian destruction.'

Every heritage organisation in Australia has voiced objection to this project, including the National Trust. Minister for Planning Anthony Robert’s own independent engineering expert, Peter Stewart, declared that the community would be better served by the refurbishment of the current historic 1874 bridge and the construction of a bypass to take heavy vehicles and through traffic out of the historic precinct.

Two retired ex-chief bridge engineers, Brian Pearson and Ray Wedgewood (Brian led the design and construction of the Anzac Bridge), have slammed the RMS for poor planning and called the project a “political folly”.

And it is a folly. Except it’s not funny. It’s a shameful waste of taxpayer dollars, an offensive assault on national heritage, a massive blow to the future of the tourism industry in the Hawkesbury, won’t help traffic, won’t improve flood immunity and, quite frankly, will be the ugliest thing since the Cahill Expressway.

Venecia Wilson is President of Hawkesbury Ratepayers and Residents Association. You can follow Venecia on Twitter @VWHawkesbury.

A $25 million bridge to nowhere. Sounds dodgy to me. What is going on with the NSW government? http://t.co/RUznzkZIY5

The bridge over troubled Windsor http://t.co/r9Thi9TERZ

Gladys Berejiklian's bridge of lies and destruction in historic Windsor