While ethics in journalism is a hot topic, Bruce Haigh reminds us of when credit for breaking the Barnaby Joyce story was stolen from those who deserved it.

THE NATIONAL POLITICAL EDITOR of The Daily Telegraph, Sharri Markson, last night at the Kennedy Awards won the 2018 Sir Keith Murdoch Award for Journalist of the Year for breaking the story on the sordid Barnaby Joyce/Vikki Campion affair and pregnancy, published in her paper on 7 February 2018. She also took home the Outstanding Political Journalism award and shared the Scoop of the Year award.

The problem is that she did not break the story of Barnaby Joyce's affair or pregnancy. Credit for revealing the affair goes to Serkan Ozturk, the editor of True Crime News on 24 October 2017. News of Joyce's staffer's pregnancy was broken three weeks later in Independent Australia, in a story by Sydney bureau chief Ross Jones on 19 November 2017.

Joyce stood in a by-election in the seat of New England held on 2 December 2017. Dates are important. It is alleged – and it certainly seems – that the embedded mainstream media held off on the story until the seat, critical to the Government's hold on the lower house of Federal Parliament, had been secured by Joyce.

But even then they cut him slack. It was only when Joyce’s new partner, Vicki Campion, was obviously pregnant that the mainstream media could no longer sit on the story. Markson threw discretion to the wind and published. She gave no credit to those who had earlier broken the story.

She raised the dust in the press gallery paddock. She was in fine fettle and top form — she was well placed to win the cup. She was pursued by other sections of the media, impressed with her audaciousness, overlooking the fact that she had published an article defending Joyce on 20 October 2017.

When Paul Barry of ABC's Media Watch chose to credit Markson with breaking the story, IA managing editor David Donovan took issue with the fact that the normal courtesies of acknowledgement had been denied.

Rather than admit their mistake, Jason Whittaker of Media Watch combatively took Donovan to task.

‘David, we’re well aware stories were in circulation earlier ... we didn’t rake over ... tweeting/gossiping/blogging/reporting. The Daily Telegraph offered photographic proof of the staffer’s pregnancy and confirmed that ... Joyce was the father, clearly this has triggered a wider investigation ... Nothing that came before had managed to do this.’

Independent Australia is a member of the Canberra Press Gallery and the Australian Press Council.

And as we have seen over the past week, the ABC and other sections of the MSM have been prepared to accept what BuzzFeed has said about Emma Husar, but have not been prepared to do the same with Barnaby Joyce when True Crime News and Independent Australia ran with facts concerning Joyce’s flouting of the law. BuzzFeed ran with rumours relating to Husar, Independent Australia ran with facts — different treatment of two politicians on opposite sides of the fence and two journals that covered the stories.

Laughable.. Why all the indignant shock? Read about this on Independent Australia months ago.. EDITORIAL EXCERPT: The Barnaby Joyce affair — another case of #mediafail (except for IA) https://t.co/GfCO4cpRns @IndependentAus #auspol

What Whittaker appeared to say was that Independent Australia and True Crime News were not serious political journals and that they dealt only in gossip and innuendo, implying that The Daily Telegraph does not. He refused to countenance the notion that they could break a story. He should be reminded that before it was closed down by ABC Managing Director, Michelle Guthrie, the ABC online magazine, The Drum, broke many stories which The Daily Telegraph refused to run.

If the ABC were not so elitist and a little more open to considering non-mainstream information, facts and opinions might not be constipated from the constant LNP/IPA diet. Sugar hits are not part of the diet of intelligent and concerned citizens seeking the truth. They comb the "net", referencing and cross-checking sources that put The Daily Telegraph and Media Watch to shame.

At a time when The Australian and The Daily Telegraph have become the Völkischer Beobachter and Der Stürmer, are the equivalent alternative voices in Australia to La Libre Belgique, L’Humanité and Sztuka i Naród to be scoffed at and overlooked? I would suggest, at peril to democracy.

Sharri Markson is engaged in an exercise of deception. The truth behind the Joyce cover-up goes to the heart of Australian journalism and all that ails it. The fact that the prize in this instance is the Sir Keith Murdoch Award is apt. Murdoch denigrated the great Australian General, Monash, by claiming that he was unfit to lead the Australian Corps in France because he was a Jew. He lobbied General Haig to have the appointment overturned. Fortunately, he was ignored. All the Australian senior officers supported Monash, who went on to successfully change the face of battle on the Western Front.

Markson should graciously acknowledge the truth and give credit where credit is due. She will be a better person for it.

Bruce Haigh is a political commentator and retired Australian diplomat. You can follow Bruce on Twitter @bruce_haigh. 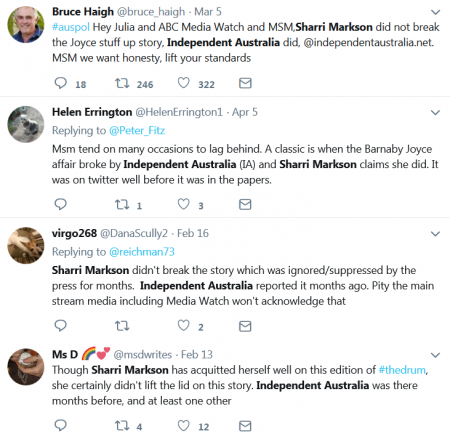