Julia Gillard is finished says the mainstream media — for years now. Letitia McQuade asks whether we are all being taken for a ride. 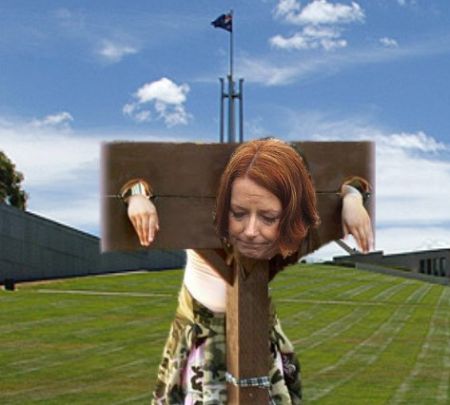 Despite strenuous denials from within the U.S. administration, rumours persist that president Barak Obama himself authorised the alien abduction and probing of the Australian Prime Minister Julia Gillard, along with right wing commentators Andrew Bolt and Alan Jones.

It is believed the three were abducted in order to run tests utilising advanced Alien technology, to try and ascertain why press pundits are unable to recognise any positive social policy put forward, or implemented by centre left leaders.

Sources say a secret report, delivered to the U.S. president by the Area 51 Aliens, stated that while the results were ultimately inconclusive, there where strong indications that a lack of moral conscience, a sociopathic lack of empathy, and editorial prejudice linked to large pay cheques on the part of the pundits were most likely to be at the root of the problem.

The report also stated that a leader being a member of a minority, or female, was likely to exacerbate the problem ― as while normal folks were capable of hearing what such people had to say, right wing pundits seemed to possess neurological bypass filters that tune out anything said by anyone who isn't Christian, white, male, obscenely rich and over 45.

Ok, I know it's silly. But how many more of these ludicrous BS non- stories are we expected to endure? ‘Sources within the government deny that Julia Gillard has lost support of the party room’;’Labor power brokers deny leadership spill is imminent’, coupled with a sensationalist quote from an unnamed MP who is apparently crying into his (and it is usually a “his”) beer as he prepares to pack up his office.

I mean, really, what is the mainstream media's obsession with beating this dead horse? Do Rupert and Gina think if they say it often enough it will magically happen?

Gillard's taken it to the vote, and more than once. Why won't they drop it already? And why was Tony so keen to call for a no confidence motion to get the election underway immediately? Why is the media so keen to beat up the image of a government in crisis, when there is clearly no story there?

I have my suspicions, and I suspect it's because the tide is turning, and Rupert and Tony know it.

People are not as stupid as they would like us to believe. People are looking at the track record of the government, looking at the policy gulf, and are not so sure it's a great idea to jump onto the half-inflated raft offered by the Opposition.

In spite of what the polls, the opposition and the media say ‒ that the election result is a forgone conclusion ‒ I can't shrug the feeling that the Opposition still feel a bit cagey about their chances. I don't think they've forgotten that the Murdoch owned polls in the U.S. called it a shoe in for Romney.

Speaking of Newspoll, it may interest many of you to know that Newspoll only uses landline numbers to do its polling. So what, you may ask… Well it's not rocket science to figure out that landline numbers contain an area prefix, which would make stacking the polls not too tricky ― not that I would suggest for a moment that anyone would do such a thing deliberately.

And, as Bob Ellis is wont to say, who has landlines anymore anyway? Certainly not the young and the low incomed ― that is, the people more likely to vote Labor.

I also recall reading an article where they quoted a lovely man who said he was called for "every Newspoll", which is kind of suspicious when you consider most of us seem to have never been called.

Anyway, it all seems deeply suspicious to me, and it plays into my palpable sense that Rupert, Gina and the LNP are not entirely convinced that, even with all the power of the press behind them, they can continue to lay a convincing line of crapola all the way to September 14.

They are simply too desperate.

The cracks are starting to appear already, like this rare little flag of editorial independence published recently by The Age.

Anyway, it seems there's at least one popularity poll you will never hear about in the mainstream media ― a social networking poll!

And Tony Abbott? A comparatively paltry 35,500.

Gillard is almost five times more popular. No, really, go ahead, look for yourself. 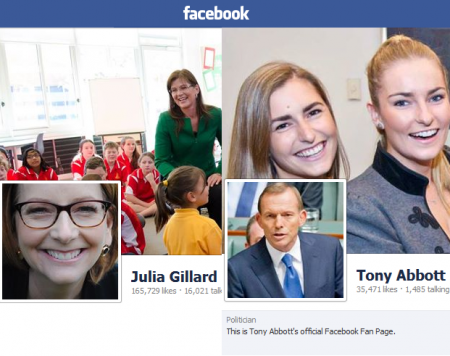 So, is it possible they are feeding us story that just isn't accurate?

It should be noted: at four of the past seven federal elections the party trailing months out from polling day has come back to win.

"Appearances can be deceptive," said the porcupine crawling off the scrubbing brush.