Tony Abbott has failed at every significant thing he has set himself to do over the past four years, says Letitia McQuade — is that the sort of person we want to be our PM?

FOR OVER THREE YEARS now Tony Abbott has had one solitary objective: to take the job of Prime Minister ... and it really shouldn’t have been all that hard.

Back in 2010, the government were still reeling from the leadership spill that ousted the perennially popular Kevin Rudd and it wasn’t like Abbott was touting any big threatening policies to spook the electorate. Given the temper of the times and his congenial relationship with the media, he should have easily been able to pull enough of the popular vote to make it over the line.

Next, with the parliament hung the post-election wrangling got under way. All Tony had to do was to outperform Gillard and secure the support of the Independents — most of whom came from ostensibly conservative regional or rural seats and had had past affiliations with the National party (the Liberal Party's Coalition partner). He even told one of the Indies he'd do everything but "sell his arse" to become PM. Surely, then, Tony should have been an absolute shoe in.

OK, he didn’t win that round, but his hopes remained high. The government was in on the slimmest of margins and the slightest movement would cause a spill. All he had to do was rattle the government’s cage hard enough and someone was bound to fall over, and in the aftermath he would undoubtedly scoop the prize.

A target was identified, sights were set, and with the media fully on side Craig Thomson looked like an easy mark. Surely Tony could hound Thomson out of his rightful place in parliament with a relentless smear campaign, and constant haranguing in the chamber.

With Thomson proving a bit more resilient than he had hoped, Abbott’s mob set their sights on a new target. Naturally, Peter Slipper needed to be punished for tiptoeing across the floor to the other side… enter James Ashby. It seemed like the perfect scandal. Abbott was a raging fire — spewing bile across the chamber, haranguing and hurling abuse at the Prime Minister in question time, declaring the government invalid and demanding an early election.

As we all know Ashby's case was adjudged an abuse of process and thrown out of court – although, like a case of herpes, he promises to return – and the Government remained, rather unsurprisingly, intact.

With an election date now firmly on the visible horizon, Abbott decided that maybe he should push a couple of policies out into the electorate. A bit of scaremongering about the cost of the NBN, coupled with a "cheaper" alternative, should garner some popular support.

Did he pull it off? Epic fail.

The policy was universally ridiculed across social media — so much so that even the mainstream media were reluctantly forced to cast a critical eye over it.

Tony sits down to do a rethink.

He will fight with what he knows is a winning piece of artillery. He will use the xenophobic hysteria around Islamic refugees to drive the fear of Allah into the electorate.

Trouble is, he doesn't actually have a solution, just a mantra: "I will stop the boats". So when some upstart asks, "how?", Tony is stuck for an answer that doesn't leave him sounding like Adolf Hitler's first cousin. While Tony's scare tactics may have managed to convince some of us that a few boat loads of refugees are a greater threat to us as the First Fleet was to the aboriginals — has he convinced us he can actually stop the boats?

Never mind, the polls have told him the prize will be his soon enough – as long as he can keep from shooting himself in the foot – so perhaps he should just wait it out?

But still there is a nagging worry that he just can't silence, a fear so overwhelmingly horrific that Tony just can't put it out of his mind — in four out the last seven elections the winner has come from behind in the polls and, worse still, the Government's actually starting to break through with their economic and policy message. NBN, Marine National parks, Carbon Price, NDIS, Gonski, the best set of books in the developed world, and people are starting to ask themselves, "hang on, why do I hate the government?"

"Oh my God" thinks Tony, "if this keeps up they may just beat me in September".

New plan, force an election right now, while the electorate is still paralysed with an unquestioning fear. I'm still ahead in the polls , and there's no messy policies out there for me to explain. "I know, I'll table a no-confidence motion, and get us to the polls within the month ... that will seal it for me." 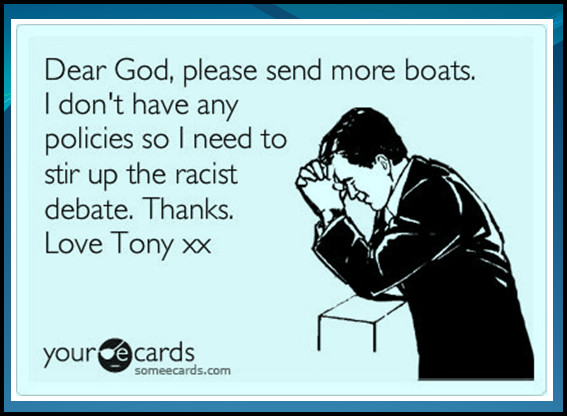 As far as I am aware, he hasn't even managed to convince the Independents to cross the floor even once to stop a single piece of legislation.

As a nation, I think we need to seriously question the suitability for high office of a potential prime minister who has failed to achieve every single (seemingly achievable) political goal he has set himself for the last four years. Particularly when you contrast it with the staggering economic and policy successes of the current Government, where he has been outclassed, outmanoeuvred, andout foxed by Gillard's team at every turn.

Perhaps I am being a little unfair though.

There three things at which Tony has been unquestionably successful:

As far as I'm concerned, Abbott and his cohorts have turned our parliament into a national disgrace. As I sit here on assignment in the UK, I am struck by the contrast.

In the British political landscape, personal insults are rare, and vigorous policy debate is the norm. By comparison, Our chamber is embarrassingly cringeworthy — and there is not a lot I think the Brits do better than we do!

Like most Australians, I am utterly sick of it and, by and large, I blame Murdoch and his media. As children, we were to taught to ignore bullies, but not our Murdoch media! Stick it on the front page – BOLD ALL CAPS – and pretend it's real and relevant news.

It's not! It's name calling, smearing, lying, and muckraking.

Could our media do its job please and put Tony on the spot for once?

What are his intentions? What does he stand for? What are his policies? Where are his costings? We can't ask him ourselves, so we need you – the mainstream media – to do it for us? Or at least let's have someone from IA in the press gallery.

But then again, even if someone actually bothered to ask him, could he or would he answer us? Or would it just be one more in the long list of things Tony has failed to do. 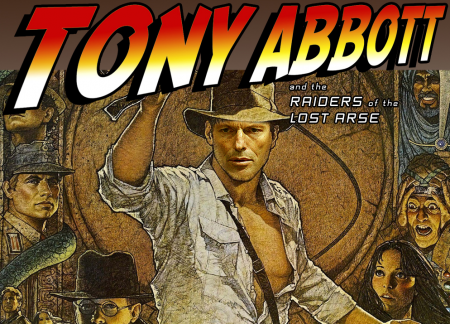