Fukushima fallout: radiation found in US milk, water and air

Radioactive material from the troubled Fukushima Daiichi nuclear power plant in Japan has fallen in rain on major cities across the United States and been detected in milk, water and even the air. Mike Ludwig from Truthout reports on evidence the US authorities are not telling the public the whole story. 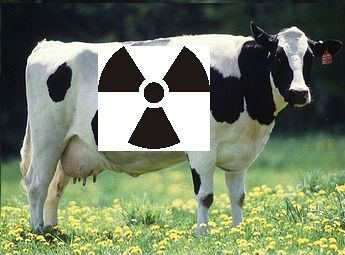 RADIOACTIVE MATERIAL from the troubled Fukushima Daiichi nuclear power plant in Japan has fallen in rain on major cities across the United States, according to the Environmental Protection Agency (EPA). The agency has also detected radioactive materials in milk, air and drinking water. The EPA and other government agencies continue to insist that they expected to see some level of radiation on US soil after the Daiichi disaster, and the current radiation levels are not a cause of public health concern. Truthout has identified gaps in the government's data, however, and nuclear watchdogs are concerned that public officials are not telling Americans the whole story.
Consider Boise, Idaho, where the amount of radioactive iodine-131 in rainwater jumped from 242 picocuries per liter (pCi/L) on March 22 to 390 pCi/L on March 27, according to the EPA. Iodine-131 levels found in rainwater sampled from about a dozen other cities range from 8 to 125 pCi/L.
The Boise figures seem high when compared to the Maximum Containment Level (MCL) for drinking water, which the Safe Drinking Water Act sets at 3 pCi/L for iodine-131 in water consumed by people over many years. Fortunately for Boise, iodine-131 decays in about eight days, and the most recent tests on drinking water in Boise found iodine-131 levels at 0.2 pCi/L. But some questions remain unanswered.

"The rainwater appears to be contaminated, and that rainwater falls on rangelands and agricultural fields, but we're not getting any data on agricultural crops and little data on milk," said Dan Hirsch of the nuclear watchdog group Committee to Bridge the Gap.

Hirsch told Truthout that he is not sure if radiation is posing a threat to public health because the government is not doing enough testing, and agencies are putting "spin" on the data they do release.

Radiation tests on milk have come up positive in several US cities, but Boise is not on the list of cities where milk is tested. Milk in Little Rock, Arkansas, had 8.9 pCi/L of iodine-131 on March 30. Milk in Phoenix, Arizona contained, in at 3.2 pCi/L that same week, and milk in Los Angeles, California, had a similar reading of 2.9 pCi/L. These results were posted about a week after the samples were taken.

These figures appear gloomy when compared with the drinking water MCL of 3 pCi/L for iodine-131, but the government agencies claim that the contamination is far below levels of public health concern. That's because there is no MCL for milk, according to Hirsch. Instead, government agencies rely on Derived Intervention Levels (DIL) set by the Food and Drug Administration (FDA). The DIL for iodine-131 in food products like milk is set at 170 becquerels per kilogram, an amount that is 1,500 times higher than the drinking water MCL.DILs provide agencies like the FDA with guidelines – not mandates – as to when the government should take action to keep food contaminated by radioactive material out of the hands of consumers. A DIL "does not define a safe or unsafe level of exposure, but instead a level at which protective measures would be recommended to ensure that no one receives a significant dose," according to the FDA web site.

"[DILs are] a guidance as to when an emergency action should taken to intervene, but these are in no way to be considered safe levels," Hirsch said.

Hirsch said that DILs are "very inflated" and meant for emergency situations like the detonation of a dirty bomb or a nuclear meltdown. DILs help officials with "triage" during an emergency.

Hirsch and other nuclear critics agree that there is no safe level of exposure to radiation, and even small doses can cause cancer, a position that is backed up by at 2005 report by the National Academy of Sciences.


Patty Lovera, the assistant director of watchdog group Food and Water Watch, said that government agencies need to do more testing for radiation in domestic products and food imported from Japan before making blanket statements dismissing the possibility of a threat to public health. She said there is a "very concerted effort to reassure people," and criticized public officials for making analogies between radiation found in food and water and radiation from x-rays and cat scans.

Under normal circumstances, the FDA only inspects 2 percent of imported seafood and tests about 1 percent, said Lovera, who is calling on the FDA to be more specific about how it is ramping up efforts to inspect food imports from Japan. The FDA has already barred milk and vegetables from the region where the Daiichi plant is located, but Lovera said the FDA should follow in other country's footsteps and temporarily bar seafood imports from Japan as well.

Like Hirsch, Lovera wants government agencies to be more upfront about the possible risks of radiation, even at the levels reported by the EPA, so individuals of different ages and health statuses can make the right dietary choices.

"That sophisticated of a conversation isn't happening," Lovera said. "Instead, it's 'don't worry, don't worry we'll tell you when there's an emergency' ... but with an increased understanding of low-level exposure, there should be more information out there so individuals can make choices.

"While Lovera is concerned that agencies like the FDA don't have the resources to provide enough information, Hirsch sees a potential conflict of interest. He is concerned that the US government may be downplaying the dangers of radiation from the Daiichi plant to avoid undermining support for new nuclear projects in the US. He pointed out that the Obama administration has affirmed its commitment to building more nuclear reactors in the US and has urged Congress to approve $54 billion in subsidized loans for new reactors.

"This is kind of a run-through for what would happen if a similar disaster occurred in the US," said Hirsch, who lectures on nuclear policy at the University of California, Santa Cruz. "It seems to me that the agencies are getting an F."


(This story was originally published in Truth Out on Tuesday, April 12 under the title 'Radiation Detected in Milk, Air and Water - Is America Safe?' and has been republished here with full permission.)