Is Australia on the path to being a fascist state? Despite the recent anti-lockdown protests being hijacked by the far-Right, Dr Martin Hirst argues “not yet”.

THE PROMISED “every day” anti-lockdown (and anti-vaccination) protests in Melbourne lasted just under a week before they ran out of steam and quietly faded from the streets. This is actually a good thing because on the first day it looked alarmingly like an Australian version of the gilets jaunes “yellow vests” was about to kick off.

The tradies who took part in the attack on the headquarters of the Construction, Forestry, Mining and Energy Union (CFMEU) came out in much smaller numbers the next day and danced on top of the Westgate bridge. However, by Wednesday they had largely disappeared from the fray and left the front lines to a rabble of anti-vaxxers, conspiracy theorists and hard-right hopefuls trying to recruit new cadre to their ranks.

From fascism to farce

My fellow IA columnist and Antifa comrade, Tom Tanuki, has done a great job of reporting on this “movement” and the best of the mainstream coverage was Ben Schneiders’ solid analysis of the problems within the CFMEU that have contributed to the confusion and anger among the union’s rank-and-file. The rank-and-file perspective is also covered well by Ryan Stanton in Red Flag.

What was left at the end of the week was a dwindling coalition of disorganised and hopeless elements wandering around in confusion and mired in a crossfire of accusations about who might be a police informer. This was well documented on Twitter by various people who were following the Melbourne “freedom fighters” on the Telegram messaging app.

The exchanges went from weird and angry to total rabbit hole, QAnon, batshit crazy. It got to the point that people were seriously discussing how Victorian Premier Dan Andrews altered the weather to put people off protesting and how the Victorian Government had contracted with China to send troops to quell the “uprising” in Melbourne.

I even saw posts claiming that the earthquake was caused by either the Victorian Government testing a nuclear weapon or blowing up tunnels under the city that were used for sex trafficking children. I must say, I was somewhat relieved my initial concern that the fascists might recruit CMFEU members into a viable street movement had come to nothing.

The winners and losers

The fascists lost and that’s a good thing. However, it was perhaps also a little too close for comfort. It must be said that the main thing that blunted these protests and made them fizzle out so quickly was the brutal police presence.

Since March 2018, Victoria Police has stockpiled so-called non-lethal weapons which were initially purchased to deal with anti-fascist protests and so-called African gang violence. The week-long disruption in Melbourne was the first real opportunity that the cops had to train with the rubber bullets, tear gas and CS spray over extended deployments.

If you were involved in the Black Lives Matter protests in 2020, or attend climate emergency protests and refugee rights rallies, then the scenes from Melbourne should be very concerning. The progressive movement, the organised Left and the trade unions will be on the receiving end next time. The more hardline elements of Victoria Police were clear winners and they will be emboldened to use the same tactics against other protests in the future.

The other winners from the Melbourne protests were the Right-wing elements of the Liberal and National Parties — MP Craig Kelly and ultimately Prime Minister Scott Morrison. It was very clear that a number of senior LNP members were willing to signal their support for the Melbourne protests. Morrison only offered a mealy-mouth condemnation once the rioters had desecrated the Shrine of Remembrance but even then, he shadow-boxed and simped up the line that he could understand the frustration of the “tradies”.

We should not be surprised by this. As I wrote a few weeks ago; Morrison needs every vote he can get to win the looming federal election. He is willing to embrace the conspiracists and pander to their #freedumb demands because he cannot win without them. This has become even more obvious now that the Newspoll puts the gap between the two main parties at around eight points, 54-46.

The Liberals are particularly vulnerable in Victoria and keeping the anti-vaxxers onside is crucial if they are to avoid an electoral wipe-out. Morrison needs the preferences of the #freedumbs who can probably be convinced to keep taking the horse paste and vote for Clive Palmer’s patsy candidates.

Of course, we can’t leave this discussion without mentioning the Murdoch media. I quipped on Twitter some weeks ago that the real leadership of the anti-lockdown movement was based in the News Corps offices in City Road, Southbank. That has proven to be the case. The anti-Labor vitriol in the Herald Sun and the obvious bias in Murdoch’s news outlets – slamming Dan Andrews and other Labor premiers while praising NSW Premier Gladys Berejiklian and ignoring the closed borders in Liberal-led Tasmania South Australia – is real, deliberate and effective.

As many have noted in commentary and on Twitter, Murdoch is campaigning heavily for Scott Morrison for talking up Berejiklian and beating up on Andrews in Victoria, Premiers Mark McGowan in Western Australia and Anastasia Palaszczuk in Queensland. Murdoch’s columnists and editors are staunch “open up” and “let it rip” advocates as well as being just all-round nasties.

The natural political home for Murdoch journalists is among the “petty bourgeoisie” and lumpen elements who are fuelling the protest movement. Journalists tend to ideologically gravitate towards the middle class and their editorial outlook often represents this fragmented, confused worldview that takes its lead from the ruling class. Trust me on this; I wrote my PhD on the class politics of journalism 20 years ago. 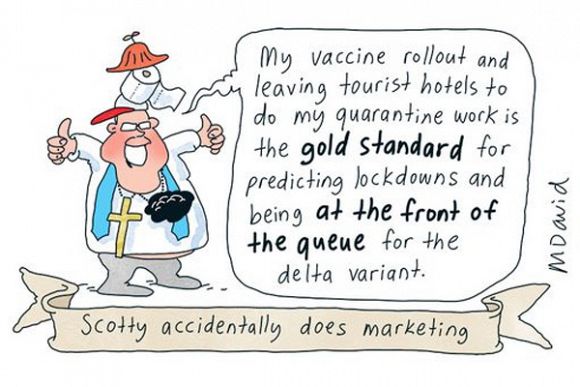 Scott Morrison will cling on till the bitter end

Despite recent speculation that the Prime Minister will call an early election, circumstances will force him to tough it out till the middle of 2022.

In times of severe crisis, particularly when its class privilege is threatened, the bourgeoisie will turn to the fascist fringes to shore up its power with brute force. In my view, we’re not there yet.

The first important conclusion we can draw from the rapid decline in numbers and the woeful disorganisation is that what happened in Melbourne was not a union-friendly protest. This is where a comparison with France is an apt one. In the French context, the yellow vests are – in class terms – elements of the lower rungs of the middle class; what Marx described as the petite bourgeoisie.

Capitalism puts this class fraction under intense economic and social pressure, and in times of acute crisis, members of the petty bourgeoisie can turn towards fascist political formations who promise them an easy way out — blaming migrant workers for “stealing” their work and so on.

In the Australian context, tradies as a group could be considered members of this social class. A tradie is often somebody who owns their own tools and works contractually between jobs. The successful tradie is usually someone who aspires to own a small business — your classic suburban sparky or plumber.

On the other hand, large numbers of tradies also work for the bigger contractors on large construction sites. It is this latter group that forms the core membership of the CMFEU. But they tend to oscillate between being contractors (effectively self-employed) and working on union job sites. This creates a real contradiction and splits within this group; they are not all the same and do not have the same economic or political interests. We saw this split manifest in the protests outside the CMFEU offices.

In historical terms, the petty bourgeoisie is too unstable as a class to formulate any real demands and it cannot really organise much on its own. As we’ve seen with the Melbourne protests, this is a fatal flaw in their cunning plans. Without any organisational or ideological leadership, this melange just melts under pressure.

To be successful, a fully fascist movement needs a political organisation to sit at its head. This leadership often falls to critical elements of the ruling class who recognise that the fascist street gangs are a necessary weapon in their class war. This alliance – between charismatic fascist orators and big business – is what made the Nazis and the Italian fascists so successful in the 1930s and why Oswald Moseley’s brown shirts suffered a crushing defeat in the UK at the same time.

We don’t yet have such a cross-class political formation in Australia. Morrison and the Liberal-National Coalition is not a fascist front. Neoliberal economic and social policies have done the job of driving down wages, undermining the welfare state and neutralising the trade union movement. Morrison just needs the quasi-fascist lumpens and petty bourgeoisie elements to vote for him.

Right now, the fascist grouplets are too small to have any real impact. The local Proud Boys knock-offs are tiny and fragmented. They’ve already attracted police attention and they bicker about who should be in charge. On the other side, even the most right-wing of the established groups – Pauline Hanson’s One Nation and the Clive and Craig Clown Show – are not yet really committed to fascism. People like MP George Christensen talk up fascist sentiment, but he is a bloviator, not a gladiator. However, the tinfoil hat brigade has not given up.

It’s not over till Tinfoil Tina sings

Sorry to say it, but the madness is not over. Even though the putative leaders of the Melbourne rabble are now out of action (to comply with bail conditions), new agitators are emerging and new celebrities – petty bourgeoisie to the hilt – are pumping up the tyres on the anti-vax / anti-lockdown bandwagon. The latest is Scott Morrison’s favourite songbird Tina Arena (already dubbed #TinfoilTina by one Twitter wit) who has joined forces with “wellness advocate” Loz James in an attempt to spearhead another uprising.

IS THERE MORE to Tina Arena? Here she is rubbing shoulders with wellness influencer lozjames_ on Instagram. They're just shootin' the breeze about freedoms and telling us it's "time to wake up". Ya know, freedom talk. pic.twitter.com/bAQr33Lfsc

There is no reason to think this will be any more successful than the last half-dozen. Without the weight of the disgruntled tradies or organisational support from a well-funded party apparatus, it will just be more lumpen fragments pissing in the wind.

The real problem for us is still Scott Morrison and defeating the COALition at the next election is how we best shut down the Nazi threat (at least for now).

The worker who is indifferent to the class struggle, who derives satisfaction from his material well-being and from his lot in life, will be able to attain a mediocre bourgeois moral standard, but will never be able to raise himself to the level of socialist ethics. pic.twitter.com/p6FKfUsLIm