Free childcare would end the 'slavery' of motherhood

In having to pay for childcare, mothers are forced into a situation akin to the definition of slavery with little to no benefits, writes Christopher Budd.

SLAVERY, for most of us, brings to mind African American slaves being dehumanised and brutally exploited. More recently, we have been reminded of the slavery endured by First Peoples and blackbirded South Sea Islanders. Historically, slaves existed in many societies under a variety of conditions, including slaves that lived comfortably and held positions of power.

Two conditions bound all those people together as slaves. First, they did not receive the benefits owed for their labour. Second, they did not control their situation — they could not leave if they wanted to. I use past tense as these days we like to think we have outlawed and eradicated slavery. But if we apply these two conditions, it is apparent there is an entire class of slaves in our society to which we turn a blind eye — mothers of young children.

Outlandish, I hear you cry. Mothers aren’t slaves. They choose to go to work, for which they get paid. Or they choose to look after their children. That’s not slavery.

Further, when mothers labour in paid work, they still do not benefit. Their pay is spent on childcare. It is widely documented that working mothers net zero and even negative pay after they have paid for childcare, despite childcare being subsidised. Again, the children benefit, the husband benefits and society benefits. Plus, when mothers do paid work, their employer and the economy benefits. Still, none of these benefits go to mothers.

Moreover, mothers do not control this situation. They do not control the cost of childcare, or the cultural assumption that they will stay home and care. Even when mothers earn more, lower-earning fathers often feel compelled to work. There is no neutral assessment of what is best for the family in choosing who cares and who works. It is assumed that mothers will care and if they choose not to, it is their income (and superannuation) that will be spent on childcare. There is no choice available to mothers where they receive benefits. 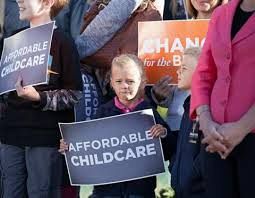 Getting mothers back to work

The difficulty for mothers to return to work is an enormous economic problem, says Tom Rundle, who suggests a possible solution.

Maybe also, no. The practical reality is that there is a sexist context when choosing how to care for young children. Even if there was not, one income is no longer enough. As the latest Household, Income and Labour Dynamics in Australia (HILDA) results show, more than one income is required for an ordinary existence in contemporary society. Mothers have to work.

This leads to the conclusion that mothers of young children are slaves. They do not receive benefits for their labour and they do not control this situation.

Mothers might not look like suffering slaves. And sure, if made to choose, I would definitely prefer to be a mother today than a blackbirded South Sea Islander. But suffering is not a prerequisite of slavery. No matter how gilded the cage of early motherhood, it is still a cage.

The only way to break mothers out of this cage is to give them the benefits due for their labour. This is most easily achieved by free childcare because mothers will get to keep their earnings for themselves. As a bonus, society will reap the benefits of more children accessing more early childhood education. Despite free childcare, some mothers will still stay home. However, for the first time staying home will be a true choice.

Christopher Budd works full-time, studies part-time (law) and likes to fight injustices big and small. He has written on a diverse range of topics including international law, education, social policy and health policy.

Free childcare would end the 'slavery' of motherhood

21 February 2021, 7:00am In having to pay for childcare, mothers are forced into a situation akin to the ...
Join the conversation
comments powered by Disqus
News updates