Flushing out the predators

Peter Wicks has an idea he thinks will make it harder for paedophiles to prey on our precious and vulnerable youngsters. 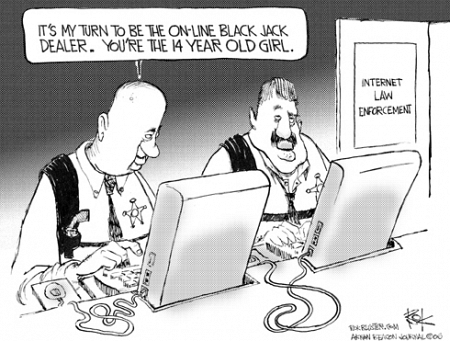 Most people like kids. Even if you don’t want kids of your own, you probably wouldn’t wish a child harm. Even that little brat screaming in the confectionary aisle in the supermarket isn’t so bad really… at least it ain’t your brat…

It’s the one thing virtually everyone agrees on. Even the hardest of the hard criminals in jail will tell you, kids need protecting. I sure as hell wouldn’t want to be in the big house for doing any harm to a kiddie — it would be a mighty painful way to live out the rest of your days…

In fact, we go to great lengths to protect children, and rightly so. Everybody deserves a decent start in life.

We fight for children to have healthy choices at school canteens. We fight to make sure that their TV shows give off the right messages. We change the speed limits when the kids are coming and going from school. We have government agencies to be sure they are not victims of neglect. There are so many different ways we ensure that our children are kept safe.

If only we thought the same way when it came to passing laws.

If you were to ask the murderers, mobsters, serial killers, and every other hard nut in the slammer what the worst type of criminal was, I reckon they’d all say the same; nobody likes a paedophile. These scum are the lowest of the low, the bottom of the barrel, the skid mark on the jockstrap of society.

Given this is something that virtually all of us would agree on, I have an idea…

Now, if someone conceals, covers up, or hides a murder, or murderer, guess what? They are guilty of being an accessory to murder.

If you cover up, or hide the sexual abuse of a child, you are usually just referred to an Aunty this, or Uncle that, or quite often Father this, or Reverend that.

Why can’t we make those guilty of concealing the worst of all crimes pay for their silence? Behind bars.

There is no excuse whatsoever for not reporting a paedophile. None. It’s not like paedophiles don’t re-offend. We need to get these parasites off our streets, and do it as fast as possible.

There should be no exemption to this for any reason. Whether it is a doctor, a lawyer, or a priest in confession — no oath in the world is worth ruining a child’s life for.

It’s about bloody time we actually took some positive steps to crack down on this issue, instead of letting paedophiles hide behind a veil of secrecy. We don’t just need to lift the veil, we need to soak the veil in petrol and torch it.

Those wondering how to clean the paedophiles out of the churches, and those who tacitly endorse these sick crimes by hiding the perpetrators, this idea may help. I’m sure the thought of spending a few years locked up with a bunch of pissed off Hells Angels might just make Pastor Flagon think twice before covering the butt of one of his alter boy chasing brothers.

For those who haven’t seen it, below is the preview for a documentary call “Deliver Us From Evil”. It is a powerful film indeed, and it shows us the case of Father O’Grady – somebody the church knew was abusing children – but did even worse than nothing. The film details how the church moved him from town to town, leaving behind him a wake of absolute misery and shattered lives. It then shows the victims going to court against the church and ultimately the victims heading for Rome to meet the Pope.

If you think that this sort of thing can’t happen here, you may want to have a look at a recent episode of Four Corners that looks at some horrific cases in Australia.

Anybody who thinks the churches – and it’s not just the Catholic Church who’s involved either – should be left to police themselves, here is something to think about. What would you say if the Scientologists, The Brethren, or even the Muslim’s were sexually assaulting children in record numbers? If that was the case, I bet Abbott and the clergy would be screaming blue murder!

Also you want to check out a recent post I wrote regarding the NSW Attorney General’s support and endorsement of an alleged paedophile. That will give you an idea of how much the Liberal Party in NSW cares for the issue. If you still weren’t sure, you could look at how they have cut the Department of Community Services budget by 20 per cent. Now they are trying to privatise it. I can understand that the Minister, Pru Goward is clueless and can’t be trusted to run it, but surely our kids are worth the effort?

Then again, Pru Goward showed her respect and caring nature on The Drum recently when talking about Uluru. Apparently a rock is a rock, it makes no difference that it is an iconic Australian landmark, with huge cultural significance to Indigenous Australians — it’s just a lump of stone to Pru… Anyhow, that’s the genius who has responsibility for our children in NSW, hence my concern.

I think we can all agree that anything that makes convicting tougher for a paedophile, or saves one child from abuse, is a good idea.

Please don’t think it’s just the churches either. Unfortunately the vast majority of abused children will be abused by a member of their family, maybe extended family, or a trusted family friend.

This rule would also help expose predators within groups and associations, such as Boy Scouts, and some boarding schools also.

I know that there will be some, like Tony Abbott, who would not like anything that changes the way the Catholic Church operates. However, this could be an exception to the rules — after all, cleaning out the Church can only help them in the long run.

I cannot imagine any politician not voting to put this in practice as law. I mean, how bad would they look if they voted against something that was designed to cut down child abuse?

Surely this is something we can all agree on…