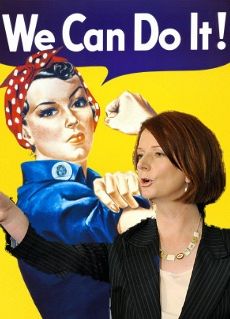 In the vicious, and overtly sexist, campaign against Prime Minister Julia Gillard, where are Australia’s feminists, asks Frank O’ Shea.

The most upsetting thing about the current campaign against Julia Gillard is that it is embraced so enthusiastically by women. At demonstrations and rallies, the crudest banners, those that refer specifically to her gender and her lifestyle, seem to be carried by women. The chants at these events are the kinds that you expect at an English soccer derby, and they seem to be ardently led by women.

Words like 'witch' or 'bitch' have literal and street meanings that could not be applied to a man. The half-hearted step back from these phrases by Tony Abbott is far from convincing. In fact, his way of dealing with them is typically male - a laugh and a wink, followed some days later by a tentative distancing. The fact that he addresses a rabble flaunting these banners, that he is happy to be introduced by a shock jock who has suggested that the Prime Minister of the country be taken out and drowned says more about what he really thinks than any po-faced repudiation.

As a politician Ms Gillard must expect that her policies will be examined, analysed, criticised where necessary, but she has a right to feel that such criticism would not refer to her gender. She would be justified in feeling feel that the criticism of her is so personal that it ought to raise the ire of feminists. Surely, feminism ought to mean more than marching for equal rights at work and in the home and in relationships. Surely there should be some defence of a woman from a working class background who took on the male world of the law and rose to the top and then challenged the even more macho world of politics, yet is publicly pilloried in terms that refer specifically to her gender.

A similar thing happened almost four years ago when American feminists abandoned Hillary Clinton in favour of an African-American. For all their sisterly talk, feminism came a disloyal second to the fear of offending those who felt that correcting the inequalities suffered by coloured people in the US was more important than the chance to show that the most powerful person on the planet could be a woman. So much for the sisterhood.

This leads to the speculation of whether Julia Gillard would be subject to the same vitriol if she were Aboriginal or came from some ethnic background distinguished by skin colour. The shock jocks might give second thought to suggestions of physical harm and might distance themselves from the kind of chanting and banners that would have people removed from a football ground.

What, I wonder, if Ms Gillard were Jewish? That group make up a relatively small section of society, but they know how to protect their own. Even those whose adherence to Judaism does not involve any outward form of religious observance would quickly organise.

I make the point as forcefully as I can that I am not suggesting that Aborigines or Jews would be one-eyed in their support of someone simply because that person was one of their own. But if the criticism was so personal and was based on colour or ethnic/religious background, they would quickly make their voices heard.

So I ask again: where are the feminists when the female Prime Minister of the country is subject to snide comments about her clothes sense or her diction or her decision to live with a man who is not her husband or her political association with a party led by a man who is gay?

As for the ABC’s At Home With Julia, it is difficult to work out what viewing demographic was being targeted. Are there really people in Australia who found it funny, who didn’t cringe and leave the room? All those billions on public and private education so that we can appreciate such idiocy! But apart from the nonsense, should we not feel uneasy that the Prime Minister of our country is held up to ridicule by a publicly-funded organisation and that the core of the ‘comedy’ is the fact that she is a woman in a de facto relationship?

I do not wish to tell feminists their job, but surely they ought to be making some noise about the personal nature of the attacks on the Prime Minister. Is it possible that Tony Abbott exudes some kind of sex appeal, some mysterious pheromone that makes him attractive to women? Would feminists really prefer Tony Abbott to be the person who represents this country to the world?