The Privileges Committee issues a reprimand to Craig Thomson for pointing out in Parliament that Michael Williamson, Kathy Jackson, Michael Lawler and Marco Bolano were all very likely to be crooks. Peter Wicks reports.

IT'S SOMETIMES referred to as “Cowards Court” for the way it allows its members to make unsubstantiated claims without the possibility of legal recourse by the other party. I am, of course, speaking of Parliament House and the often liberal use of parliamentary privilege by MPs.

Members seen to be abusing the system are referred to the Standing Committee Of Privileges and Members’ Interests. MPs thought to have abused parliamentary privilege may be referred to the Committee to have their actions reviewed by a and, if they are deemed to have infringed, be handed a suitable punishment.

This morning, the findings of this Standing Committee will be handed down to Parliament after its lengthy analysis of one particular address to parliament by one former MP.

That former MP is Craig Thomson, whose lengthy address to parliament included allegations of some dodgy practices by several people and how some of them may have related to allegations against him.

So shocked and appalled at bringing into disrepute persons Coalition MPs, such as Tony Abbott and Christopher Pyne, had praised as “decent, brave and revolutionary”, the Coalition went to great length of making a parliamentary apology for any stress and damage to reputation that Thomson’s words may have caused.

So what has become of these good folk that Thomson apparently "defamed"?

Kathy Jackson is under investigation for approximately $1.4 million she is alleged to have misappropriated from the HSU members she was supposed to protect.

Michael Lawler has been forced to step down in disgrace from his Tony Abbott appointed position as a vice president of Fair Work Commission after the Senate held an independent inquiry into his behaviour.

Marco Bolano has disappeared from public view, but is alleged to be under police investigation for fraudulent workers compensation claims.

Michael Williamson, whom I don’t believe was part of the “Get Thomson Campaign” is, however, sitting in a Cooma jail cell for his behaviour in relation to the running of the NSW branch of the HSU. These are the people the current Government instantly leapt to defend.

So what was the Standing Committee’s recommendation?

Here it is in full:

"The committee acknowledges and endorses the consistently held view that the privilege and contempt powers of the House should be exercised sparingly. In this case, the committee acknowledges Mr Thomson’s difficult personal situation in all the circumstances since the allegations about him first arose in the context of the HSU exit audit in 2007-8. These difficulties continued over a sustained period of pressure through various official investigations, reports and legal matters. In recommending punishment, the committee considers these difficulties to be a mitigating factor in what it now recommends. A finding of contempt by the House, and the condemnation that this would embody, in itself would be a very serious sanction. The committee considers that an appropriate penalty would be for the House to reprimand Mr Thomson for his conduct."

It is no wonder that this finding is being handed down in a week where it will likely be lost in all the media surrounding the possible Double Dissolution and Greens/Liberal alliance. 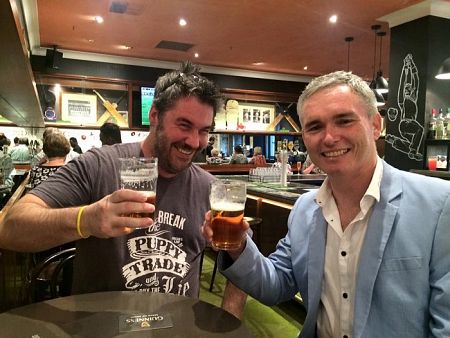 I asked Thomson just how much he was reeling when I caught up with him recently to commiserate about the resignation of Michael Lawler.

Thomson’s response had more than a touch of tongue in cheek to it:

"I apologised to Parliament for pointing out that Michael Williamson, Kathy Jackson and her partner Mr Lawler, and Marco Bolano were all likely to be crooks.  As I have discovered, Parliament doesn't want to hear the truth, instead preferring the lies and deceit of modern party politics.  Whilst I stand by every word of my speech, I understand that Parliament having issued a formal apology to Kathy Jackson, Michael Lawler, Michael Williamson and Marco Bolano needed to keep true to their discredited version of events."

If the Standing Committee are there to ensure members of parliament are being honest in their statements to Parliament, and not misleading the House, I wonder when Christopher Pyne and Tony Abbott will be before them for their injudicious statements about Kathy Jackson.

MEANWHILE, ON THE NSW SOUTH COAST...

Meanwhile, on the NSW South Coast, things continue to become even more bizarre at the Jackson/Lawler home.

Recently, of course, we had a death of a mental patient at the home after neighbours reported a party. Now, in something that I’m sure must make the neighbours sleep with one eye open, there is a new houseguest on the scene.

That guest is a new friend of Michael Lawler’s and his name is Kingsley John Kraschnefski.

Kingsley is a former soldier who was before court for allegedly threatening behaviour towards a female Defence psychiatrist. These allegations include texts and phone calls, and in the end his psychiatrist took out a protection order she was so scared of him. Remember, this is a medical professional, not some bitter former lover.

Kingsley has allegedly claimed to be a sniper and is also alleged to have claimed he still has weapons hidden somewhere. A comforting thought indeed for local residents.

Given the events surrounding the lives of those who have lived, and died, in the home of Jackson and Lawler, I have one piece of advice.

Look who has just moved into the Lawler Jackson house. https://t.co/t9BH1GAyhl The neighbours must be delighted! pic.twitter.com/ArzgAw8sJh