Fairfax revenge: The Age attacks — and airs its political bias in Melbourne Ports

A dispute over the erection of campaign bunting and corflutes on the eve of a Federal election is nothing new — so what is behind Fairfax publishing four articles on one such incident, even giving one article front page status? Peter Wicks reports

VICTORIA POLICE reportedly received many complaints on election eve, however one in particular caught the attention of The Age reporter Nino Bucci.

No charges were laid on any of the men involved and no further information has been sought from them by police.

Video footage of the four men getting in a vehicle and driving off was supplied to Fairfax, apparently to prove the guilt of the men. All the video proved, however, was that some men got in a SUV and drove away — something that can be witnessed at any hardware store car park on any given day. The other thing the video clearly shows is that two men, who identify themselves in the video as a Liberal Party volunteer and a Greens Party volunteer, have no problem screaming out swear words in the middle of a quiet neighbourhood in the night while children sleep nearby.

I would be surprised if box cutters were not found in a vehicle being used by those erecting signage at polling booths, they are standard items in any election booth kit for any political party. What was alarming about the police search of the vehicle is that it did not find any evidence of the Liberal and Green’s election material they were accused of tearing down and making off with.

The cameraman on the evening was allegedly a man named David Van and he was putting up bunting for the Liberal Party.

David Van is a lobbyist for the gas and coal industry and a former big tobacco lobbyist. Currently he has his own firm: De Wintern Group.

Despite not being a political party, registered charity or member of AMSRO De Wintern Group was responsible for thousands of robo-calls in the Melbourne Ports electorate that were targeting Labor Member Michael Danby. The legality of these robo-calls is questionable at best and it is understood Labor are considering referring the matter to the communications regulator ACMA or Federal Police as a possible breach of the SPAM Act and Privacy ACT.

Some may suggest that a tobacco and fossil fuel lobbyist shaking hands with a Green and both swearing in a public street in the middle of the night may be the real story here, but Nino Bucci chose to leave out these details out of his reports.

The electorate where this occurred was the hotly contested seat of Melbourne Ports, a bitter three-way battle for a seat that Labor has held for over a century. The perceived ugliness of this alleged vandalism prompted failed Greens candidate Steph Hodgins-May to say to Fairfax

"I'm just disappointed for the voters of Melbourne Ports who have to be starting to get used to this flavour of campaign from Mr Danby."

This from a candidate whose partner Ogy Simic was seen at pre-poll hiding behind trees and filming voters as they arrived for reasons unknown. Steph Hodgins-May had also faced criticism for boycotting a candidates forum sponsored by a Jewish organisation.

The guy standing next to Ogy in the pictures was seen in a car with the number “GAMER” was allegedly witnessed tearing down the ALP's bunting and signs at Port Melbourne's Port Philip Specialist School. In a show of bipartisanship, he left the Liberal Party campaign material untouched.

Ogy Simic photographing voters as they arrive at the polling booth, accompanied by his friend "GAMER" (Image supplied)

So why the heavy and one-sided coverage from the Age and Bucci?

The answer relates directly to the flavour of political campaigning we have come to expect from the Greens.

During the Victorian 2010 State election campaign. it was discovered that the Labor database full of confidential correspondence and personal details of voters had been illegally accessed, and voter records illegally viewed or copied.

It would appear that a Labor laptop was stolen during the campaign by someone impersonating a Labor volunteer. That laptop then ended up in the hands of former Greens councillor and Greens endorsed State candidate Fraser Brindley.

From there, the login was used from the offices of The Age, clearly supplied by Brindley or an associate.

The information gathered from the crime was then illegally used in an article written in The Age to, seemingly, assist the Greens State campaign in the inner city.

Four people were charged, and in court admitted criminal behaviour and pleaded guilty over this matter — the Greens' Fraser Brindley and, from Fairfax, Royce Millar, Ben Schneiders and Nick McKenzie.

The reason these charges were laid was because the story of the illegal theft and cyber-crimes was broken on the website Vex News and written by Andrew Landeryou, one of those in the vehicle on election eve.

These multiple reports of an incident dismissed by police without charge may seem to some as little more than payback from those at Fairfax. That Fairfax would allegedly dedicate its front page to petty payback for someone who reported on illegal activity by its own employees is really quite disturbing.

The articles involving Mr Landeryou were enthusiastically tweeted out by some of those journalists whose crimes Landeryou exposed soon after publication. 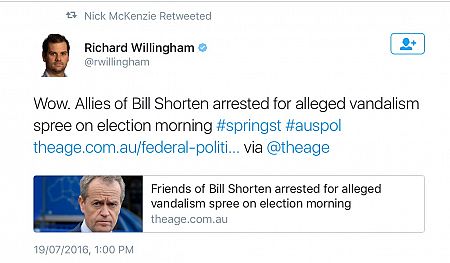 In an email response to my questions, Nino Bucci told me that he was in no way put up to doing these stories by any of his colleagues.

Bucci also claimed he did not obtain the video of the late night swearing session from directly from David Van, although he didn’t deny that Van was the one that took the footage.

The Greens appear to have strong ties to certain elements of Fairfax. During the campaign Fairfax published polling paid for by the Greens — polling nobody else would take seriously. That polling suggested a win was possible in Batman, and possible wins in Wills, Melbourne Ports, and Higgins. Reading Fairfax the Greens were going to at least pick up one lower house seat, although of course in the end they picked up none, despite the misleading reports, thousands of volunteers and huge spend on advertising, not to mention a woeful campaign by sitting Labor member David Feeney in Batman.

Even after voting was finished and counting showed it likely that Michael Danby would retain his seat, Fairfax were still talking up the possibility of Hodgins-May winning. Michael Danby has since claimed victory in this seat.

Perhaps if journalists at The Age concentrated on the reporting stories instead of becoming the story we wouldn’t have to worry about personal grievances being splashed across its pages instead of stories of interest and/or crimes.

Whether those crimes involve Greens candidates and The Age journo’s or not.

Anyone with a subscription to Crikey may like to reconsider #auspol @crikey_news Someone's feeling threatened... pic.twitter.com/U6UGhHGEQ6

Get the truth behind the spin. Subscribe to IA for just $5 (or less).