IA finally uncovers the Integrity Commissioner’s advice relating to ‘Mermaid’ Ray Stevens and his controversial Skyride project — and an IA investigation suggests he may have misled Parliament over its contents. Managing editor David Donovan reports.

This is the very same report Stevens told Parliament on 30 October 2014 had given him a “clean bill of health” regarding any conflict of interest concerns.

The same report that, prior to the January 2015 election, Ray Stevens repeatedly refused to disclose to the media or even discuss. The very same one I was persistently asking Stevens about when he did his infamous chicken dance around me outside a Gold Coast pre-polling booth in January this year.

Here's what I was trying to talk to Mermaid Ray Stevens about. My previous story, the Integrity of Mermaid Ray: https://t.co/JzJv1gmUQe

And the same report Queensland Premier Annastacia Palaszczuk was again asking Stevens about in Parliament in the very first Question Time of the new Parliament last month.

In a fiery start to the first Question Time of the new State Parliament, the Premier took aim at Mr Stevens over his links to the Gold Coast Skyride project.

During the tense stand-off, she demanded Mr Stevens ­release the report

“If you have nothing to hide, release the integrity ­advice. Where is the advice?” she said.

“If those opposite want to talk about standards, will the Leader of the Opposition ask the Member for Mermaid Beach to now table that ­advice?

“The Member for Mermaid Beach should table it.”

Mr Stevens objected to the verbal attack, calling it “offensive” and told the House that Channel 9 held a copy of the report, sparking another war of words.

Ms Palaszczuk insisted the report should be made public.

“Guess what? The House does not have it.

“If he has nothing to hide, he should release it publicly ... the standards apply to those on that side of the House as well.”

After following this up with Channel Nine, IA received this report from them last week. It seems Nine had been in possession of it for at least a month without releasing it to the public — or anyone else. I’ll be discussing the perplexing behaviour of Channel Nine News in a later piece.

Once the advice came into our possession, we promptly undertook a detailed investigation into the details contained in it, including a comprehensive analysis by barrister Alex McKean.

Our conclusion was that Ray Stevens may have misrepresented the Integrity Commissioner’s advice to both Parliament and the public prior to the Queensland election. This may explain why he was so desperate to not release the report or discuss it prior to the election. It may also explain why he refused to answer my questions outside a Nobby Beach pre-polling booth in January — preferring instead to act the fool and wave his hands in my face.

We can now release the Integrity Commission advice to Ray Steven’s to the public for the first time.

You can open it in full as a PDF by clicking on the image below. 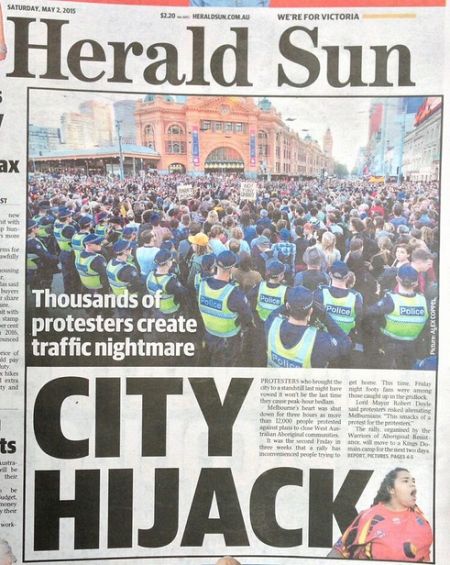 The long awaited Integrity Commission  advice for Ray Stevens, released to the public for the first time by IA. [CLICK HERE TO READ THE ADVICE IN FULL AS A PDF]

Let’s go through some of the interesting aspects of Alex McKean’s analysis, which was published today at the same time as this report.

It appears Stevens may have made use of this loophole in the powers of the Integrity Commission to misrepresent the true extent of his involvement in the Gold Coast Skyride project, along with other pertinent details.

But even in ruling on the inaccurate and incomplete information, Integrity Commissioner Richard Bingham did not award a “clean bill of health” like Stevens had trumpeted, but rather a tepid, equivocal approval, littered with qualifications and provisos. 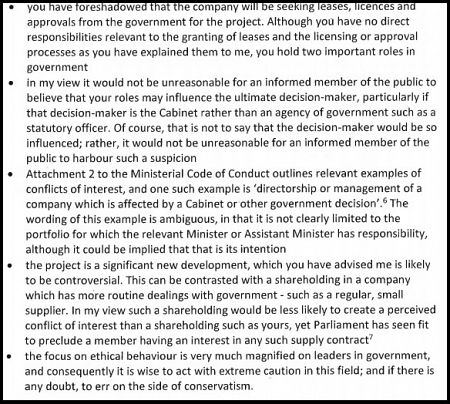 Does this look like an unqualified sign-off by the Integrity Commissioner? CLICK HERE TO READ THE ADVICE IN FULL AS A PDF]

As Alex McKean says in his analysis [IA emphasis]:

… it appears from the advice that Mr Stevens did not provide accurate information to the Integrity Commissioner regarding the state of his interest in the cable-car project at the time he sought the advice in September/October 2014. To the extent this is correct the advice itself, which does somewhat equivocally approve Mr Steven’s involvement in the project, is called into question.

Moreover, according to McKean, Stevens did not inform Commissioner of his activities with respect to the project whilst occupying a very senior role in the Government [IA emphasis]:

While it is true Mr Stevens did seek advice from the former Integrity Commissioner in 2012, he apparently did not seek updated advice as to the impact of his being an Assistant Minister until October 2014. That was in the circumstances where he was appointed that that role two years earlier and had set up Neranwood Pty Ltd (now Gold Coast Skyride Pty Ltd), as a vehicle for the cable-car project, in October 2013.

In reaching the conclusion that Mr Stevens could retain his shareholdings in October 2014, the Integrity Commissioner considered that, as assistant minister for e-government, Mr Stevens did not have any direct portfolio responsibility for matters such as the cable-car proposal. Mr Bingham said any conflict of interest could therefore only arise with respect to the ‘broad public trust’ Mr Stevens had assumed as an assistant minister.

…. Mr Stevens had already been involved in bringing legislation to the House, and voted on it, where it would make his pet cable-car project more likely to be approved, by changing the objects of the Nature Conservation Act 1992 (Qld), and making it more likely to attract investors, and hence more lucrative, by introducing 30 + 30 year leases for such projects.

IA’s conclusion is that Ray Stevens may have misrepresented his affairs to Queensland’s Integrity Commission and misled Parliament – and the public – about it clearing him from any conflict of interest concerns. It was only after significant public pressure that Stevens decided to release the report to a single media organisation ‒ one, perhaps, he had reason to believe would not pursue the matter ‒ after the election.

We urge the Queensland Parliamentary Ethics Committee to investigate the conduct of one of its members — one who has an obvious and distinct conflict of interest that it would appear he tried to conceal through smokescreens, misrepresentations and strange silent dances.