With Kevin Rudd back at the helm, the Liberals are headed for an historic defeat and oblivion thereafter, says Bob Ellis. 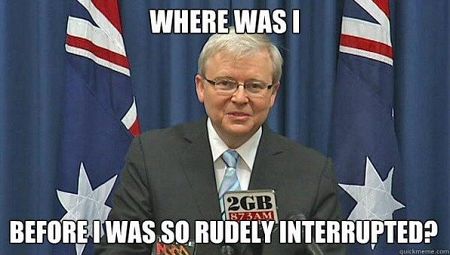 WHAT HAPPENED was this …

… Keating, because of "the recession we had to have", a bullying parliamentary style and a belief that mild-mannered Howard would change nothing but govern more ably, lost power in 1996.

Bound for a drubbing in 2001, he was saved by 9/11 and a world war and the myth of ‘the Taliban on the Tampa’ and narrowly survived.

Latham’s violent history, bullying style and firm handshake, and a timber workers’ rally in the last week saved him again in 2004.

In 2007, Howard’s underlying unattractiveness and sneaky unfairness did for him, and he lost his seat.

Rudd, winning, seized more power than Labor liked, and, after ill-treating his ministry and caucus, was, in a bad patch, after the roof batts, and a baseless panic by the nervous Arbib and Bitar, was overthrown.

She then, with skilled negotiation, retained government but lost credibility by some undertakings, necessitating broken promises, that secured her numbers. Abbott then sought those numbers by trying to drive Slipper and Thomson to suicide, expulsion or resignation and, with Murdoch’s daily help, and his fabricated polling, attacking the character of Gillard and her sexual history.

Her vote never fell below 45.5 per cent 2PP, but Newspoll ‒ ringing geriatrics on landlines and redistributing Katter preferences as if they were Family First ‒ said it did, sometimes as far down as 41.

Three-quarters of a million Labor voters had meantime, however, become ‘undecided’. This was because of ethnic men who resented a powerful woman, ethnic women who disliked an adulteress, religious people who hated an atheist, and shotgun-wed women who envied and cursed a woman who lauded abortion. This accounted for the Labor vote of, occasionally, 45.5.

But Abbott’s macho shiftiness and ceaseless whingeing, and his reputation for physical violence, repelled many women, and he began to be unelectable when his policies – on broadband, on Gonski, on the very fast train, on a Budget surplus – proved to be idiotic. He was propped up, however, by Gillard’s speaking style, which was ugly and unconvincing, and Newspoll’s deliberate fraudulent exaggerations of his party’s vote which, after five million voters ceased to use landlines, grew huge.

Rudd then regained the Labor ‘undecideds’ and hit 52.8, the number he was first elected by, and has been there ever since.

It is likely, however, that his handling of boat people, and Morrison’s madness, and Abbott’s increasingly amazing refusal to debate, will win him half a million more votes by October, and he will win, as I predicted, by 56.8 per cent and end the Liberal Party as a force in Australian history.

This is the story so far.

‘Brand Labor’ was never in trouble, but several of Gillard’s qualities made it seem so when these were exaggerated by Murdoch pollsters and believed by Labor backroomers.

There is no Howard nostalgia, Downer nostalgia, Hewson, Peacock, Fraser, Snedden, McMahon, Gorton, or Holt nostalgia for Abbott to draw on, and only the Menzies voters, dying as we speak, will stay with him in any numbers.

The Liberals are headed for an historic defeat and oblivion thereafter.