WELL, what an election result we have seen so far.

Bill Shorten acting victorious without being able to claim victory.

Malcolm Turnbull ranting and raving about being robbed despite looking like he will remain PM.

Richard Di Natale trying to pretend that not gaining a single member in the House of Representatives and losing one in the Senate is a positive thing.

And the country is left scratching its collective head.

There is no doubt that Bill Shorten is a winner and the Labor Party are back in a major way. However there were some real winners. Derryn Hinch is a winner but the two really big winners of the weekend were most certainly Nick Xenophon and Pauline “Xenophobe” Hanson.

There were sad losses from the parliament from some hard-working and honest members which is always unfortunate. Luckily for Malcolm Turnbull, though, none of these were Liberal Party members. The members the Liberals lost were obviously just dead wood using up valuable office space and oxygen in parliament. I assume this as if they were of any use Turnbull would have acknowledged them in his speech on Saturday night.

Instead, Turnbull kicked off the blame game and his speech rapidly descended into an infantile spray.

The man leading the party systematically taking Medicare apart blamed Bill Shorten and all those naughty remarks about Medicare. Turnbull was sure the police would look into it — after all, he managed to have Labor Party members' residences raided before.

The man whose own budget takes a wrecking ball to Medicare services forgets what a liar looks and sounds like.

Of course, the Greens don’t have a seat in NSW so Labor members didn’t need to win back anything from the Greens at all.

Bill Shorten has also blamed Labor for the result, citing a strong campaign team, excellent policy released well ahead of time, and a united team.

In fact, the only politicians not blaming Bill and Labor were the Liberal Party members who have been lining up to slam their own leader.

Never ones to let an opportunity slip, however, News Corp have found someone else to blame for Labor not quite making it over the line ahead of Turnbull.

The Herald Sun want everyone to know that if it wasn’t for Victorian Premier Daniel Andrews and his issues with the CFA, Bill Shorten would have cleaned up and would right now be watching removalists carrying his favourite armchair into The Lodge.

So convinced of this were the Herald Sun that they ran a story detailing how it impacted the result by talking to voters in several electorates. 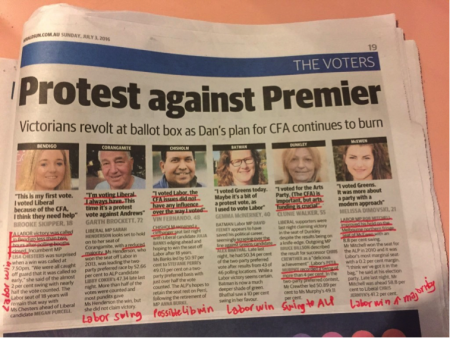 These included (election results via ABC):

Bendigo — (Labor) Labor won this seat so the impact was negligible.

Chisholm — (Undecided) Spoke to a Labor voter who said it had no impact.

Batman — (Labor) Spoke to someone who voted Green who did not mention the CFA but did mention David Feeney.

Dunkley — (Liberal) Spoke to a woman voting for the Arts Party.

McEwen — (Labor) Spoke to a Greens voter and again CFA not mentioned.

Six seats, two as yet undecided and three with Labor ahead — Daniel Andrews must be racked with guilt.

The fact is, as much as the Victorian Liberals and News Corp don’t like it, the CFA issue has little impact. The epicentre of the CFA Liberal beat-up was in the seat of McEwen which saw a swing against the Liberals of 7.18 per cent.

Another seat which saw Julie Bishop attending a CFA protest event, was the marginal seat of La Trobe. This seat also saw so many fake CFA members in phoney uniforms attend polling booths supporting Liberal MP Jason Wood, that Upper Ferntree Gully CFA felt inclined to make a public statement on their Facebook page about the impersonators. The result: a swing of 3.08 per cent to Labor.

Don’t get me wrong though, I’m not saying that the Premier was not responsible for the election result. I just think it’s the wrong Premier in the wrong State.

In NSW, we saw Sydney’s West shed Liberal MPs like a snake shedding dead skin. In fact all over the State, Liberals are falling like ten-pins in a Michael Moore movie.

Although this has predominantly come down to great campaigning by NSW Labor, now under new management, a large portion of the credit for this has to go to Premier Mike Baird for the attack on democracy that are his council mergers.

Baird’s decision to shut down councils and sack democratically elected mayors and councillors and replace them with his own people, enraged the state. So much so, that the first meeting of one of these “Super Councils” had to be shut down and the riot squad called in, as it was besieged by protestors.

The ongoing protests regarding Baird's council mergers have been a thorn in the side of the Liberal Party for the best part of a year now. In fact, they are probably less a thorn and more a broken schooner glass.

The extent of Baird’s damage to the Liberal Party's federal campaign may never be known. However, The Australian have put it at least three seats.

No matter who you blame for the election result, Malcolm Turnbull was right about one thing — he did put his best foot forward.

Turnbull’s decision to call a double dissolution may not have handed him the Senate he desired but it certainly left him with the one he deserved.

It's almost gotten to the point where the only jobs for Australians without tertiary qualifications are in the Senate.#4Corners

Turnbull's credibility is now in tatters. Don't blame a 'scare campaign', this is a rejection of his policies https://t.co/qM1956xvex