EDITORIAL EXCERPT: The Barnaby Joyce affair — another case of #mediafail (except for IA)

The New England by-election safely over, Australia's biased and complicit mainstream media have finally lifted the lid on Barnaby Joyce's affair with a young staffer and her pregnancy.

Of course, this was something Independent Australia readers read about months ago.

Independent Australia was alone amongst Australia’s popular media in reporting these facts, which Ross Jones did on 19 November last year, after going to Tamworth for IA to investigate these and numerous other rumours swirling around the then candidate. With most of his electorate being oblivious to any of the scandals, Joyce went on to win the 2 December New England by-election,

The news was "broken" ‒ if such can be said about old news long in the public domain ‒ by Sharri Markson yesterday (7/2/18) in the Daily Telegraph. It was soon followed by reports in all the other Murdoch-owned publications.

‘Deputy Prime Minister Barnaby Joyce is expecting a baby with a former staff member,’ wrote Markson in a frontpage splash.

‘Mr Joyce has refused to comment on his relationship with ex-journalist Vikki Campion, 33, since it emerged last year that his decades-long marriage to Natalie Joyce, the mother of his four kids, had broken down.’

Markson then offered a positive twist on the affair:

‘… friends say the new couple, who are living together, are madly in love.’

Because nothing says romance more than a powerful man cheating on his wife and knocking up an employee young enough to be his daughter.

Joyce is the same man who called same sex marriage “decadent” last year, while campaigning for a “no vote” in the postal plebiscite.

He also said that marriage equality would leave his daughters at risk:

"We know that the best protection for those girls is that they get themselves into a secure relationship with a loving husband, and I want that to happen for them. I don't want any legislator to take that right away from me."

His right, note, not that of his daughters. A remarkable stance, given no marriage is secure with "decadent" individuals like Joyce around. 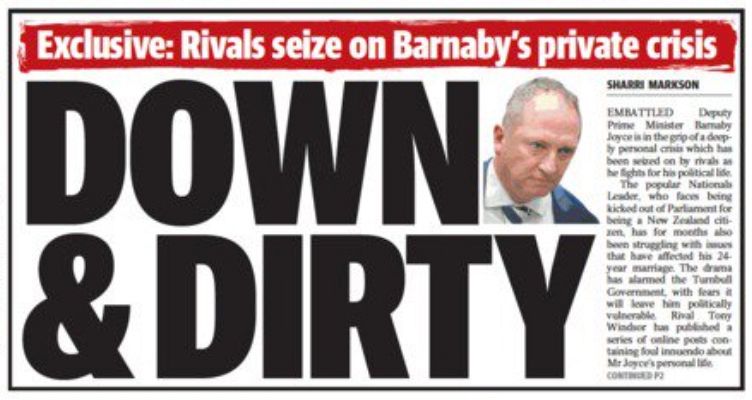 The tone of Sharri Markson’s recent article was notably different to one she wrote for the same paper on 21 October last year, entitled ‘Barnaby Joyce battles vicious innuendo as Coalition fears citizenship woe’.

Tony Windsor is “showing himself to be a bitter old bastard”, a Nationals source said.

Windsor, of course, was simply telling the public the straight truth — something Markson and her Rupert Murdoch-owned publication find impossible to do.

There is no doubt Markson knew the truth in October. Vikki Campion was a former colleague of hers, having worked as the deputy chief-of-staff at the Daily Telegraph prior to becoming Joyce’s press officer. So, why did Sharri Markson not only conceal the facts, but attempt to discredit them as “vicious innuendo”?

One possible explanation is that Markson and her politically partisan publisher were concerned Joyce might lose the New England by-election and put their friends, the Liberal Party Government, at risk.

Markson alluded to this in her October article:

A senior Nationals source said there are concerns over a scandal in Mr Joyce’s personal life and a dirt-file upsetting the conservative voters….

“The party is worried. Concerned. You can’t afford to lose a seat even if it’s New England when there’s a one-seat majority …."

Another Nationals source said Mr Joyce’s strategy was to ignore Mr Windsor, but admitted it was worrying given the conservative electorate….

That explains News Corp’s abysmal contempt for the public’s right to know — but what about the rest of the mainstream media? And there can be no doubt they also knew — we confirmed that with them directly.

Guardian Press Gallery columnist Katharine Murphy tried to explain the media silence in a Tweet on the day Markson’s original story came out:

‘There's something of a convention in Aus politics: unless there's criminality, coercion or abuse involved, private lives are private.’

1. There's something of a convention in Aus politics: unless there's criminality, coercion or abuse involved, private lives are private.

This is nonsense, of course. There is no such convention — “something” or otherwise.

The media presented stories about Gareth Evans’ affair with Cheryl Kernot and Jim Cairns’ affair with Junie Morosi when there was not a hint of criminality, coercion, or abuse. The mainstream media also enjoyed reporting on the private life of Julia Gillard while she was prime minister, even outrageously asking her whether her hairdresser partner Tim Mathieson was a homosexual. The ABC then destroyed any notion of impartiality or discretion when it aired a tasteless and unfunny sitcom based on her supposed private life, called ‘At Home With Julia’.

If what Murphy really meant was that there was sort of a convention to only report on the private lives of politicians if it was in the public interest, then the Joyce case clearly was.

Because, as Markson said in her October piece:

‘Mr Joyce, who was married in 1993, is Catholic and has spoken often of his conservative social and economic values.’

So, with a by-election then coming up in December, it was clearly in the public interest – especially to the voters of New England – to know their beloved candidate, who had preached the sanctity of traditional marriage throughout the land, was sleeping around on his wife with a married staffer and producing children out of wedlock.

That he was, in other words, a hypocrite...

This is only half the story! The rest of this editorial, originally published as part of the Independent Australia weekly subscribers' newsletter, may be read in the IA members only area. All you need to do is subscribe to IA. It takes less a minute and costs as little as $5 a month or $50 a year — so little for such an abundance of quality journalism and other great extras!

This piece explains why the Maley piece is not "really good" but, in fact, "really, really bad". When will you MSM journalists start accepting responsibility when you get caught out censoring the news and not doing your job? Disgraceful.hhttps://t.co/xah6QNzIYp