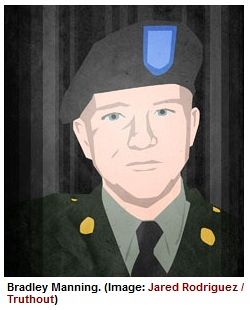 Private Bradley Manning is unlikely to get a fair trial by the US military for handing over classified information to Julian Assange’s Wikileaks, says Ann Wright from War Is A Crime.

On Friday December 16, 2011, 40 supporters of Bradley Manning saw him in person in the military courtroom at Fort Meade, Maryland and another 60 saw him on a video feed from the court — the first time Manning has been seen by the public in 19 months. Over 100 other supporters, including 50 from Occupy Wall Street who had bussed down from New York City, were at the front gates of Fort Meade in solidarity with Manning.

Hundreds of supporters gathered today, Saturday, December 17, for a large rally and march.

For his first court appearance, Bradley was in what looked to be a new military uniform and typically military, he had a fresh haircut. He was not in shackles in the courtroom, but it appeared in a photo that he was shackled in the van that brought him to the court. Manning talked freely with his civilian defence counsel and his two military legal counsels.

He did not turn around and look at the people in the court, but as he was brought in and taken out during the various recesses of the court, he no doubt noticed supporters in Bradley Manning t-shirts.

Bradley Manning has been imprisoned for 19 months, since May, 2010, without a trial.  Yesterday, December 16, 2011, an Article 32 hearing began at Fort Meade, Maryland, in which an investigating officer will determine whether there is sufficient evidence of the crimes with which the military has charged him for the case to be referred to a General court-martial.

In July, 2010, Manning was charged with transferring classified information onto his personal computer and communicating national defence information to an unauthorized source.  22 more crimes were charged in March 2011, including "aiding the enemy," a capital offense.  Defense Department prosecutors said they would not seek the death penalty. In April, 2011, Manning was found fit to face a court martial.

On Friday, December 16, Manning’s civilian lawyer, David Coombs challenged the impartiality of the investigating officer US Army Reserve Lieutenant Colonel Paul Almanza, citing Almanza’s civilian employment as a lawyer in the Department of Justice which has conducted investigations on Manning, Julian Assange, and Wikileaks. The defence team had requested that 38 witnesses be allowed to testify in the Article 32 hearing. Coombs also said that the decision of Almanza to allow only two defence witnesses other than the 10 the prosecution wanted demonstrated a bias by Almanza.

“That simple fact alone, without anything else, would cause a reasonable person to say, ‘I question your impartiality.’?”

Stating that his office of child exploitation in the Department of Justice had nothing to do with the Wikileaks investigation or with national security issues, Almanza denied Coombs’ request for recusal.

“I do not believe a reasonable person, knowing all the circumstances, would be led to the conclusion that my impartiality would be reasonably questioned.  I thus deny the defence request to recuse myself.”

After that, Coombs filed a writ with the Army Court of Criminal Appeals to stay the proceedings until a decision can be made on whether Almanza should continue to preside. According to military law experts, the hearing can proceed while the appeals court makes its determination.


Manning under harsh imprisonment at Quantico reeked of intimidation and retaliation

The military’s treatment of Manning has reeked of intimidation and retaliation.

Until citizen activist protests six months ago in March, 2011, brought sufficient attention to the harsh conditions of his pre-trial confinement, the US military was treating him as if he were beyond the scrutiny of the law — as if he were an "enemy combatant" in Guantanamo or Abu Ghraib. Amnesty International and the United Nations Special Rapporteur on Torture expressed great concern about the conditions under which Manning was being held — in a maximum-security, single-occupancy cell, placed on a prevention-of-injury order and allowed to wear only a suicide-proof smock at night.

On July 12, 2011, Juan Mendez, the United Nations Special Rapporteur on Torture, stated that it was "vital for him to have unmonitored access to Bradley Manning."

"I am assured by the US Government that Mr Manning's prison regime and confinement is markedly better than it was when he was in Quantico, however, in addition to obtaining firsthand information on my own about his new conditions of confinement, I need to ascertain whether the conditions he was subjected to for several months in Quantico amounted to torture or cruel, inhuman or degrading treatment or punishment. For that, it is imperative that I talk to Mr Manning under conditions where I can be assured that he is being absolutely candid."

At the request of Mr Mendez and after several meetings, the US Department of Defense said it would allow him to visit Mr Manning, but warned that the conversation would be monitored.

Mendez said such a condition violated long-standing rules that the UN applies for prison visits and for interviews with inmates everywhere in the world. On humanitarian grounds and under protest, Mr Mendez, through Mr Manning's counsel, offered to visit him under these restrictive conditions, an offer Manning declined.

"The question of my unfettered access to a detainee goes beyond my request to meet with Mr Manning — it touches on whether I will be able to conduct private and unmonitored interviews with detainees if I were to conduct a country visit to the United States."

Additionally, Mr Mendez has requested several times since his appointment in November, 2010, that the US Government allow him to visit the US military prison at Guantanamo Bay, Cuba. However, the US government has not responded to his requests.

The federal courts have long established mechanism of dealing with classified information in national security cases.

The military’s contention that it took 19 months to figure out how to try him while protecting classified materials reeks of intimidation, retribution and retaliation.

(This story was published in Truthout on 17 December 2011 and has been republished under a Creative Commons licence.)