A FEW WEEKS AGO, I wrote an article about the small NSW town of Finley and how Banksia Park Puppies, one of Victoria’s largest puppy factories, has had a development application put through in an allegedly improper manner.

In that story, I touched on the Council's attempts to remove the town's beloved War Memorial Hall with the aid of prominent citizen Ross Whittaker, who is the brother of local puppy factory operator Pam Edwards.

Currently, Wixxyleaks has a freedom of infromation (FOI) request that seeks clarification and documentation on a number of issues, which has been accepted as valid by Berrigan Shire Council. I will address this when I have received further information from Council.

To give you an idea of the way this Council and its operatives work, I will give readers a run down on it and Ross Whittaker’s endless agenda to destroy the Finley War Memorial Hall.

Pam Edwards is not only Whittaker’s sister, she and Whittaker are also relatives of the Hams family who own Banksia Park Puppies. This puppy farm has caused community outrage and the owner, Matt Hams, is currently the lead lobbyist seeking to have the Labor legislation voted down. It has seen him and his puppy factory fleeing over the border to Finley.

The Finley War Memorial Hall adjoins the School Of Arts, which is a heritage listed hall, as opposed to a school. The two halls have a common annexe that runs between them. 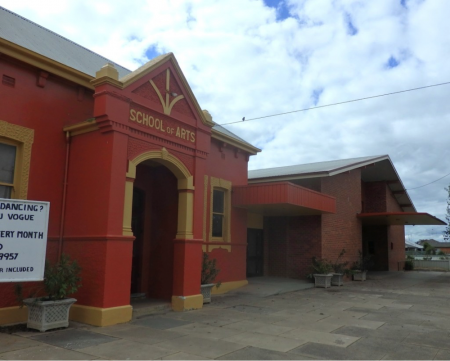 Finley School Of Arts and War Memorial Hall with the anexxe between them.

Ross Whittaker is president of the Finley Hall Committee, meaning he is caretaker and operator of all halls in Finley. Whittaker is also treasurer of the Halls Committee.

Under the Registered Organisation Act 2009, it is a breach to hold these two positions at the same time. Other sections of the Act that appear to have been disregarded are the access to minutes of meetings, public notification of AGMs and the applications for new members. Whittaker allegedly runs a closed shop in this regard and maintains complete control.

By no coincidence, Whittaker also heads the Finley Amateur Dramatic and Musical Society (FADAMS). FADAMS operates out of the smaller School Of Arts hall and puts on one stage production per year.

Whittaker and the council have been trying to persuade the Finley residents that their plans to expand the School Of Arts and improve its facilities is preferable to keeping the War Memorial Hall.

They have failed. Spectacularly.

When the Council held a public meeting to proudly display their plans for the site, which included the demolition of the War Memorial Hall, it was to be a proud moment for the Council. Berrigan Council paid an external PR firm to talk up and present the plans, Ross Whittaker and his supporters were there to cheer and clap at the right time and the council were mighty excited that the community were going to come on board with the plans.

These plans included a car park in place of the hall, which would provide parking for 13 vehicles. This lucky number perhaps is indicative of the level of community excitement for Whittaker’s amateur drama productions. 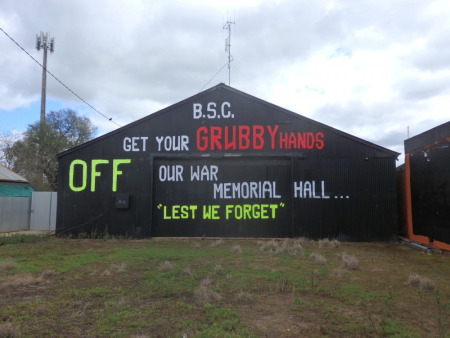 Finley locals have made their views pretty clear.

Unfortunately for the council, approximately 85 per cent of those who attended and were supposed to be cheering, ended up leaving in disgust instead.

Council also ignored a petition with approximately 1,500 signatures seeking to ensure the War Memorial Hall wasn’t going to be left a pile of rubble.

It is important to note that drama is not only important with Ross Whittaker, two prominent Berrigan shire Council employees are also involved in the Berrigan Amateur Dramatic Society. Matthew Hansen, director corporate affairs and Camillus O’Kane, the town planner.

An earlier attempt to demolish the hall was due to an alleged white ant infestation. Now, those in the pest control game would know what a serious issue white ants are, but they may not be aware of the Finley White Ant.

The Finley White Ant is a cunning little devil. It is a highly intelligent species of white ant that knows when it infests two adjoining buildings, to do only minor damage to one building and catastrophic damage to the other — thus rendering one building worthy of expansion and the other only fit for demolition.

The people of Finley for some reason were not convinced by this and the white ants moved out of town suddenly.

Whittaker penned an open letter, published in the Southern Riverina News, which provided details of the levels of utter incompetence in the halls management. This letter and spin are part of his pitch to have his $380,000 proposal on the site's revamping put into action.

If Whittaker is to be taken at his word regarding this incompetence, then he forgets that all of the incompetence is his own. He is the president of the Hall Committee and he is also the treasurer. Given his own reporting of his own failures running the hall, it would take someone pretty special to desire to see $380k of ratepayer’s money spent on his plan. 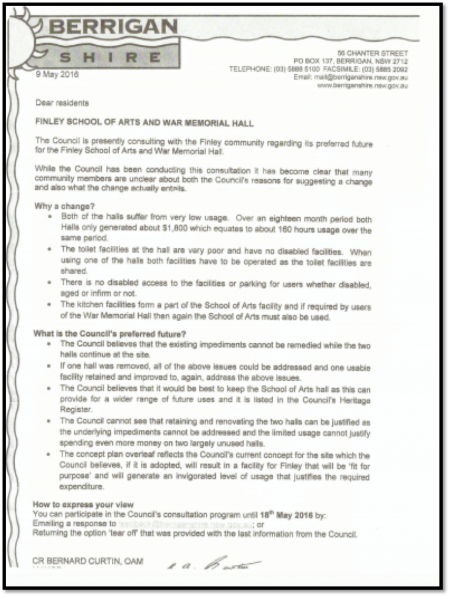 A letter to residents (pictured above) was sent out by the former mayor Bernard Curtin.

The mailout refers to the need for both halls "to be operated" for the War Memorial Hall to have toilet facilities. Operated? There is no machinery involved here. What Curtin means by "operated" is a key turned in a single door and a light switch turned on. Major work indeed.

It also also refers to low usage and low income. Since May this year, there have been four farmers markets in the hall, as it is the only facility in the shire big enough to host this valuable activity for the struggling farming community. It has also been used for private functions, as a venue for a basketball competition with approximately 150 players and by schools for its basketball facilities. Being the only venue large enough, it also recently hosted a footballers' ball, with over 400 attending. If there is any issue with revenue, that aspect has been mismanaged by the Halls Committee headed by Ross Whittaker.

The council mailout also contains the latest tactic in the bid to remove the hall. Disabled facilities.

The plan here is to demolish the annexe between the halls which contains the women’s toilets and the men’s toilets at the back of the hall, and build a new set of toilets adjoining the School Of Arts that include disabled facilities. This plan does not involve the demolition of the War Memorial Hall so the hope is that the community will embrace this as it caters to those with a disability.

However, you don’t need to be the world’s greatest sceptic to see through this plan. 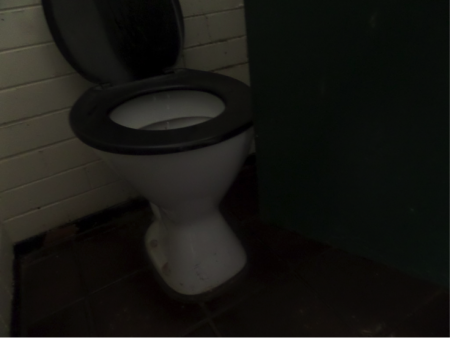 Plenty of room for legs and a wheelchair?

For those who believe this effort may be about looking after the disabled, currently there is a large room which is being used to house an old piano and other bits and bobs that are never used. It sits between the men’s toilet and kitchen so plumbing is not an issue, why not put disabled toilets there?

Instead, Council and Whittaker have the disabled going out the front door in their wheelchairs, perhaps in the rain, to go around the building to use the proposed toilets on the other side.

Council has so much regard for the disabled of Finley that none of the Council public toilets have any disabled restrooms and, having looked inside them myself, none would fit a wheelchair through the cubicle doorways, one you have to squeeze between the toilet bowl and cubicle wall just to close the door.

The public toilets in the park opposite the War Memorial Hall are in such poor condition the Council has had to put a warning sign on them saying their use may be hazardous.

Currently, disabled needing a toilet have to travel about five blocks and go to the RSL Club where after they have gone through the signing in process they can use those facilities.

Finley toilets: Use at your own risk.

Still, it is easy to understand why the Council haven’t had any money to spend on disabled facilities — after all, there have been far more important things to spend money on. Things such as lobbying and drawing up plans to remove a hall built in memory of those who gave their lives so that we could have things like drama societies — and the much-needed boat ramp near the Berrigan Council general manager Rowan Perkins' home, as the other one further down the street clearly isn’t enough.

This is not about disabled toilet facilities, this is about setting up another reason to tear the hall down.

For the lack of maintenance on the War Memorial Hall, Whittaker’s committee ensured one thing was painted: the sign that stated that the hall is a war memorial hall has been painted over to hide that fact.

However if you, like I do, find that disgusting it gets worse. Two honour rolls have been removed from the hall.

These honour rolls have the names of those from the area that made the ultimate sacrifice for our country. These should not have been removed and their removal shows an utter lack of respect — not only for our fallen soldiers but also their families. To think of these honour rolls sitting in a garage or a closet somewhere collecting dust should enrage anyone who has ever lost a relative in conflict.

Investigate Australia. Subscribe to IA for as little as $5 a month.