DIGGERGATE CAMPAIGN: A call to arms

Retired brigadier Neil Weekes has been spearheading the campaign for fair indexation of veteran’s pensions, which is now finally getting national mass media attention. Here's his call to arms.

We have won Round 1 of this fight. We are united as never before…

The groundswell of discontent, anger and frustration is palpable and continues to grow rapidly in the Defence Community, both serving and ex members, as a result of the Senate’s rejection of the Defence Force Retirement & Death Benefits Amendment (Fair Indexation) Bill 2010. There is also a growing sense of betrayal by our Politicians as, despite this huge outpouring of disgust, they appear to be ignoring our plight….

This unity of purpose would not have been possible without the outstanding support and contributions from you, including hundreds of emails from our serving members.

WE MUST WIN THIS FIGHT FOR ALL PAST, PRESENT AND SERVING MEMBERS OF THE ADF AND THEIR FAMILIES!

There will be attempts by the Politicians, their spin doctors and the media, to divide us to set one group of superannuants against the other.

WE MUST STAND UNITED, AS PEOPLE POWER WITH RESOLVE & COMMITMENT WILL WIN OUT!

This will be a long hard slog and we ask you all to stay the fight.

Please continue to bombard the politicians, especially the ALP members in marginal seats as well as the Greens and the Independent members. Remember to send your letters by registered mail (it does not cost much) as our politicians simply delete emails.  We must retain our professionalism and our integrity so please do not use abusive or inflammatory language as this will only discredit our cause.

In addition, we must undertake an “airwaves war”, prosecuted by everyone contacting their local radio stations and continue to do this daily.

While it is acknowledged that this a difficult request, we need people who are in difficult financial situations and the surviving spouses of DFRB/DFRDB recipients to come forward and speak out. This will mobilize the general community to come out to support our fight for “A FAIR GO.”

Remember the average annual Superannuation “Pension” is a misery $22,559 which is indexed against the CPI, and the spouses of the DFRB/DFRDB recipients only receive 5/8 of this $14,100, which is absolutely appalling.   Some of our members are really doing it tough.


This is a national disgrace and it is time this terrible injustice, to those who have committed 20 years or more to the service of our Nation, often in harm’s way, was set right.

There are so 56,000 DFRB/DFRDB members and it has been estimated that there are approximately 3,000,000 people in the wider Defence community.  This represents approximately 13% of the Australian population, so we have considerable clout at the polling booths, PROVIDED WE REMAIN UNITED.

The economic rationalists will argue that any increase to the Indexation method will create “a huge black hole” in the Australian economy.  The Defence Force Welfare Association (DFWA)  and other people, including Peter Thornton, have repeatedly said that this is garbage!

The DFWA estimates that it will cost approximately $20 million per year. As a percentage of our GDP, this is a miniscule amount and pales into insignificance when compared against the wasted millions of dollars the Government has spent on numerous failed projects.

By now, most of you will know that TESS LAWRENCE, journalist with the online Independent Australia publication has led our media campaign. Tess has been inspirational and she writes with such pathos and conviction. Without her assistance, we would not have won this first fight to establish our unity.

If you have not done so already, I encourage you to log on to the Independent Australia web page and their Facebook page to read Tess’s articles and all the comments you have made which are added below. I am sure you will immediately gain the sense of anger and betrayal that has been under the surface for many years.  Tess has provided a voice for all of us to speak out.

Those links are as follows:

Finally, we have breached the code of silence by the major media outlets and in yesterday’s (2nd July) Daily Telegraph (syndicated in other News Corporation publications around Australia), Gemma Jones has written an excellent article on our situation. It is hoped that this will galvanize the other major media outlets into action. In the interim, we should take advantage of this story and I encourage you to send your letters to the Daily Telegraph and other newspapers, referring to the Daily Telegraph article and ask them to follow up on Gemma’s story.

[The link for the Daily Telegraph article is http://www.dailytelegraph.com.au/news/national/a-diggers-true-worth-politicians-are-snubbing-war-heroes/story-e6freuzr-1226085922768]

This morning I was able to give the veteran's side of the story on the ABC’s popular Sunday morning radio show Australia All Over, hosted by Ian McNamara. There will also be an article in the Northern Services Courier early next week. Word is filtering out, but we must do much more to make every Australian aware of this great injustice to former serving men and women.

We acknowledge the courage and integrity of Ian McManus, a former ALP member in the NSW Government  and a former Veteran, who has come out publicly to support us. Thanks Ian.

Contributions to the exclusive editorial in the Independent Australia clearly demonstrate the growing groundswell of discontent and anger within the Defence community, including former members and serving members, as well as the general public. The fact that their plight has not been covered adequately by the national media is inflaming their sense of betrayal.

Regardless of this situation, WE MUST AND WE WILL WIN THIS BATTLE as we owe it to all past, present and future members of the ADF and their families. The media and our politicians are hoping that we will give up the fight as we have done in the past. Do not let this happen!

The battle lines have just been drawn. Please stay the fight with us until the end.

We need your own going support. We need you to stay in touch with us and with each other and remember that there are those who are no longer with us who would expect us — nay, they would demand us to do nothing else.

Evil will only prevail when good men and women do nothing.

Remember, lest we forget. 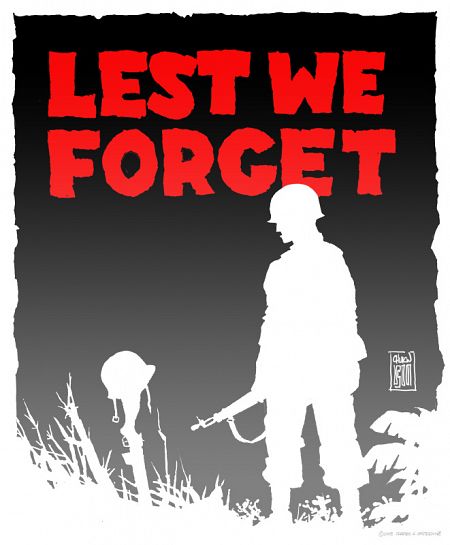