IT MUST BE NICE to have friends in high places. I think last Thursday was the fastest response I've ever had from one of my posts.

That's because the article I published last Thursday detailed and showed evidence that shock jock Ray Hadley has been lying to his listeners and misleading the public in the press. This intentional misleading of the public was based around investigations into the incident at his home last September involving the alleged assault of a child.

In this piece, I included a letter, linked below, I had received from the Parliamentary Secretary for Police on behalf of the Police Minister. That letter stated that the Assistant Police Commissioner Denis Clifford had informed the Ministers office that investigations into the events at the Hadley residence last September were in fact ongoing, despite Ray Hadley’s statements to the contrary. 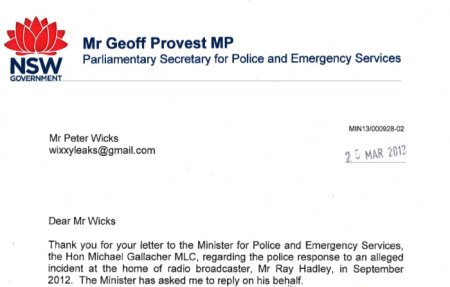 There were a few readers who made comment that what I had expressed was opinion and not fact. To those of you with thinking along those lines, let me just say that our legal system is run on opinion, judges and jury's weigh up facts and then a conviction or acquittal is based on that opinion. Ray Hadley himself has a job based on him stating his opinion, often with little or no evidence to back him up. I was unaware that I was the only person not allowed to have one, no matter how well-informed.

In this matter I have spoken to witnesses of the alleged assault, police, the police media unit, and have had written correspondence from the Parliamentary Secretary on behalf of the Police Minister, who quoted the Assistant Commissioner in his correspondence. I like to think that any opinion I have is reasonably well grounded.

As I have stated previously, I have not heard from the Hadley's despite my request. It is also interesting to note that both Ray and Daniel Hadley refused to make an official statement to police at the time of the alleged incident.

My article was first published on Wixxyleaks at Thursday at 10:55am. By 4:55pm that same day, I had received another response from the office of the Parliamentary Secretary. This one to state that there is "no further criminal investigation" into the alleged assault of a child at the Hadley residence. Below is the letter received at 4:55 pm Thursday 28 March 2013. 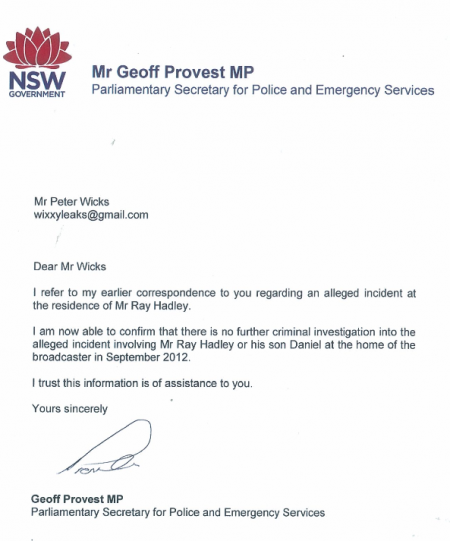 A lot can happen in 6 hours, it would seem.

Five months of investigation, that was still ongoing, according to the Assistant Commissioner, on the 25th March 2013 – just 3 days earlier – was rounded up and finished within six hours of my post hitting the net?

I don't flatter myself that I have that much influence — but I do know of someone who does.

In one of my previous posts on Hadley I spoke about how Barry O'Farrell was quick to come to Ray's defence after a phone conversation was made public that took place during the Athens Olympic broadcast. In the conversation Hadley not only swore a hell of a lot, he was also repeatedly offensive to those with intellectual disabilities, using derogatory terms.

I also spoke of how Hadley likes to brag that he had Police Commissioner Scippione appointed to his position, something I’m sure the Commissioner would like to think he achieved through merit, not through a plug from an on (and seemingly off) air bully.

I don’t want to say Milli Vanilli had more credibility than this absurd claim from Hadley, but I think they may well do.

This time, the rapid response from a parliamentary secretary would indicate the possibility of Hadley "making a few calls", as he sometimes does on his radio show. I wonder who it was that Hadley may have called — the premier, the police minister, the parliamentary secretary? Whoever it was, it would seem the letter was done in a hurry; six hours is awfully quick, considering the last response took 19 days to arrive and I have been told that is considered a lightning fast response from a minister's office. This time, the letter was sent to me from a staffer's email, not the Ministerial email address that the first response was sent from, further indicating a rushed job.

Whatever the chain of events were, it seems to be a case of the tail wagging the dog, and appears to show just how easily the O'Farrell government can be manipulated. 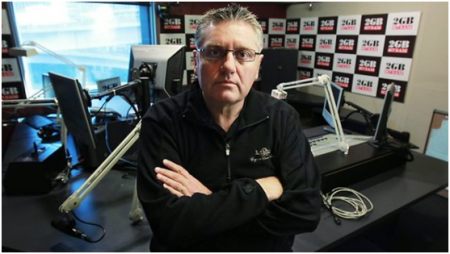 What Thursday's letter doesn't talk about is what is still under investigation relating to Hadley & Son's alleged assault of a child — the internal investigation into the actions of off-duty cop Daniel Hadley. As I mentioned in my earlier article, while Ray was telling the world of police apologies, the local police were telling those involved of continuing investigations — something that was confirmed by the Assistant Commissioner in the original letter from the Minister's Office. The use of careful wording in the second letter makes things as clear as mud.

Thursday's response to my post is something that many would describe as a prime example of a knee-jerk response.

I wonder if I'll receive another email after this one?