You know things are pretty grim in the Coalition bunker when even their corporate sponsors start coming down from their ivory towers to soil their silky smooth hands spruiking unpopular policies.

But so it came to pass last night, when the grey, owlish features of softly spoken banker Michael Chaney appeared on ABC Lateline to, ostensibly, discuss Treasurer Joe Hockey's latest whine that big business should be doing more to sell his unfair and unloved Budget.

Chaney, of course, doesn't need to speak loud to be heard. The chair of the National Australia Bank and Woodside Petroleum has the quiet, condescending air of a man accustomed to being instantly deferred to and obeyed. And he was not to be disappointed in this regard by interviewer Emma Alberici, who handled Chaney with the kid gloves she seems to reserve for VIPs and plutocrats.

As she did in her interview with Roger Corbett days before the September election, Alberici neglected to ask Chaney to declare any relevant affiliations. At that time, Fairfax chair and RBA board member Corbett attacked the previous Labor Government mercilessly during a soft interview by Alberici, only to be photographed the following night at a $500 a head Liberal Party fundraiser hosted by Tony Abbott — his close personal friend and, as it turned out, fellow Liberal Party member.

Is Chaney a Liberal Party member? Apparently not, according to his NAB personal assistant. However, it's quite clear that blue flows through Chaney's veins. Chaney's father was Menzies minister Sir Fred Chaney, and his brother is former Liberal Party deputy leader, minister, MP and senator, Fred Chaney Jr.

In any case, why be a member when you hold a mortgage over the party?

Woodside is one of the Liberal Party's biggest donors, with NAB not far behind. Both companies often appear to be almost corporate arms of the tories — such as when former Foreign Minister Alexander Downer was slipped into a cushy job with Woodside just months after he had allegedly arranged for ASIS to bug East Timor on behalf of Woodside during sensitive gas field negotiations.

Chaney's inside connections don't end there. He is also a director of BHP Billiton and a member of U.S. mega-bank JP Morgan's 'International Council'.

But wait, there's more! According to the Power Index, Chaney is also directly involved in setting government policy:

Chaney chaired the Business Council of Australia between 2005 and 2007 and continues to serve on the board of the Centre for Independent Studies, a BHP-funded think tank that believes in, among other things, slashing company tax to 25% and ending “wasteful” social welfare. During the Howard years its scorched earth policies provided the ideological underpinning for WorkChoices.

The “independent” think tank, Chaney concurs, is “very influential behind the scenes in shaping policy in economics, indigenous affairs, in religion … the list goes on”.

In summary, Chaney is a sad-eyed symbol of the crony capitalism hijacking our democracy, described in the Saturday Paper earlier this month by former Independent MP Rob Oakeshott:

Whether it’s tax or carbon or gaming, this is the policy inertia of Australia today. Money is beating our long-term standard of living to death. It has sent many necessary policy reforms to the doghouse, and it keeps many others on the short chain.

Our key decisions for the future of Australia are now being outsourced at a level never before seen. Parliamentary democracy is going through its own sort of privatisation. Bigger dollars come into the party coffers at exactly the same time as less and less of the necessary work gets done. We are trapping ourselves.

There is no heavy lifting in the Budget for business because, as Hockey clearly says:

"We work for the corporate sector."

Indeed, Hockey's North Sydney Forum explicitly provides paid access to the Treasurer for business leaders and industry lobbyists, presumably so they can provide him with direction — something that places Hockey's plaintive cry to big business for assistance into stark relief.

Thus, Chaney's attempt to sell the Budget in his interview with Alberici last night (12/8/14) was instructive as to the moral depths corporatists will sink to try to promote their self-serving attacks upon the poor and underprivileged.

Firstly, in the interview, Chaney complained about the media, the intelligence and understanding of ordinary Australians, and even democracy itself:

One of the challenges is making your voice heard. You know, there's a lot of noise in our society and it's very difficult to get a rational argument out in the public domain....

....there's a tendency, I think, today not to, amongst the population, to engage in serious policy debate. A lot of people don't read newspapers.

.... often you find that the reportage of it is not accurate and it's not thorough and, of course, there are always contrary voices as well....

For Chaney, it seems, there are too many people speaking up and not enough reading The Australian.

Chaney then tried to redefine the meanings of "crisis" and "emergency" to remove these words' usual connotation of imminent danger:

"... one of the things that's really concerned me in all the discussion of the budget is the complaint that I've heard some people make that there is "no crisis": that there was no need for these sort of cuts in the budget, that it's the sign of a cruel government and so on. ... there is a crisis. It's not an immediate crisis, it's a medium-term crisis..."

There never was any budget emergency, obviously. pic.twitter.com/CSuGuMAGn4

Or, in other words, a medium term structural issue that could be dealt with incrementally rather than through immediate swingeing cuts aimed at those least able to afford them.

Chaney must have been furious, then, when Hockey belled the cat in New Zealand recently, saying there was

"... no crisis in the Australian economy."

Chaney next suggested the poor should bear the brunt of any cuts because they pay the least tax and are, according to him, the predominant recipients of government largesse.

"... if you're going to do anything on the expenditure side you end up making changes which disadvantage lower-income parts of the population because it's those parts that are getting all the benefits through the system."

All the benefits? Really?

Curiously, Chaney chose to ignore the billions in subsidies each year doled out to mining companies, such as the one he chairs. He also overlooked superannuation concessions and negative gearing, but when asked about these benefits later in the interview, emphatically declared them to be no-go areas for government.

Another cause of great misery for Chaney is Australia's "extreme" progressive tax system — where the fabulously rich, like himself, end up paying more per capita than the poor and destitute:

"Australia has a very progressive tax transfer system and it's much more progressive than most nations. And, as I say, the OECD described it as an extreme in the spectrum."

Putting aside the fact that this analysis ignores tax avoidance measures operated by multinational companies like those he runs, which often see these organisations paying virtually no tax, what Chaney said about Australia's progressive tax transfer system compared to other nations was simply an outright lie:

Chaney talking nonsense about redistribution in Australia on @Lateline. pic.twitter.com/EB9nXSdSbS

And people living on the breadline may not have been much comforted by this corporate fat cat's analysis of the affordability of the GP co-payment:

"Frankly, I think that a $7 payment to go to the doctor is a reasonable amount."

Yes, things must be looking pretty desperate for the Libs when filthy rich banker-miners are trotted out to defend their despised Budget.

And if Chaney's dismal efforts yesterday demonstrate the best the plutocrats can offer in selling this deplorable plan for Australia, then it surely won't be long before they outsource this job to paid professionals — after all, they've done it before.

Get ready for the same sort of big business funded advertising blitz that killed the mining tax. If it's not in production yet, you can bet your bottom dollar, it's coming.

How about this way of solving the medium term budget shortfall (not crisis or emergency), Chaney: TAX THE RICH. #lateline 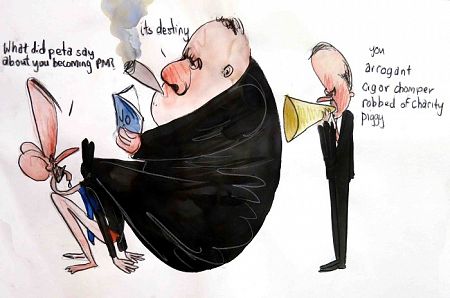